WARSAW, Poland (AP) — The Latest on the 80th anniversary of the start of World War II (all times local):

But his Foreign Ministry tried to make sure the Soviet Union’s role in ending the war got acknowledged at least.

The ministry tweeted on Sunday: “One may have varying opinions on Soviet policy during the initial period of World War II, but it is impossible to deny the fact that it was the Soviet Union that routed Nazism, liberated Europe and saved European democracy.”

Depending on your definition of “liberated”.

If liberated is a synonym for “enslaved”, he has a point.

Germany would never have invaded Poland without the Molotov-Ribbentrop pact.

In every way imaginable. Most east Europeans preferred the Nazis to the Russians.

A Polish soldier has a clear shot at both a German soldier and a Russian soldier. Which one does he kill first?

The German. Business before pleasure.

When World War 2 broke out the Soviet Union was on the Nazi side. Do they really want to be reminded of that?

For the first twenty one and a half months of the war, the Soviet Union was allied with Nazi Germany.

tldr; does the article start with Russia negotiating a ‘nonaggression pact’ with Germany?

Good joke. I must say there are few occasions for you to use it. This is the perfect time.

28 posted on 09/01/2019 3:28:50 PM PDT by frank ballenger (End vote fraud & harvesting,non-citizen voting & leftist media news censorship or we are finished.)
[ Post Reply | Private Reply | To 23 | View Replies]
To: CondoleezzaProtege
The Russian minister should be reminded of what Stalin, in a rare moment of honesty, said on the subject:

"The United States is a country of machines. Without the use of these machines through Lend-Lease, we would lose this war."

While the Russian soldiers did most of the dying and most of the killing of Germans - that is not what won the war!

That the minister ignores the fact that the US and UK were solely responsible for the ever expanding destruction of Germany's war industry and the scale and importance of US Lend Lease to the USSR's ability to wage any kind of war against Germany.

That quote and the below figures can be found in "Russia's Life-Saver: Lend-Lease Aid to the U.S.S.R. in World War II" byAlbert L. Weeks.

Some of the figures on US Lend Lease to the USSR:


And there was much more.

In short, the USSR could not have supplied and transported its army without Lend-Lease. And they would have faced a German army infinitely better supplied than allied bombing rendered them.

I recently bought a number of WWII dvds (I am a dvd watching Luddite). One set is the Frank Capra film series Why We Fight. The volume on Russia is long and detailed and quite exciting. But of course the malarkey about the great friends the Soviets and their strong leaders (the murderous psychopath Stalin) helping us defeat the Nazis is hogwash.

The Russians decided to hold out no matter what and in being forced farther and farther eastward they did a nearly total scorched earth mission. Buildings, farmland, forests, railroads, towns all were blown up and burned. They would leave the Germans blackened empty lands to “conquer” and the Russians would later advance against them.

Worth watching on YouTube or somewhere. Also great stuff earlier on Germany,Japan and Italy all getting their young students to learn to be honored to sacrifice their very lives for the chance to die for their imperial leaders, versus the same era in the US where “freedom, religious liberty and the chance for the individual to live and excel as they choose” is described.

30 posted on 09/01/2019 3:38:24 PM PDT by frank ballenger (End vote fraud & harvesting,non-citizen voting & leftist media news censorship or we are finished.)
[ Post Reply | Private Reply | To 1 | View Replies]
To: CondoleezzaProtege
The greatest builder of Communism in world History was Adolf Hitler. He gave to the Soviet Union the on thing they've never had before or since in its godless murderous history- the moral high ground.

BTW, let's see what the Soviets were doing about 80 years ago at this time. 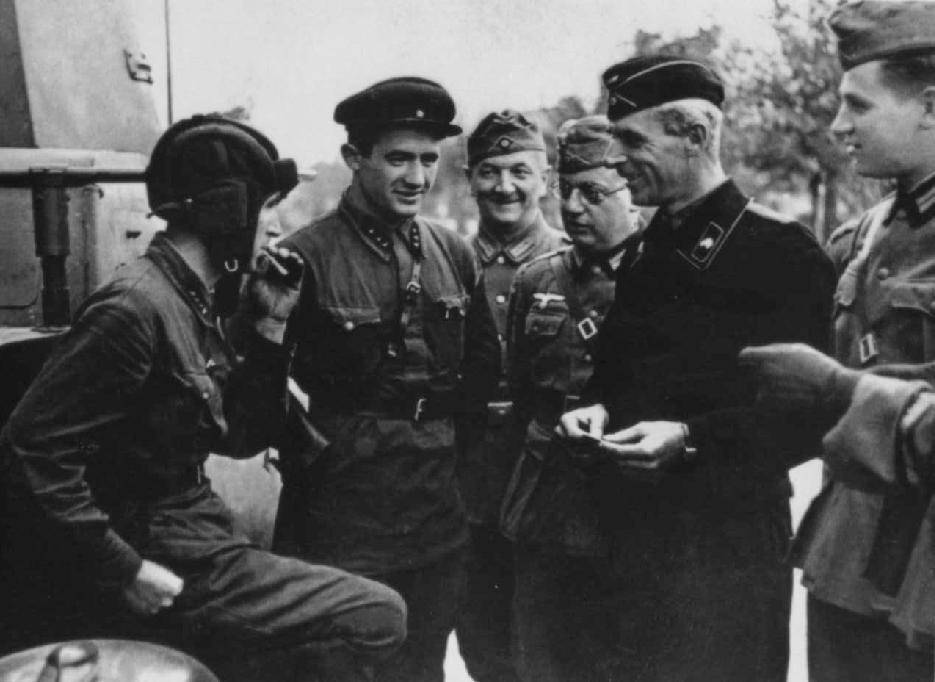 They did at first, then when the true nature of the Nazis became evident they were not so happy. It was a no win situation.

And there is that Katyn thing where the best of the Polish Officer Corps was murdered by the Soviets. Forgotten history.

And most important of all... Spam.

People seem to think the world revolves around Europe.
WWII started when the Japanese invaded China.

Each leader was uniquely evil. As to the Russian masses, never underestimate their suffering and sacrifices in defeating the Nazis.

36 posted on 09/01/2019 5:01:41 PM PDT by buckalfa (Earth First ! We Will Strip Mine The Other Planets Later !)
[ Post Reply | Private Reply | To 12 | View Replies]
To: CondoleezzaProtege
“One may have varying opinions on Soviet policy during the initial period of World War II, but it is impossible to deny the fact that it was the Soviet Union that routed Nazism, liberated Europe and saved European democracy.”

How about we start the clock even earlier? Germany, even before Hitler, was paying Soviet Russia big bucks for doing things that were against the Versailles Treaty. Then you can add to all of the other baggage from the Non-Aggression Treaty, the confidence of peace which gave Stalin the ability to continue the purges of his military that led to a lot of his self-inflicted casualties.

So sorry Comrade, your protests are found wanting!

Oh, and that final bit on the European Democracy? The dead of Hungary, E.Germany, Poland etc in the decades of 1950-1989 echo their cry to the heavens!

I appreciate the fight the individual Soviet Soldiers put up when their backs were up against the wall.

But what set in stone my views on The Soviet Union and WWII was the wrectched and inhumane treatment they visited on their own soldiers after the war.

I understand(but do not condone) the Soviets treatment of German POWs, but the treatment of their own solders who were captured and repatriated was one of the cruelest treatment a governement has visited on its own citizens in modern history.

Those Soviet men had fought in bloody, ungodly conditions against better trained and equipped German soldiers (at least initially) then, after capture, were subjected to worse treatment than the Jews in concentration camps

Astonishingly, there are many instances of Jewish concentration camp prisoners (on edge of starvation and murder themselves) who were able to actually muster real pity for the Soviet POW’s whose paths they often crossed during both of their journeys through Nazi Hell.

The Jews saw that the Soviet POWs breathed air at the even more tenuous whims of German guards than they themselves did, which is a damning statement of German treatment of Soviet POWs.

But even more astonishingly inhumane and cruel than German treatment of Soviet POWs was the Soviet treatment of those same men, their own men who were released after spending years in Nazi Hell. Those men, who probably had all hope die in them of ever seeing their home and loved ones again extinguished at the hands of the Nazis, only to flame up again when they were freed. Then they were rounded up, confused, and shot, disappeared, or sent off to Gulags never to be seen again.

Some few made it all the way back and into the arms of their loved ones, only to have the authorities round them up again and shipped off the Gulag where they were never seen again. And a minicule number made it out of the gulag after 20 years, some even having fivers or tanners slapped on to the top.

It is THAT heinous treatment which makes me despise the Soviet Union and taints any good they were able to impart on anything, even up to (but probably not including) any American lives that may have been lost without the involvement of resources the Germans had to divert to the Western Front.

In my mind, that is pure, concentrated, sadistic evil, what they did to their own POW’s.

In that light I would say to anyone campaigning for acknowledgement of a greater role played by the Soviet Union for ending the war (when it comes from anyone willing to share that credit with the government) can go pound sand. I can respect the individual Soviet soldier who fought to live, and acknowledge with genuine sadness the loss of so many Soviet lives civilian and military, but anything beyond that is corrupted for me.

38 posted on 09/01/2019 5:14:49 PM PDT by rlmorel (Trump to China: This Capitalist Will Not Sell You the Rope with Which You Will Hang Us.)
[ Post Reply | Private Reply | To 1 | View Replies]
To: CondoleezzaProtege
Did they remind us all how they'd have fought the war with sticks, rocks and empty vodka bottles if the USA hadn't given them $10 BILLION 1940 USD thru Lend-Lease?

As a nation they didn't have the hard specie to fund a Boy Scoustki troop, much less a war. Without the US's backing they might just as well have given Stalingrad AND Moscow to Hitler because they'd have done well to stop the Nazis before Vladivostok.

39 posted on 09/01/2019 5:20:32 PM PDT by Paal Gulli
[ Post Reply | Private Reply | To 1 | View Replies]
To: CondoleezzaProtege
but it is impossible to deny the fact that it was the Soviet Union that routed Nazism, liberated Europe and saved European democracy.”

FU Ruskies! If it were not for the American Arsenal of Democracy and blood and grit of our military Hitler would have eventually routed the red scum. Patton was correct in wanting to kick the Soviets back to their border. Our idiotic government thought differently.