Was Mitsud working for the US govt?

Did the US Govt hire any foreign persons to approach anyone in the Trump campaign? Who were they and what were they paid? How long were they active?

Was it true that in early 2017 you and the FBI stopped the surveillance of Carter Page? Meaning there was no Russian connection?

What foreign intelligence services were contacted and used in connection with this investigation against the Trump campaign and Administration?

What foreign persons or organizations were paid by the US government in this Mueller investigation?

Was the unverified Steel dossier actually used as evidence in a FISA warrant? If true, that action has put all our constitutional rights in jeopardy. When Hillary Clinton can launder money through a law firm to buy Russian concocted lies to frame a President the we are a long way from the Founders. Don’t you agree?

Why wasn’t the dossier verified? It is standard FBI practice, yet it was ignored, why?

Is it true that you had testimony that Putin in fact tried to get a hold of President-Elect Trump but was unable, and no one on the Russian side had his contact details? Some collusion! You knew from the beginning that collusion was a lame horse that wasn’t making the finish line.

When Strozk texted his girlfriend, Lisa Page, and said that “there was no there there” in the Mueller investigation, would you say he knew there was nothing to be found and the whole thing was a joke and a waste of investigative talent?
Which, by the way, all came out to be true.

Were Trump’s phones tapped? Why? From when to when?

Who are your team spoke to the press in the past 2 years?

Did you or anyone on your team leak information to the press in the past 2 years? What precisely was leaked, and for what reason? To whom was it leaked? Do you believe we have a right to know, as you are agents of the American people?

Did you have sign off from the Deputy AG, Rod Rosenstein, to release information to the press?

Did you try to get Manafort to testify against Trump?

He said you wanted him to make up stories about Trump, and from the previous unethical actions of Andrew Weissman in Enron, and the others in the Senator Ted Stevens frame up, it is clear the lawyers you have chosen have serious ethical problems. I would point you to the book “Licensed to Lie” by Sidney Powell. It explains your teams moral faults in exquisite detail.

You arrested Manafort at 6 AM at gunpoint, for a tax violation that the government had previously refused to prosecute. Was that necessary? Sounds like the FBI is being
politicized, and using terror tactics to attack people for political reasons?

Strozk had a vendetta against Trump, and he was the lead investigator against Hillary Clinton? You don’t see an issue in this? This much blatant political hatred in the FBI is destructive - don’t you agree.

If the FBI threatens our Democracy again like it did with Strozk and McCabe - should it be dismantled? What are the checks and balances? Comey acts like chief investigator and then makes himself AG when he decides to prosecute or not? Loretta Lynch says nothing? Is this how a DOJ is supposed to work. The whole mess looks like a drum kit falling down the stairs. It has to be cleaned up!

When did you know there was no Russian collusion?

When do Prosecutors exonerate anyone? They find a crime or they chase someone else. We are not guilty until proven innocent, but innocent until proven guilty. You could not prove Trump’s guilt, so that means he is innocent in America. We are not trying people in the press, or in the Soviet Union. Why do you have a lot of superfluous dirt in the report? This was a smear tactic. If you have proof of a crime then say so, else, this is a political document, not a legal one.

Trump could have claimed executive privilege but was very open with millions of pages of documents. Don’t you agree?

Had he hampered your investigation in any way?

Did he threaten witnesses like you lead attorney Andrew Weissman did, on many occasions?

Do you think having 14 Democrat lawyers didn’t bias your investigation? Can you imagine how people would react if Hillary faced 14 Republican lawyers?

Why did you delay prosecution of Russian Uranium bribery until the Uranium One deal was long closed? Was that a favor for Hillary?

You had knowledge of the Russian felonies during Hillary’s pushing that deal, yet you said nothing? Why?

Why did Comey issue immunity letters to everyone surrounding Hillary? Like Bryan Pagliano. The government received no proffer from them, so Comey basically granted them immunity for nothing. Was it to protect Hillary? How many immunity letters were granted to the Trump campaign? None? What a coincidence.

Hillary destroyed thousands of emails, and her unprotected server was attacked by foreign intelligence services - yet she committed no crime, and was not even charged? How can that be?

The DNC servers were not inspected by the FBI yet you say they were hacked by Russian agents - you have no proof, except the word of the head of Crowdstrike. Aren’t you friends with the owner of Crowdstrike? On something as severe as Russian meddling and accusing the President of treason - the FBI and your team takes the word of biased 3rd parties to make cases for them? And you never verified?

Which Russian agents have you prosecuted in connection with the election meddling? Is one person in jail? It sounds like it was all blow and no show? It was a giant head fake.

Why didn’t Brennan, Clapper, or Comey try and stop the Russian meddling if it was so pervasive and evil? Obama did nothing, and Rice told her team to stand down, do you have any comment?

Why did you delay prosecution when a Russian media group sought to defend itself, and you claimed the government was not ready when you had just brought the indictment? Sounds like it was a PR stunt that backfired.

Russia collusion against Trump was a hoax, and what you have proven in 2 years really couldn’t fill a thimble. Some hokey websites that you claimed reached 80 million people.
That is all you have? This was a waste of time and our money, all to destroy a president. How do you feel about being a patsy for the Democrats?

Mueller handed the dems a report with a list of possible obstruction things for the dems to follow up with, but they are flailing and the public has lost interest. Now they have to go back to him and have him step them through it again.

“Mr. Mueller, do these items constitute obstruction, in your opinion?”

“Well, I think they could be evidence of obstruction, yes, in my opinion, they might be, it’s possible.”

Since the two House committees and Mueller are all under the Deep State’s dominion, we may be sure the scheduling is by their design:

The chosen timing is no accident, but since 7 is Trump’s number, it could be construed that Mueller is the 1 in the middle.

In any event, it’s set to be a hinge moment!

He needs to sober up fast, and get briefed on the Mueller Report by Andrew Veismann or he will come across as an incompetent drunk.

Meanwhile, how many people are being murdered in Democrat run cities every week while they waste their efforts on this nothing burger rather than try to fix the problems in the cities they run? 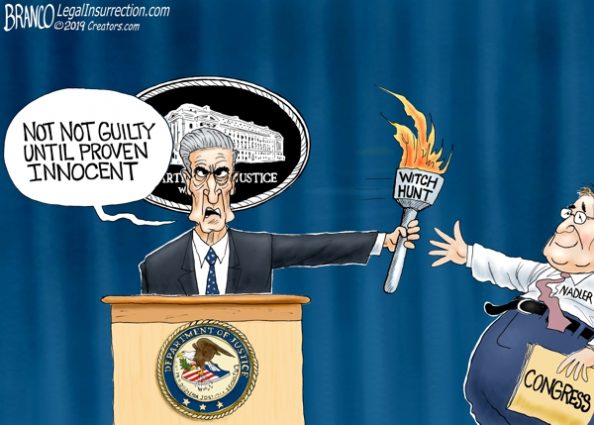