1 Some time later God tested Abraham. He said to him, “Abraham!”

“Here I am,” he replied. 2 Then God said, “Take your son, your only son, whom you love—Isaac—and go to the region of Moriah. Sacrifice him there as a burnt offering on a mountain I will show you.”

3 Early the next morning Abraham got up and loaded his donkey. He took with him two of his servants and his son Isaac. When he had cut enough wood for the burnt offering, he set out for the place God had told him about. 4 On the third day Abraham looked up and saw the place in the distance. 5 He said to his servants, “Stay here with the donkey while I and the boy go over there. We will worship and then we will come back to you.”

6 Abraham took the wood for the burnt offering and placed it on his son Isaac, and he himself carried the fire and the knife. As the two of them went on together, 7 Isaac spoke up and said to his father Abraham, “Father?”

“The fire and wood are here,” Isaac said, “but where is the lamb for the burnt offering?”

8 Abraham answered, “God himself will provide the lamb for the burnt offering, my son.” And the two of them went on together.

9 When they reached the place God had told him about, Abraham built an altar there and arranged the wood on it. He bound his son Isaac and laid him on the altar, on top of the wood. 10 Then he reached out his hand and took the knife to slay his son. 11 But the angel of the Lord called out to him from heaven, “Abraham! Abraham!”

12 “Do not lay a hand on the boy,” he said. “Do not do anything to him. Now I know that you fear God, because you have not withheld from me your son, your only son.”

13 Abraham looked up and there in a thicket he saw a ram caught by its horns. He went over and took the ram and sacrificed it as a burnt offering instead of his son. 14 So Abraham called that place The Lord Will Provide. And to this day it is said, “On the mountain of the Lord it will be provided.”

15 The angel of the Lord called to Abraham from heaven a second time 16 and said, “I swear by myself, declares the Lord, that because you have done this and have not withheld your son, your only son, 17 I will surely bless you and make your descendants as numerous as the stars in the sky and as the sand on the seashore. Your descendants will take possession of the cities of their enemies, 18 and through your offspring all nations on earth will be blessed, because you have obeyed me.” 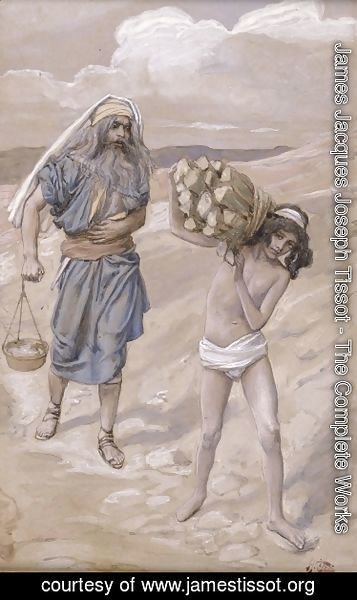 by JAMES TISSOT
"Isaac Bearing the Wood for His Sacrifice" 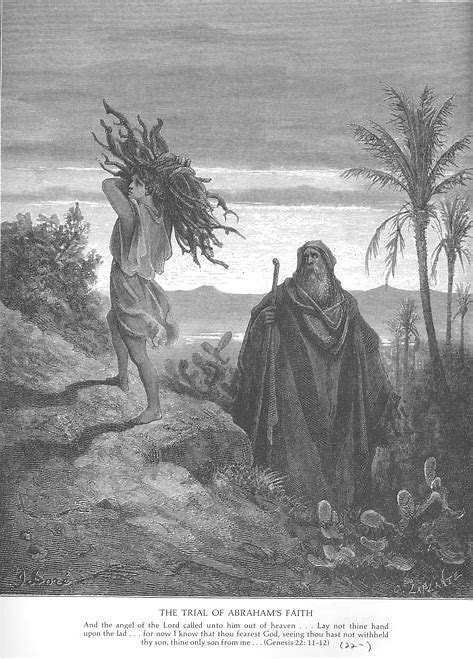 by GUSTAV DORÉ
"The Trial of Abraham's Faith"

From a 19th Century Bible 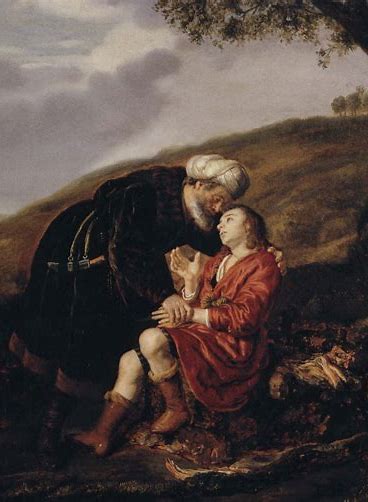 by JAN VICTORS
“Abraham and Isaac Before the Sacrifice” 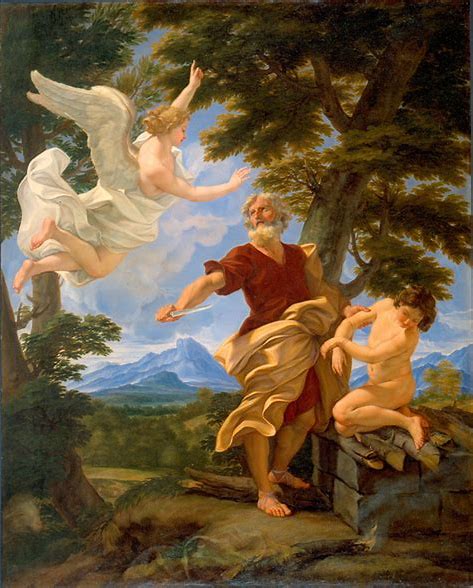 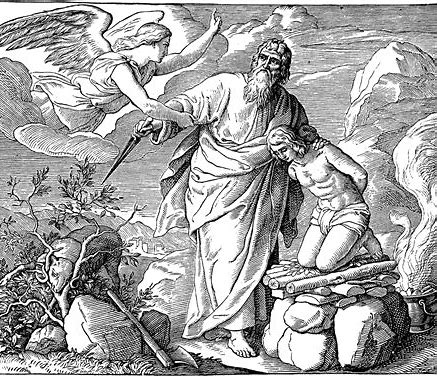 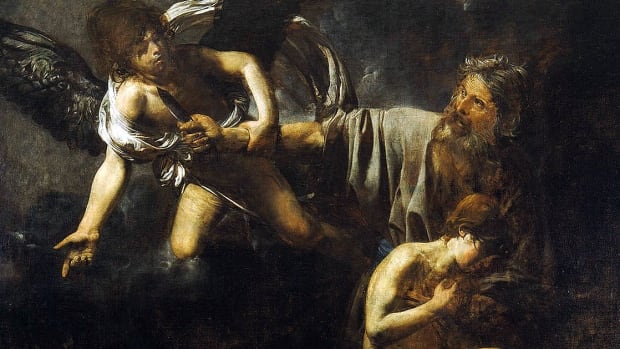 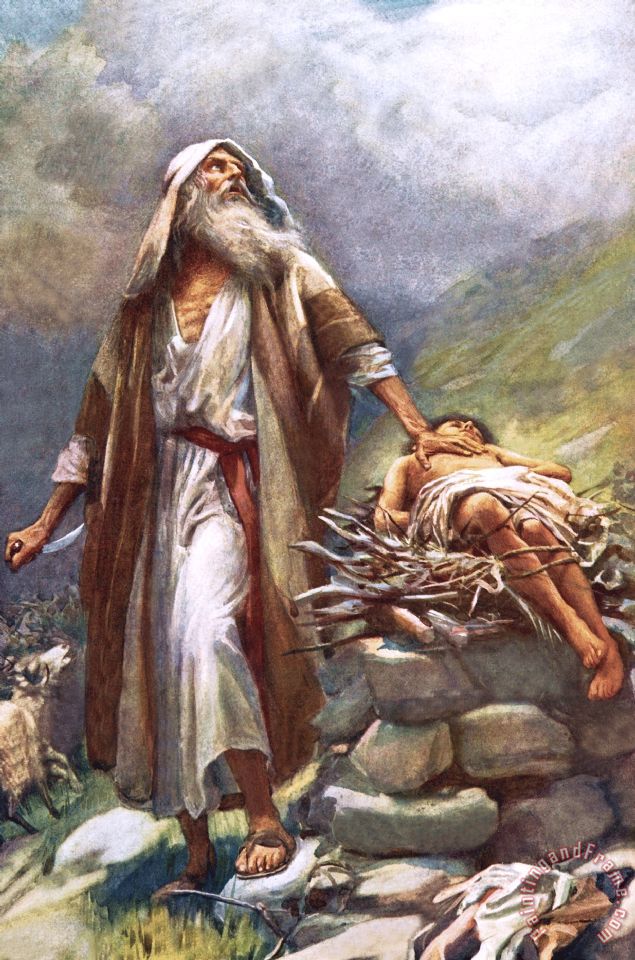 by HAROLD COPPING
”Abraham and Isaac” 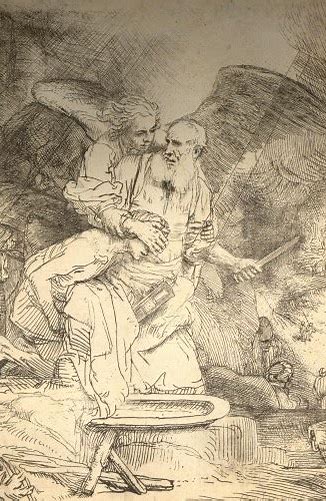 by REMBRANDT VAN RIJN
“The Sacrifice of Abraham” 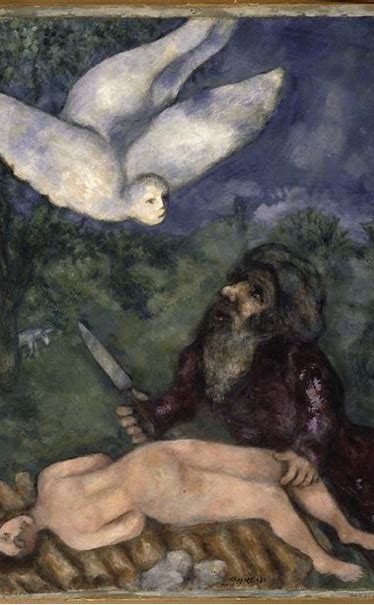 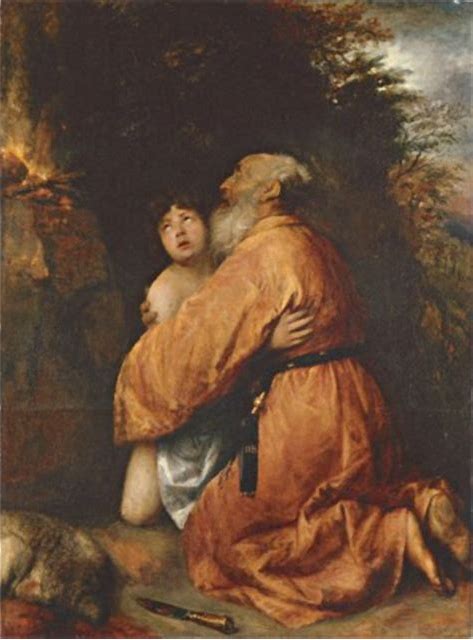 by JAN LIEVENS
“Abraham and Isaac” 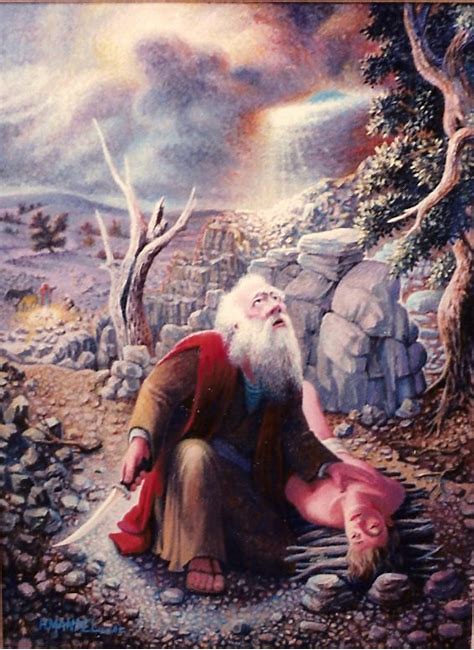 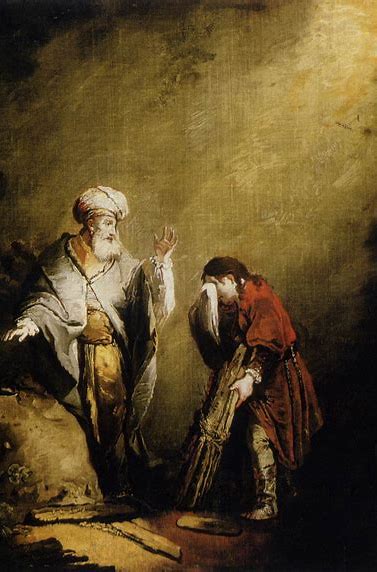 by CHRISTIAN WILHELM ERNST DIETRICH
“The Sacrifice of Isaac” 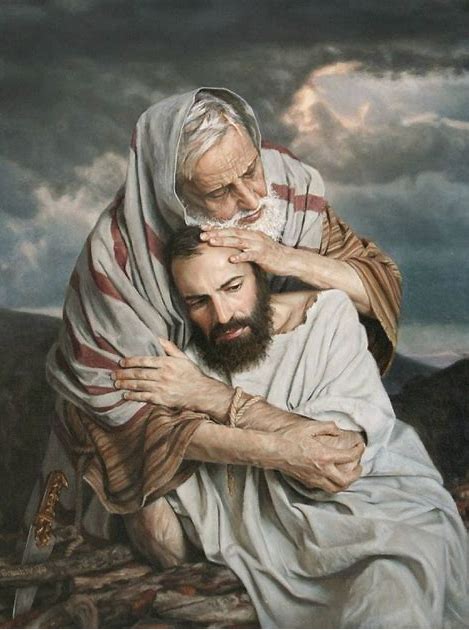 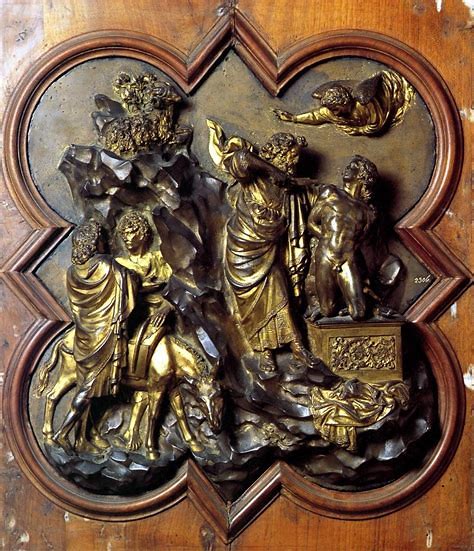 “The Sacrifice of Isaac” 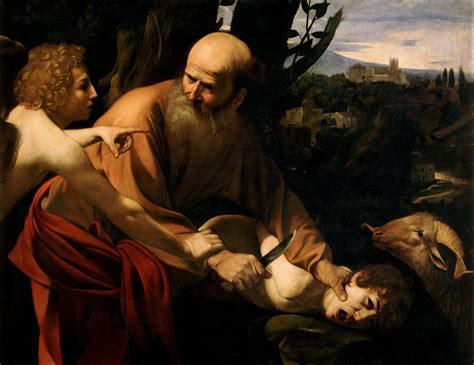 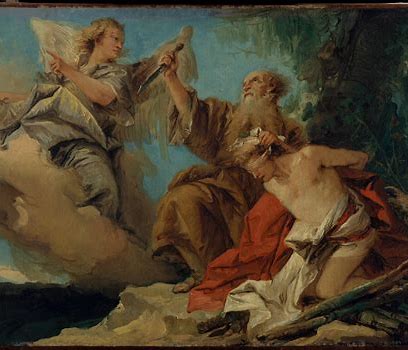 by GIOVANNI DOMENICO TIEPOLO
“The Sacrifice of Isaac” 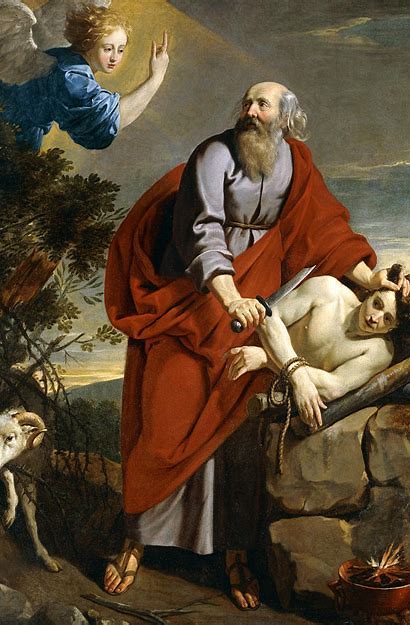 by PHILIPPE DE CHAMPAIGNE
“The Sacrifice of Isaac” 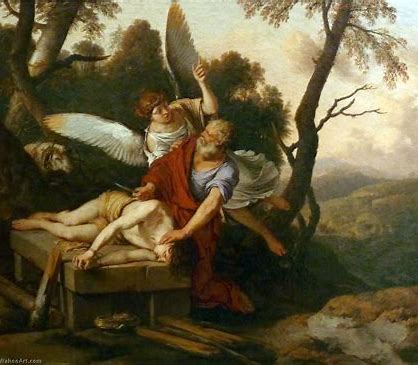 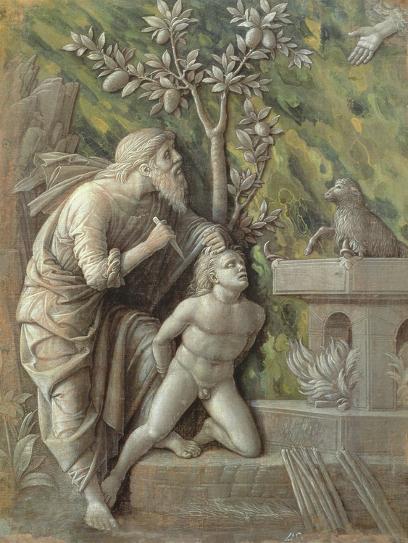 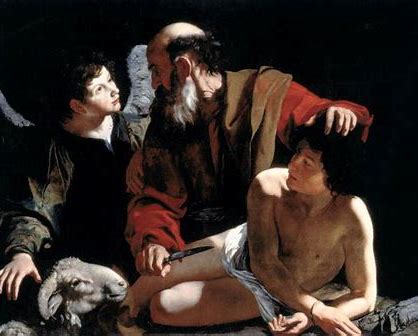 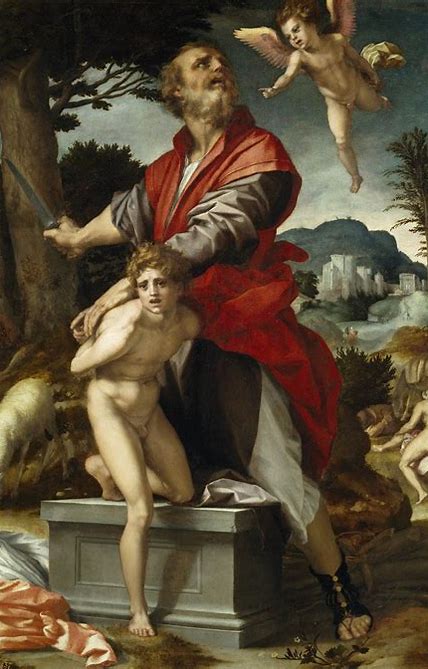 by ANDREA DEL SARTO
“The Sacrifice of Isaac” 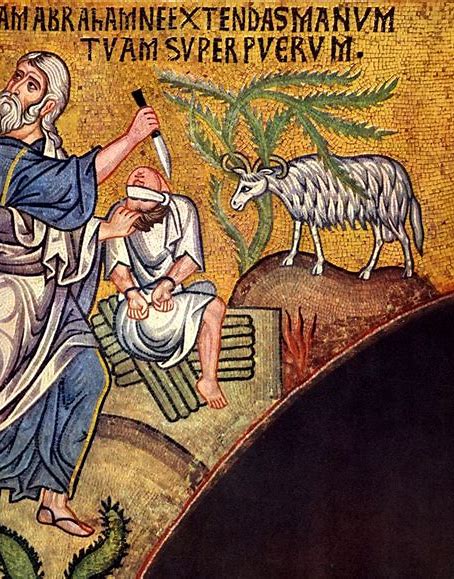 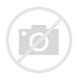 Matthew 3:9 ( & Luke 3:8) And do not think you can say to yourselves, ‘We have Abraham as our father.’ I tell you that out of these stones God can raise up children for Abraham.

Romans 4:3 What does Scripture say? “Abraham believed God, and it was credited to him as righteousness.”

Romans 4:18 Against all hope, Abraham in hope believed and so became the father of many nations, just as it had been said to him, “So shall your offspring be.”

Galatians 3:7 Understand, then, that those who have faith are children of Abraham.

Galatians 3:29 If you belong to Christ, then you are Abraham’s seed, and heirs according to the promise.

Hebrews 11 17 By faith Abraham, when God tested him, offered Isaac as a sacrifice. He who had embraced the promises was about to sacrifice his one and only son, 18 even though God had said to him, “It is through Isaac that your offspring will be reckoned.” 19 Abraham reasoned that God could even raise the dead, and so in a manner of speaking he did receive Isaac back from death.

James 2:21 Was not our father Abraham considered righteous for what he did when he offered his son Isaac on the altar?

MY COMMENTARY
DID ABRAHAM FORCE ISAAC ONTO THE ALTAR, OR DID HE PERSUADE HIM?

With few exceptions these artists portray Isaac as being only ten or twelve years old, subtly implying he was forced onto the sacrificial altar by his overbearing and overpowering father. I disagree. I suggest Isaac was strong and vigorous--certainly able to carry the wood!--who went willingly to his death because it was his father’s will.

As Jesus did. Abraham and Isaac are types--symbols--of the Father and Son. When we meet them in heaven, it will be not only Abraham's famous faith, but Isaac's also, we shall so admire. May we learn from and emulate them now!

Again, here is the Bing page "ABRAHAM SACRIFICES ISAAC IN ART”,
with many more images. Also, here are links to compendia of
three masters who painted Biblical scenes prolifically:
REMBRANT van RIJN
GUSTAV DORÉ
(241 wood engravings for La Grande Bible de Tours)
JAMES TISSOT
Finally, here are links to the
PREVIOUS POSTS IN THIS SERIES
SNEAK PEEK: Next time,
ABRAHAM FINDS ISAAC A WIFE!
TOPICS: Apologetics; General Discusssion; History; Theology
KEYWORDS: bible; paintings
I am surveying "Bible art" for my own amusement and learning (at the Spirit's prompting) and thought others might enjoy it, too. The Bible encourages us to meditate on it (Ps. 1:1-3, 119:11-16, etc.), and these artists have done so and their works can assist us and enrich our own thoughts about biblical characters and incidents and concepts. My intent is to proceed methodically left-to right, Genesis to Revelation, as the Lord wills. Back soon with another.

But it is not only oil-on-canvas that can so help us; I refer to the astonishing video series The Chosen, which strolls through the four Gospels at the most leisurely pace. The eight episodes of Season 1 are finished, and the second of a planned seven seasons is coming soon. I say "leisurely" because after an entire year Jesus still has only seven of the apostles (although He's preparing to call up Thomas from the minor leagues--but Thomas is skeptical, of course). Anticipating a canvas of fifty-plus hours instead of a movie's paltry two hours, The Chosen turns the characters (including Jesus!) into three-dimensional humans and brings the Gospels alive--you have never seen anything even remotely like it! Here is the Official Trailer.

To be added, either reply here or FRmail me.

This was a reassuring Scripture this morning. Galatians 3:29 If you belong to Christ, then you are Abraham’s seed, and heirs according to the promise.

Abraham, although he was as flawed as we are, nevertheless is truly our Father in the Faith.