An ancient merchant had three lovely daughters. But due to a tragic turn of events, he had lost all hope that his daughters would be able to marry and live a happy life. It was the third century, and this businessman had lost his fortune when pirates pillaged his ship. His beautiful daughters were of marrying age, and without money he could give them no dowry.

In those days, young women without a dowry had few options for survival. Many were forced into slavery or prostitution.

The father prayed around the clock that somehow God would grant a miracle for his family. A young Christian bishop discovered the plight of this man and his daughters. This bishop was a wealthy man, having received a large inheritance at the death of his parents. One evening, in the middle of the night, the bishop secretly slipped a sack of gold through a window into the merchant's house. This timely gift saved the virtue of the man's oldest daughter.

Anticipating a third gift of gold, the father determined to discover who was helping his family. He stayed up all night and when the sack was dropped through the window, the father ran down the road and apprehended the mysterious benefactor. The merchant immediately recognized the young bishop and tried to give thanks to him.

The humble minister deflected the praise. "No, all thanks go to God, not to me."

The father answered, "I need to let everybody know you did this."

The bishop responded, "No, you must promise me that not until I'm dead will you let anyone know how you received the gold." This compassionate bishop believed literally Christ’s injunction that when we give, we should do so in secret, sacrificially in Christ’s name and not our own.

The merchant promised that he would tell no one of the way this minister helped save this family. And it wasn’t until after his death that the world learned the numerous stories of the generosity of this bishop of the early Church, Saint Nicholas.

Through his timely gifts, Saint Nicholas helped to restore the hope of this family, and hundreds more in his community. But the ministry of Bishop Nicholas extended beyond giving gifts. History tells us that he was persecuted by the Roman authorities and imprisoned for his faith. Later, when Emperor Constantine made Christianity the state religion, Nicholas boldly defended the doctrine of the Trinity at the Council of Nicea.

Throughout his ministry, Bishop Nicholas selflessly poured out his life and his fortune as he served the people in and around his home.

The story of our modern Santa Claus begins with this same Nicholas, who was born during the third century in Patara, a village in what is now Demre, Turkey. His wealthy parents raised him as a Christian. But they died in an epidemic while Nicholas was still young, and he was left with their fortune. Obeying Jesus' words to "sell what you own and give the money to the poor," Nicholas used his inheritance to assist the suffering, the sick, and the poor.

During the persecution of Christians by Roman Emperor Diocletian, Bishop Nicholas was exiled and imprisoned along with thousands of other Christians. Though he suffered for his faith in Jesus Christ, mercifully Nicholas survived this persecution and was eventually released.

After returning to his post as bishop, Nicholas was called upon to defend Christianity against the heresy of Arianism. A contemporary of Nicholas and an early church theologian, Arius taught that God the Father and God the Son did not exist together eternally. Arius also taught that the pre-incarnate Jesus was a divine being created by (and possibly inferior to) the Father at some point, before which the Son did not exist.

Tradition tells us that Nicholas vigorously fought Arianism, and was listed as a participant in the First Council of Nicaea. This important gathering, held in Nicaea in Bithynia (present-day Iznik in Turkey), was convened by the Roman Emperor Constantine I in 325 A.D. This was the first ecumenical council of the early Christian Church, and it produced the first uniform Christian doctrine -- the Nicene Creed.

It is also believed that Nicholas participated in the destruction of several pagan temples, among them the temple of Artemis. Because the celebration of the goddess Diana's birth is on December 6th, some have speculated that this date was deliberately chosen for Nicholas's feast day to overshadow or replace the pagan celebrations. But December 6th is also listed as the date of Nicholas's death, which is more likely the reason the feast is celebrated on this day.

Through the centuries St. Nicholas has continued to be venerated by Roman Catholics and Orthodox Christians -- and he is honored by Protestant Christians. By his example of generosity to those in need, St. Nicholas is a model of Christ's call to selfless giving.

Widely celebrated in Europe, St. Nicholas' feast day on December 6th kept alive the stories of his generosity and kindness. In Germany and Poland, boys dressed as bishops begged alms for the poor. In the Netherlands and Belgium, St. Nicholas arrived on a steamship from Spain to ride a white horse on his gift-giving rounds.

December 6th is still the main day for gift giving in much of Europe. In the Netherlands, candies are thrown in the door, along with chocolate initial letters, small gifts, and riddles. Dutch children leave carrots and hay in their shoes for St. Nick's horse, hoping it will be exchanged for gifts. Simple gift-giving on St. Nicholas Day helps to preserve a Christmas Day focus on the Christ Child.

The story of St. Nicholas was almost forgotten during the 16th century as Protestants downplayed the veneration of the saints. Both reformers and counter-reformers tried to eliminate the customs of St. Nicholas' Day, but they had very little long-term success.

Because the common people loved St. Nicholas, he survived on the European continent as people continued to place nuts, apples, and sweets in shoes left beside beds, on windowsills, or before the hearth.

The first Europeans to arrive in the New World brought the story of St. Nicholas with them. The Vikings dedicated their cathedral to him in Greenland. On his first voyage, Columbus named a Haitian port for St. Nicholas on December 6, 1492. In Florida, Spaniards named an early settlement St. Nicholas Ferry, now known as Jacksonville.

According to the Saint Nicholas Center Web site, after the American Revolution, New Yorkers were looking to break with British tradition, and they remembered with pride the colony's nearly-forgotten Dutch roots. John Pintard, an influential patriot who founded the New York Historical Society in 1804, promoted St. Nicholas as the patron saint of both the society and the city.

In January 1809, Washington Irving published the satirical Knickerbocker's History of New York, which made numerous references to a jolly St. Nicholas character. This was not a saintly European bishop, but rather a Dutch burgher with a clay pipe. The jolly elf image received a big boost in 1823 from a poem destined to become immensely popular, "A Visit from St. Nicholas," -- now better known as "The Night Before Christmas."

In North America, the popular name Santa Claus was taken from the Dutch Sinterklaas, which originated with a contracted form of Sint Nicolaas (Saint Nicholas). The "Mall Santa" that we are all familiar with -- sporting a red suit with white cuffs and collar, and black leather belt, became the popular image in the United States in the late 19th century and early 20th century because of the "Merry Old Santa Claus" images created by political cartoonist Thomas Nast.

Beginning in 1863, Nast began a series of annual drawings in Harper's Weekly that were inspired by the descriptions found in Washington Irving's work. These drawings established a rotund Santa with flowing beard, fur garments, and a clay pipe. Nast drew his Santa until 1886, and his work had a major influence in creating the modern American Santa Claus.

In the mid-20th Century a series of Coca-Cola advertisements featuring a rotund and jovial Santa Claus was drawn by artist Haddon Sundblom and further popularized Nast's depiction.

There are, of course, controversial aspects of the American Santa Claus fiction. Some Christians believe he takes the focus of Christmas away from Jesus Christ, placing it on a fictional character with little redemptive value. Others insist that it is unhealthy for parents to lie to their children to enforce their belief in Santa Claus. And others say that Santa Claus is a symbol of the commercialization and consumerism that has seized the Christmas holiday in the West. Still for others, Santa Claus and the modern celebration of Christmas is seen as an intrusion upon their own national traditions.

But beneath all the symbolism and tradition that has been attached to the modern American Santa Claus, he, like so many other "Father Christmas" characters before him can hearken back to a simple Christian bishop who loved God and loved people. Bishop Nicholas displayed his love through the giving of gifts, just as our Heavenly Father gave the gift of His Son to us that first Christmas morning 2000 years ago.

In this season, we celebrate how God gave His Son, Jesus, to bring hope to the world. May each of us prayerfully consider how we, like Nicholas, can give of ourselves to help restore hope to those that God brings into our lives.

To learn more about the life of Saint Nicholas, I highly recommend that you read St. Nicholas: A Closer Look at Christmas by Joe Wheeler and Jim Rosenthal.

The focus is JESUS and a stealthy culture warrior knows you cant detract something huge like that from the scene and expect the nice, semi-sleeping Christian audience to remain asleep:

You have to swap in a SUBSTITITE - Santa, throw in some snowmen.

It is a stealthy way to delete our religious heritage.

In some environs, it isn’t Christmas until “Soul Santa” has been dropped by chopper into the Martin Luther King Blvd barrio.

A very informative and enlightening article.

I still don’t understand why Christians don’t put up a nativity in all their homes. Can you imagine millions of nativity scenes instead of one in front of a court house. I guess people don’t think.

One of my favorite pictures is Santa on his knees looking down on the Christ child. 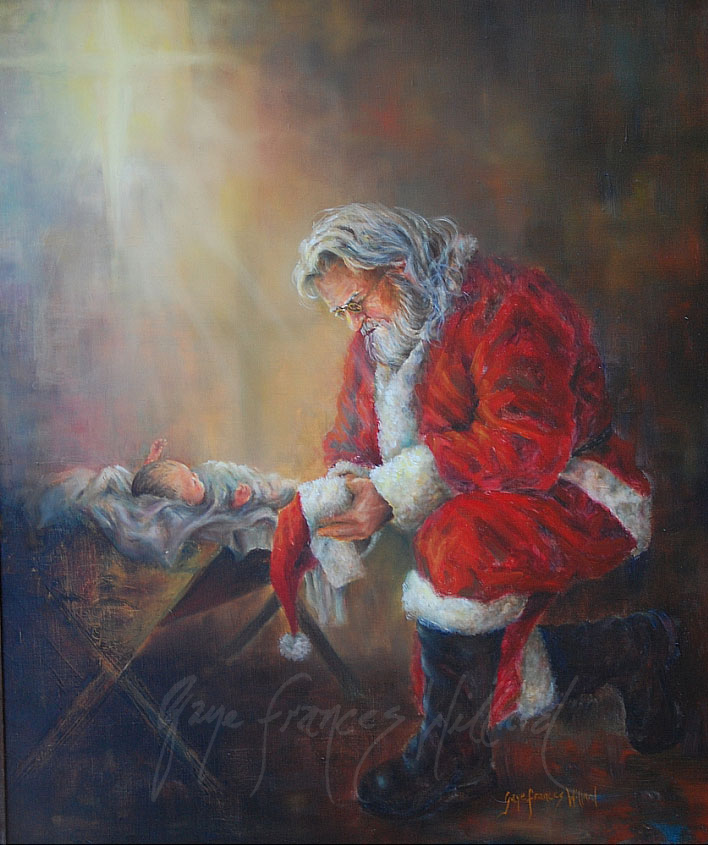