Pope Francis Does the Holy Liturgy

The Words of Consecration and the Pope

(Rome) The Holy See yesterday published the texts and chants for the Pope's Mass on the 4th Sunday after Easter, which Pope Francis will celebrate on April 22 in St. Peter's Basilica. On this occasion, the head of the Church will consecrate several candidates to the priesthood.


Pope Francis will ordain sixteen deacons preparing for the priesthood as priests, sincethe 55th World Day of Prayer is celebrated  at the same time for priestly vocations.

Five of them come from the diocesan seminary of the Diocese of Rome. The number reflects the situation of priestly vocations in the Pope's own diocese.

The other eleven candidates come from other countries and continents. Six come from the Roman missionary college Redemptoris Mater of the Neocatechumenal Way; four from the Famiglia dei Discepoli (Family of the Disciples) and one from the Opera Don Orione. They come from Croatia, Madagascar, Vietnam, Myanmar, Colombia, San Salvador, Romania, India and Peru. Eleven of them, the five candidates of the diocese and the candidates of the seminary Redemptoris Mater,  are consecrated and incardinated for the diocese of Rome.


The words of consecration


According to the announcement, the III. Canon has been chosen. His predecessor Benedict XVI. preferred the Roman canon. [What else is there?] In contrast, Francis varies and also benefits from the new prayers, which were created ex novo only by the liturgical reform of the 60s. Since then, the Anaphora can be said in the vernacular, as will be the case on April 22nd. Benedict XVI. preferred Latin, the language of the Church, and not only at celebrations in the Patriarchal basilicas and in Rome, but also abroad. Conversely, Francis, who also uses the vernacular in St. Peter's Basilica in a solemn Papal Mass and not the Roman Canon.


On April 22, Pope Francis will use the words "for all" to reflect the Latin "pro multis". This contradicts the order of Benedict XVI, who had already prescribed in 2006 binding for the whole world Church as the more appropriate, because closer to the original translation "for many".
The majority of Italian bishops had in prounced for the retention of "for all" in 2010. Benedict XVI. patiently conducted persuasion seemed to bear fruit in early 2013. One of the most persistent opponents, Archbishop Bruno Forte, had assailed Benedict's camp with waving flags defending the "pro multis / for many."


Shortly thereafter, Benedict XVI. made his  surprising resignation known. Since then, there has been a standstill in the rebellious states. Although at that time the Vatican Recognition of the new version of the Italian translation of the Missale was almost complete, it has not been published until today. 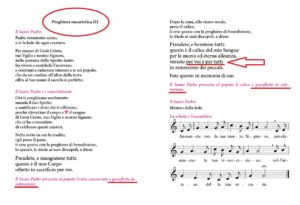 Pro multis The opponents of Benedict XVI.s mandated translation immediately raised their voices after the election of Pope Francis,  especially in the linguistic areas, including the German one, which had already delayed, denied, and boycotted the order under the German Pope, and therefore the new translations had not yet been printed.

Cardinal Karl Lehrmann (Mainz) and Archbishop Alois Kothgasser (Salzburg) complained of Vatican "interference". In April 2013, one month after the election of Pope Francis, the Austrian bishops published a "clarification" that the only admissible translation was "for all" because the only approved German translation of the Missal was that of 1975. The admonition was addressed to the liturgically most sensitive part of the clergy, who began to complain that seven years after Benedict's change, nothing had yet happened.

Pope Francis sent out contradictory signals. From them one could read a supposed support of every position and also the opposite. Most appropriately, his attitude is likely to be reflected in a both-and-also, as he showed it in 2015 within a few days at the Mass celebrations in Cuba and in the US. In both countries he celebrated in Spanish. In Cuba, because it is the national language, in the US once for the large number of Spanish-speaking immigrants. In Cuba he used the words of change "for all" (por todos), in the US the words of change "for many" (por muchos).

The same pope, the same Spanish language, and yet such a difference?

The reason is that the English translation of the Missal was already published at that time, and for pro multis that of Benedict XVI. wanted "for many", while the new Spanish translation was not available at that time and in the old formula the pro-multis was still presented as " for all".


Everyone after his Façon ...?


In other words, every country and its episcopal conference should decide for themselves. A similar instruction was issued by Francis in September 2017. Shortly before he declared the Liturgy reform of 1969 as "irreversible."

His words can be seen at the memorial mass for the deceased cardinals on 3 November 2017 as a confirmation of the position of Benedict XVI. In his sermon , Francis said:


"The 'many who awaken to eternal life are to be understood as the 'many' for whom the blood of Christ was shed. It is the great number of those who, thanks to God's merciful goodness, may experience the reality of eternal life, the perfect victory over death achieved through the resurrection."

But even the Pope does not abide by the law, because in his celebration of April 22, Francis is opposed to the order of Benedict XVI. will say not "many", but "all." An anachronism. The Pope, by virtue of his authority, declares that the words of change are to be pronounced "for many" - that was 2006 -, and 2018, twelve years later, even the Pope does not abide by it, because the responsible Episcopal Conference has not yet re-translated and published the Missal? Absurd.

Francis, however, behaves this way and signals that the question is rather unimportant to him. There would be another way. Those whom Benedict XVI, by deferring to Church Latin, which is unique and includes both "for many" and "for all". But for that, Francis, according to Roman insiders, obviously lacks the necessary liturgical sensitivity. In addition, severe prejudices prevent him from consistently considering such a step.


Regardless of this, the Office of the Liturgical Celebrations of the Pope is adamant that the pamphlets for the consecration should state that the pope "shows the consecrated host to the people and kneels adoringly" and "shows and adores the chalice to the people performing a genuflection."

It is well known that the adoring genuflections have not occurred since the election of Pope Francis. As is well known, it should be known that this is due to knee problems. The fact is that neither Pope Francis nor the Vatican Press Office has made a statement in more than five years of this pontificate. And that despite the importance of the question. The assumptions, allegations or even well-intentioned explanations of individual Vaticanists can not replace an official opinion. However, such is not forthcoming, which is why the Pope standing before the Blessed Sacrament will remain an ambivalent picture of this pontificate.
TOPICS: Apologetics; Catholic; Worship
KEYWORDS: benedictxvi; collegiality; francischurch; liturgy
1 posted on 04/22/2018 4:08:06 PM PDT by ebb tide
[ Post Reply | Private Reply | View Replies]