A new study released on Monday by the Penn Wharton Budget Model (PWBM) argues that this is a good thing.

According to The Hill:

“At the end of the day, they actually decrease debt because they do have significant revenue raisers,” Richard Prisinzano, director of policy analysis for PWBM, said in an interview with The Hill. “And the economy is more productive. As we put in things like education and infrastructure, workers become more productive, and that gives a boost to the economy.”

If the U.S Treasury had one dollar for every dollar we spent that was promised to increase productivity but was just, you know, spent, then the Treasury would be sitting on a $26 trillion surplus instead of a $26 trillion deficit.

What Team Biden and the PWBM conveniently ignore is that our nation’s decades-long history of annual increases for per-federal spending on education per pupil has actually had zero impact on student test scores. 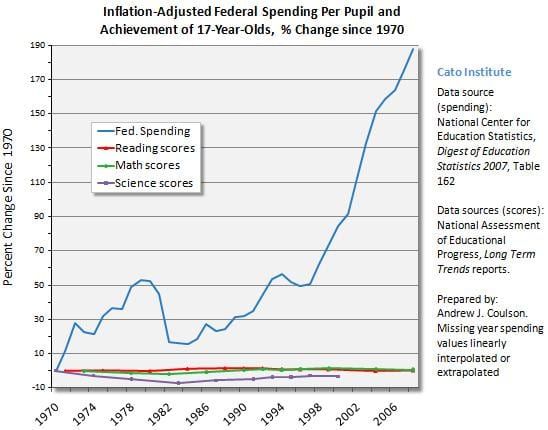 WHAT YOU SEE IN CALIFORNIA, YOU WILL SEE IMPLEMENTED IN THE ENTIRE USA ( Under a (ahem) Kamala Harris Administration ) :

A hypothetical Biden administration says it will devote more money to infrastructure (as President Donald Trump already has), but no doubt Biden’s spending would be in line with Green New Deal priorities he endorsed to win the hearts and minds of his party’s radical watermelon wing.

As a result, California’s once-fertile interior enjoys near-permanent drought conditions, the state’s highways are among the nation’s worst, and millions of residents can’t get enough electricity to run the A/C on the hottest days when they need it most.

Biden would bring California’s mislaid priorities to the nation at large.

Yes, but we blew the spending argument by spending trillions.

Government will collapse if Biden is elected with the Senate.

The bottom line for Americans are these things:

Talk about taxes and spending are increasingly falling on deaf ears. The Federal tax code is way too complicated for most people to understand, and government has been increasing spending for well over a century with no Armageddon. People may wince more at the idea of being taxed, but Americans of all stripes love hand-outs (whether they admit it or not).

Kamala will be the REAL President. Bernie Sanders and his acolyte AOC and the other members of the Squad will be calling the shots behind the scenes.

and she's one nasty human being, which is why she is kept hidden along with slo joe.

Joe isn’t going to do anything...even if he “wins”. He would be immediately pushed aside and Harris will do whatever her handlers tell her to do.