Rep. Jerry Nadler (D., N.Y.) said on Sunday that Antifa riots in Portland are a "myth."

"That’s a myth that’s being spread only in Washington, D.C.," Nadler said after being asked if he disavowed violence in Portland.

Nadler's comments contradict numerous news reports on the protesters—many of whom identify themselves as members of Antifa. Protests have continued in Portland for nearly 60 nights in a row, mainly targeting Hatfield Federal Courthouse and local police stations.

The Portland Police Department officially declared the protests a riot Sunday after approximately 5,000 to 6,000 protesters surrounded the courthouse and began shooting fireworks at the building. Last weekend, rioters barricaded federal officers in the courthouse and launched fireworks at the building. President Donald Trump deployed the officers to Portland earlier this summer to curb violence in the city sparked by the death of George Floyd in late May.

Antifa has a history of involvement in violent protests. In 2017, members caused nearly $100,000 worth of damage to the University of California, Berkeley campus after protesting Milo Yiannopoulos, a controversial right-wing speaker. In 2019, the group counter-protested a "No Marxism in America" group at UC Berkeley, attacking the protesters and police with smoke bombs. 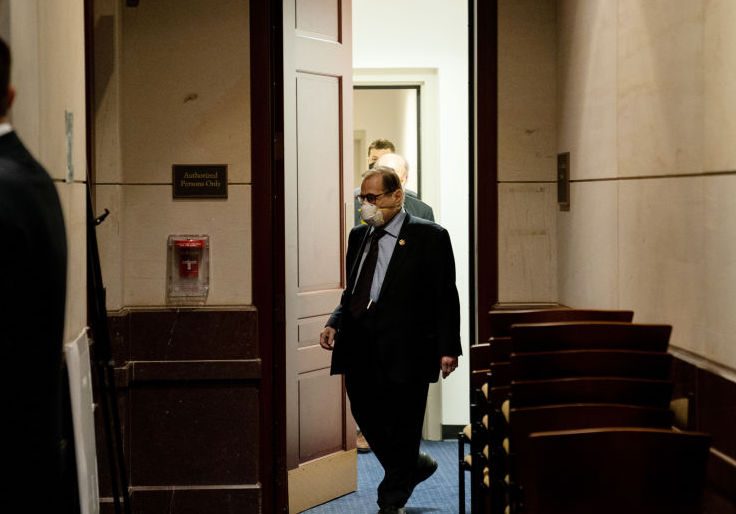 If the so-called “news” media was as eager in covering the anarchist riots in Portland as it was in covering the “Arab Spring” riots in Cairo, he wouldn’t try to get away with that whopper.

I guess he thinks the anti-semitism inherent in antifa and blm is a myth too.

How does he not go blind keeping his eyes so tightly shut?

He’s such a putz. No offense to putzes.

I ran into Jerry Nadler in DC and asked him to disavow the Antifa violence/rioting in Portland.

This guy proves time and time again that he’s a steaming pile of dog shit, and should be near first against the wall.

Portland Riots > not a myth

Seattle Riots > not a myth

Nadler has a brain > myth

When a dog craps on the rug, you should rub his nose in it. Nads laid a mammoth crap on the sidewalk. He should be given special treatment . . .

I dare Porky to go to Portland personally to show us how peaceful they are.

Fortunately there is conservative talk radio, print and electronic venues to demonstrate what a lying (pick the word) this phony is

IF you are correct, “The Waddler” is the biggest pile that I’ve yet seen. - I always figured that he was more ELEPHANT poop.

To me, he looks like a HOG, wearing clothes.
(Our family was a “major player” in swine production for > 300 years, so I know a good bit about FAT HOGS.)

What a disgusting, pathetic excuse for a man who goes through life clueless ar what a pathetic loser he is.

I guess Fat, Drunk and Stupid is a way to go through life.

when the FakeNewsMSM is complicit in the rioting, what do you expect.

here’s taxpayer-funded ABC Australia promoting one of their flagship current affairs TV programs which will air in a few hours. you can bet the Boogaloo guy will be wearing a mask:

AUDIO: 3m6s: ABC Australia: AM: Protesters bring firearms to US rallies as tensions ramp up
By David Lipson
In the United States, the deployment of federal agents in army fatigues to confront protesters appears to have further ramped up tensions.
There was more violence and destruction over the weekend.
And now there’s a worrying trend emerging: protesters bringing guns to their rallies.
Protesters
Phil Robinson, founding member, Michigan Liberty Militia
Paul Birdsong, counter-protest leader
The Boogaloo Bois, anti-Government libertarians
https://www.abc.net.au/radio/adelaide/programs/am/protesters-bring-firearms-to-us-rallies-as-tensions-ramp-up/12497808


video not up til it airs:

Updated 27 Jul: ABC Australia: Foreign Correspondent: Life and Liberty
On 4th July, a small town in Pennsylvania gathers to watch fireworks celebrating its country’s independence, hard won in a war fought 250 years ago.
Today parts of America feel like they’re at war again, as this powerful country battles disease and division under its polarising and unpredictable President.

As the nation gears up for the presidential election, the ABC’s US Bureau Chief David Lipson takes us on a road trip through the northeast swing states to talk to ordinary people about the coming contest.
Trump’s re-election looked like a certainty before the pandemic. Now, with the economy buckling under more lockdowns, COVID cases rising and civil unrest running in the streets, his grip on power looks more tenuous.
As fringe groups arm themselves for conflict, will this fractured country survive the ultimate democratic stress-test?

David meets Phil from the Michigan Liberty Militia who’s angry about his state’s lockdown orders describing them as ‘a stomp on our constitutional rights’. In protest, they took control of the State parliament in April. Now Phil warns a Trump defeat could get ugly.
‘There’s a lot people out there that would not be able to handle that… there is people… that just think Trump is…like a God.”
‘Bikers for Trump’ member Londa has kept her faith in Trump and is banking on him to deliver the prosperity America used to enjoy.
‘He doesn’t care what anybody thinks. He’s doing what’s best for the country.’

In middle-class Ohio, a professional soccer mum with six children says she’s changed her mind about Trump because he’s ‘unkind’.
‘It’s just not the way that I would want my kids to be treating anybody”.

In Detroit, once the engine of America’s car industry, Dave meets African American woman Desha. She watched her husband die a painful death from COVID-19 and is now urging African Americans to come out and vote on election day.
“Gotta do it. Like we have to, you have to, it is so much more important, you know, now than ever before.”
https://www.abc.net.au/foreign/life/12490494