"You don't want 600 people to come here and destroy your business and burn it down."

Black Lives Matter organizer Devonere Armani Johnson had a simple and straightforward message of racial justice for Madison store owners of all races.

"Give me money or we'll break windows," the repeat offender had allegedly told them.

The “Free Yeshua” Madison riots began when the police arrested the BLM thug.

Johnson, who also goes by Yeshua Musa or Jesus Moses, was busted after following an older white man into Coopers Tavern while shouting, “you’re a racist” at him through a megaphone, before lecturing the patrons on his opinion that, “Jesus was not a white man.”

"His name was Horace," Devorene/Yeshua asserted, "and he was plagiarized from ancient Egypt." He explained that Jesus had been sent by Queen Elizabeth to bring slaves to America.

It’s possible that he was referring to Horus.

Before that, Devorene had threatened a mother of four who had been walking down the street with her children, calling her a "fat b___" and yelling, “don’t think your god’s going to save you”.

"My name is Joshua Musa, and I am f____ disturbing the s___ out of this restaurant. I got a f____ bat,” raved the thug that WORT community radio had described as “a frequent organizer and participant in Madison’s Black Lives Matter demonstrations against systemic injustice.”

Meanwhile the man he had been harassing was doing the right thing that had gotten any number of white people labeled 'Karens' and fired from their jobs, calling the police.

The police arrived and Devorene resisted arrest, before screaming, “I can’t breathe.”

“Mandela Barnes is a friend of mine, and this is how I get treated? I had no idea. This is the first time I’ve ever been assaulted,” Carpenter whined afterward to the racist BLM mob.

Since then a more belated form of justice arrived when the Feds busted Devorene for allegedly blackmailing businesses into giving him free food, drinks, and money.

The feds say that Devorene threatened to "shut down and destroy" an eatery if he and his friends didn't get free food and drinks. He barged into a restaurant with a boombox and when the owner told him that he had already given to Black Lives Matter, the social justice warrior told him that wasn’t good enough. "Give me money or we'll break windows."

Devorene went to a bar and warned, "You don't want 600 people to come here and destroy your business and burn it down."

And if the owner wanted to bring in that instrument of white supremacy known as the police, the BLM organizer taunted, "You notice that when you call them, nothing happens to us."

Devorene has a long history of knowing that nothing happens when you call the police.

6 years ago, Devonere allegedly got into a fight on a bus with L.G., apparently also known as Low'end Savage, who was the father of the child of the woman whom Devorene was dating.

According to the police, the encounter didn't go well. Low'end put Devorene in a headlock. A witness heard Devorene say, "Let go, I'm going to shoot."

A shot rang out and Low'end was left paralyzed from the neck down.

Devorene bought a bus ticket and ran away to Chicago where he would fit in really well. When he was brought to trial, a jury found him not guilty of felony first-degree assault.

Devorene rebranded as Yeshua Musa. The media described him as being active in the Black Lives Matter protests. A photo shows him near the Lady Forward statue that would be toppled after his arrest. holding up a sign of a police officer, a pig and a klansman, asking, “spot the difference”, and declaring, “no justice, no peace, no racist police” and “BLM”.

“We didn’t divide us by calling each other black and white,” he ranted at one of the protests. “It wasn’t black people who did that, so it’s not up to black people to fix that. If you want us to fix it, we gonna burn everything down out of emotion, out of pain.”

Meanwhile, Devorene was allegedly asking a business to send money to his Venmo account or get its windows broken. But he was no doubt blackmailing stores out of emotion and pain.

Local business owners reported that Devorene would regularly visit their stores, blast music, call them racist, threaten to burn down their stores, and demand free food.

Even after his arrest, Devorene didn't have much to worry about. District Attorney Ismael Ozanne was a leftist activist, from a career leftist family, who got started with the pro-crime Innocent Project. And his big focus has been hate crimes and pushing implicit bias training.

When Devorene and Black Lives Matter racists blocked off traffic and demanded to speak with Madison's police chief, Acting Chief Vic Wahl showed up and gave the racist organizer his card.

"I am absolutely, fully, on board with meeting with you, meeting with him, to talk about ways we can improve, build trust and move forward," Wahl told him.

Despite the denials by Mayor Satya Rhodes-Conway, there were signs that the police had been told not to interfere with the Devorene riots. At a press conference, Mayor Rhodes-Conway indicated that she had asked the courts to expedite and quickly resolve Devorene’s case.

Fortunately, the Feds have stepped in with a little law and order and hit Devorene with extortion charges with a maximum of 20 years in prison.

The media had romanticised Devorene as a social justice activist. The Madison State Journal had run a photo of him and his son trying to register voters. “We are demanding justice, reparations, police reform,” the publication had quoted Devorene as saying.

It didn’t ask if the boy was really the son of the man he had allegedly left paralyzed for life.

Nor did it inquire about the time Devorene had retweeted a claim that white people "are the real monkeys" and have "Neanderthal in their dna".

Black Lives Matter racists never get held accountable for their hate or their violence. But maybe in Madison, of all places, that’s beginning to change.

Or as the Badger Herald put it, “Am I next?’ Activist’s message continues after his arrest.”

Just not the way that the Herald meant it.

Devorene’s alleged message was, “Give me money or we'll break windows”. But, by stepping in and throwing the book at him, the message of the Feds to the beleaguered store owners of the area is that finally someone is getting up off their knees and standing up for them.

Law and order is not, as Devorene and the Democrats tell us, a racist conspiracy. It’s how the weak and the law-abiding are protected from thugs who would rob them of all that they have.

Devorene had two weapons, one weak, a bat, and the other, more potent, the media.

Everyone was afraid of Devorene, not because of his bat or his antics, but because the Black Lives Matter phrase has taken on a terrible totemic power to which everyone must kneel.

Two anonymous business owners spoke up to the Feds who threw the book at Devorene.

The only way to stop the terror is to stand up to those who want you to be afraid, who demand that you kneel, and chant their hateful slogan, and then give them everything you have.

And so the ballad of Devorene Armani Johnson, aka Yeshua Musa, a Black Lives Matter organizer who inspired a riot that terrorized Madison, ends with two little words.

They’re words that inspire hatred, outrage and violent rage from the mobs and their allies.

Those two words are the difference between peace and terror, between life and death, and between civilization and savagery. They are the words that make cities and communities possible. Madison’s radical leaders had jettisoned the police and turned over the streets to thugs like Devorene who, under the guise of social justice, is accused of acting like a bandit.

To get on or off the Greenfield ping list please FReepmail me.

I am posting Greenfield's articles from FrontPage and the Sultan Knish blog. FReepmail to get on or off the Greenfield ping list.

FrontPage is a basic resource for conservative thought. Lou

this is what decades of the welfare state logically gives you

Just a matter of time before the Marxist BLM leadership orders the seizing of properties like Mike Bloomberg’s Hamptons $20,000,000 estate on the ocean in the name of the people . Then bus in urban vacationers. What would the oh so politically correct, apologetic Bloomberg do? 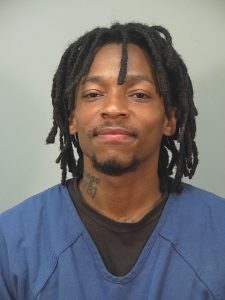 He needs to be breaking rocks on a road gang.

But for the law abiding, don’t even think about not wearing a mask when ordered to.

I can’t wait for his rap album!

I hope he uses the megaphone!

He can rap about Federal Prison.

Hopefully for 40-60 years. That seems about right.

[and yelling, “don’t think your God’s going to save you”]

But then He’s got something special for you which you won’t avoid with that attitude.

What’s the big deal? Those two money grubbing whores jesse carjackson and al pimpton have been running this scam all their useless lives.

It’s a Great Society isn’t it..

it isn’t great and it isn’t society :)

He needs to be listening to WC dead White Man classical music.

A street-sweeper full of #4 buckshot.

Before that, most states ruled students had to register to vote where they came from.

Madison started recruiting black residents. Lost of them came from Milwaukee, most of the really violent ones came from Chicago.

Now, it is "systemic racism", a phrase which cannot be disproved or shown with data.