Witnesses Said Police Officers Shot Unarmed Man In The Back. Then Cops Released The Video
Breaking 911 ^ | 06/29/2020

Two San Diego Police Department officers have been placed on paid leave after they shot and wounded a robbery suspect who pointed a gun at one of the officers during a confrontation in downtown Saturday night.

The suspect, Hurtado Ibarra, 25, of San Diego, suffered life-threatening injuries. He was hospitalized in an intensive care unit.

The incident remains under investigation by the District Attorney’s Office.

As for the witnesses, FILTHY LIARS!

This is the other half of the reason all cops should be required to wear body cams and activate them for all interactions with the public - protects the public, and protects the cops.

Kevin, don’t you think that with Joe Biden’s intensive officer training course, these officers could have simply “shot him in the leg?”

With a shotgun, right? 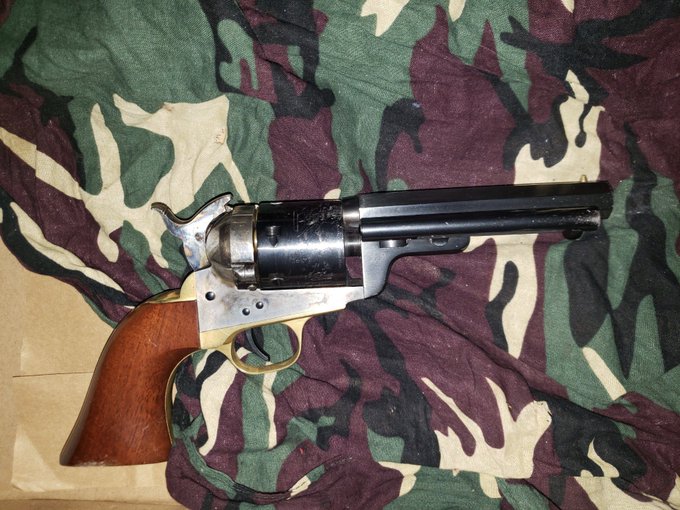 Doubtless a product of our friends at Uberti. Too clean for an original.

The building and street lamp cameras provide corroborating information as well. The suspect reached for his waistband as soon as he looked over his shoulder and saw the cop approaching on the sidewalk.

Everyone of the “witnesses” providing materially false information should be charged.

This is what we’re all up against. A crime spree that must be stopped and lying sacks of shit for so-called witnesses. We must win this or all our lives are in jeopardy. Is your family and your lives worth fighting this? Don’t kid yourselves, it’s coming to your town if we don’t stop it starting right now.

That revolver almost looks like it could be black powder, which makes sense because in some states you can buy them online with no background check.

That’s all you need!

This is what we’re all up against. A crime spree that must be stopped and lying sacks of shit for so-called witnesses. We must win this or all our lives are in jeopardy. Is your family and your lives worth fighting this? Don’t kid yourselves, it’s coming to your town if we don’t stop it starting right now.
/
/

Totally agree. Good cops have nothing to fear from everything being on video. Bad cops shouldn’t be cops. And start charging people for making up stories directly contradicted by bodycam evidence.

They couldn’t shoot him in the leg?

14 posted on 06/29/2020 10:57:11 PM PDT by Vendome (I've Gotta Be Me https://youtu.be/wH-pk2vZG2M)
[ Post Reply | Private Reply | To 1 | View Replies]
To: Kevin in California
There is an amazing video floating around somewhere on YouTube (sorry, I don’t remember the title) that shows a number of videos posted by black people, in which they emotionally tell the world their tales of woe suffered at the hands of evil, racist police officers. Then the video follows by showing the police bodycam footage of the same interactions, and low and behold every single one of them was lying their butts off. But they certainly put on a good show for their online followers, sometimes including tears.

I have yet to see a black person discriminated against in my personal life, but I’ve seen tons of hoaxes, three of which I observed myself. In each of those three instances (all of which occurred in the context of employment) I knew all of the people involved, on both sides of the claims. And in every case the pattern was the same: The black employee got in trouble for something they had done wrong, and decided to use their race as a shield against accountability by filing a completely meritless, false discrimination claim. None of them succeeded, fortunately, but these incidents clearly proved how bestowing any group of people with a victim identity, and implementing policies and laws that provide them with a powerful political weapon, will naturally lead to them using that weapon to avoid consequences for their own actions. Also, presuming that alleged victims must be telling the truth simply because they belong to an “approved” protected class virtually guarantees they will lie if necessary to get what they want, or to deflect accountability when they screw up.

What little actual racism may be occurring out there, it is far outweighed by the constant stream of false discrimination and harassment claims. Take the race card away, and actually require black “victims” to prove their claims, and I bet the nonsense about “systemic racism” would fade away as these people suddenly had to put up or shut up. They know they can’t provide much if any evidence of real racism, which is why they invented this notion of hidden, systemic racism that was hidden and couldn’t be seen.

Oh i’m so intimidated u posted a picture of a firearm!!!.. i think i’ll call the police and sue you! Somebody help me!!! shut down FR!!!

“Don’t kid yourselves, it’s coming to your town if we don’t stop it starting right now.”

Or better yet shoot the gun from his hand.