Top U.S. intelligence officials released statements Monday criticizing leaks to the media as the Trump administration continues to defend against allegations that it knew Russia had offered bounties to incentivize Taliban-linked militants to kill coalition troops in Afghanistan.

“The selective leaking of any classified information disrupts the vital interagency work to collect, assess, and mitigate threats and places our forces at risk. It also, simply put, a crime,” Ratcliffe said in a statement.

Neither official directly addressed the reported intelligence assessing Russia had offered bounties to militants to kill U.S. troops in Afghanistan.

“We are still investigating the alleged intelligence referenced in recent media reporting and we will brief the President and Congressional leaders at the appropriate time,” Ratcliffe said.

“Hostile states’ use of proxies in war zones to inflict damage on U.S. interests and troops is a constant, longstanding concern. CIA will continue to pursue every lead; analyze the information we collect with critical, objective eyes; and brief reliable intelligence to protect U.S. forces deployed around the world,” Haspel said. 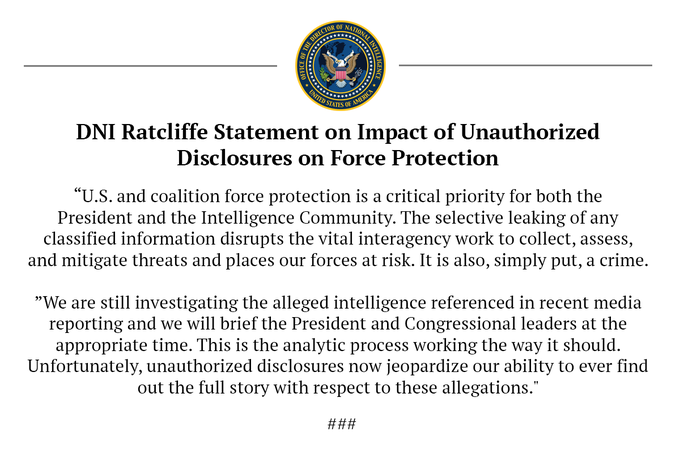 Why make the assumption that this is even a leak, as opposed to something completely invented like the rest of the New York Slimes and Washington .comPost?

My second take after hearing Pelosi was....Why is she announcing a security matter in Public?

Instead of “slamming” start prosecuting. How hard is it for the NSA to track calls to NYT reporters? The leak is a felony. Getting a warrant shouldn’t be too hard.

why does the NSA just admit:

NSA gives up as pussies, as America DIES.

There is only one reason to leak that kind of intel: trying to cause harm to Trump.

they pay so they know.