Maybe … but was it a “hate crime”? The FBI says no, even though the garage-door pull in the stall assigned to Bubba Wallace at Talladega does look like a noose in the pictures shown on CNN. However, the news that it has been there at least since last year — long before anyone knew Wallace would draw that stall — led the FBI to conclude that there was no ill intent.

Wallace won’t let it go, however. CNN’s Don Lemon told the NASCAR racer that he’s “handled this like a champ,” but a champ might know when to walk away from a wreck. Especially when it turns out he never saw the noose in the first place, but instead got told of the “hate crime” from NASCAR:

WALLACE: But my side needs to be heard. I don’t know what time it was about 5.30, 6 o’clock on Sunday evening after the race has been called, garages are closed. Crews, my crew was on a plane back to North Carolina. We were — I was about to go out to dinner with a couple fellow competitors. And we were talking about what time we’re going to leave and where we’re going.

And I get a phone call from (Inaudible) I get a phone call from the president Steve Phelps. And it’s a phone call, Don, that I’ll never forget. It’s one of those phone calls where you can automatically tell within the first couple seconds that something is wrong. And it immediately made me think of, what did I do? What am I getting suspended for, like, what did I say wrong in an interview? Whatever it was. And so, I’m thinking all the bad things or whatever it could have been that I had done. Whatever I said.

So, he’s like we need to talk in person. So, I’m OK. So, he walks down on motor home and opens up the door. And the look that he had on his face alerted me in a way that I’ll never forget as well. And I’m still thinking like, OK, what did I do, let me know.

Now mind you I got to the racetrack — I don’t remember what time, 9.30, 10 o’clock and slept all day. Just because that’s what we were able to do. Go straight to my motor home. That’s the only place where I’m allowed to go. I’m not allowed to be in the garage. But the conversation that I had with Steve Phelps was I would say I’m speaking for him — I would probably say one of the hardest things, if not the hardest thing he’s ever had to tell somebody. Tears rolling down his face. Choked up on every word that he was trying to say that the evidence that he brought to me that a “hate crime was committed,” quote on quote. And I immediately thought my family was in danger. And so, I was about ready to call my mom and dad and to make sure everybody was OK. But it was in the garage stall and the car was at. And so, I was kind of like taken back and not really comprehending everything. I was just like, what?

But the way that I was communicating, Steve was communicating to me that everything was going on, it was, it showed that the testament to him and the character that he has and how he’s representing the sport. How he wants to stand up for what’s right. He’s not going to tolerate any racist acts or anything.

And I stand behind Steve. I stand behind NASCAR. And like they said in their statements if it happened again, it wouldn’t change anything. They would do it over again.

WALLACE: But I never seen the noose. I never reported it. Like I said, I was going to dinner.

Fair enough; Wallace got told by NASCAR that it was a hate crime, and he had a completely normal reaction. Wallace got emotionally invested in it, and that’s totally understandable. However, the FBI has firmly established that the rope has been around for at least a year with that knot and had no relation to his stall assignment, which means it wasn’t aimed at Wallace. Having learned that, Wallace might have tried to unwind.

Not so much, as it turns out:

LEMON: Have you seen ropes like that hanging from garages? Is that typical?

WALLACE: Don, the image that I have and I have seen of what was hanging in my garage is not a garage pull. I have been racing all my life. We have raced at hundreds of garages. That never had garage pulls like that. So, people that want to call it a garage pull and put out all the videos and photos of knots being in as their evidence. Go ahead. But from the evidence that we have, that I have. It’s a straight up noose.

It seems pretty clearly a noose in the picture too, but a noose is — political freight aside — just another kind of knot. People use knots for purposes other than hate crimes. (For instance, suicides, although there are likely other purposes too.) If someone took their time tying that rope in that fashion, perhaps they meant it out of general racial animus, but that seems like a weird way to express it. Who else would ever see it other than racers and their crews, and who would know what the intention of it was? There are very few drivers of color on the NASCAR circuit, and Wallace is the only full-time black driver. If it was meant as a message of intimidation, it wasn’t terribly well thought out. The FBI’s 15 agents on this case concluded that this wasn’t a hate crime at all, but just a pull rope, which seems like a pretty fair conclusion to reach. As Sigmund Freud once purportedly said, sometimes a cigar is … just a cigar.

NASCAR did Wallace and its fans a disservice by blasting this out in public before the investigation had begun. NASCAR wound up with egg on their faces, which is most certainly not Wallace’s fault, but perhaps that is where Wallace should direct his ire.

Update: I meant to write “before the investigation had begun,” not “without an explanation.” I changed it in the last paragraph after the post went live.

Someone posted a photo of the two, and I assumed it was a photoshop job. Apparently, not so.

Just another example of the victim mentality !

I’ll tell you what Bubba is...

If you go one Don Lemon, your are a lying hustler.
Just killed what little credibility you had kid.

Don’t bother me with the facts...

I don’t care what his college SATs say, he’s still an idiot.

From what I’ve heard, it might be a noose for a cat.

He sounds more and more ridiculous and triggered

Ah, he’s got the infamous ‘blank” race card, which allows the user to say anything at any time and “it’s twue, it’s twue”!

Could not find a picture of this specific ‘noose’. Does anyone have one?

I don’t care that I am one of the worst drivers, I want respect, I’m smaat.

Bubba was on Dan Patrick and said “it was a non-functioning noose”.

So it was a looped knot. 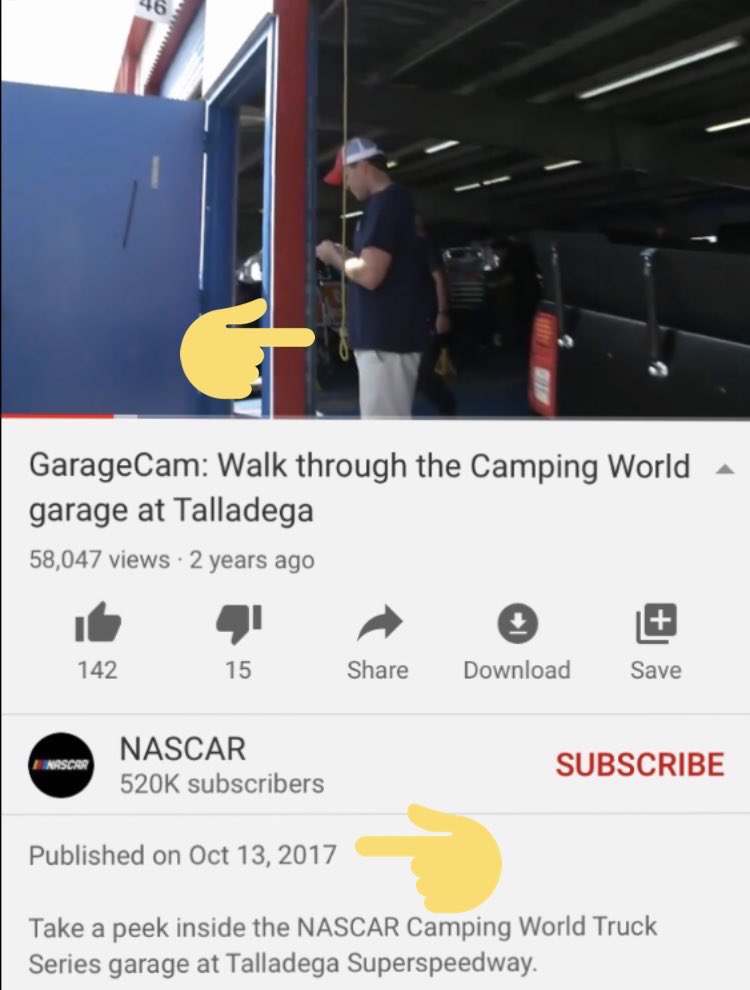 And just how well you gonna do out on the track you crying little..

I’d run your ass right into the wall the first chance I got if you keep it up.