"... In service with the Navy and Marine Corps since 1983, the flexible design has gone through a Porsche 911-like evolution.

Two type series of the original Hornet, the A/B and C/D preceded the Boeing F/A-18E/F Super Hornet, a larger more capable version of the F/A-18 introduced in 1999. Since then the Super Hornet has been updated with “Block II” models and now there’s a “Block III” Super Hornet....

“The advanced cockpit system (ACS) takes the legacy displays of the Block II and puts them all into one big touchscreen piece of glass that’s almost like an iPad interface for the pilot,” Tebo explains.”

Video Games for Naval Aviators who will have some very real ‘skin’ in the game.

Gotta say...that is a fine looking place. The dual seat version canopy reminds me a bit of the Tomcat...

How I miss the Tomcat!

A 9000 hour airframe? Worth knowing more about it.

And to think that the FA-18 was almost a throwaway because of the F-15!

I wonder what can be done to upgrade the Block II aircraft with at least some Block III upgrades. Australia has 24 Block II F Super Hornets and 12 EA-18G’s.

The DTP-N and TTNT tech sounds interesting, especially with the Loyal Wingman UCAV’s under development here in Australia.

A far cry from the CRTs in the F-4. Heads-up display looks like it does more than just the gunsight..and they still have the whiskey compass.

I’d like to hear from a pilot on this one.

From the Forbes article:

Tebo: Boeing director of development for F/A-18 and EA-18G programs

The Block III upgrades are good. The limiting factor from the beginning to this day for all F/A-18 models is effective combat radius. The Navy forfeited the medium range attack mission when it cancelled the A/X program and retired the A-6. The F-14 “Bombcat” was a stopgap measure, and the aircraft proved to be a stable & reasonably capable bomber with good legs. Maintenance man hours per flight hour for the F-14 was off the charts, though, particularly as the airframe aged.

The range and lethality of the bad guys’ surface-to-surface and air-to-surface missile systems I’m guessing are causing the carrier expeditionary groups to stand farther out to sea, making it even more difficult for the air wing to project power inland and for sea control.

The Navy will have to decide if it wants to reclaim the medium range attack mission. If they do, my guess is it may be in the form of an unmanned platform.

Yes, and sharks with frickin’ laser beams as sub hunters. 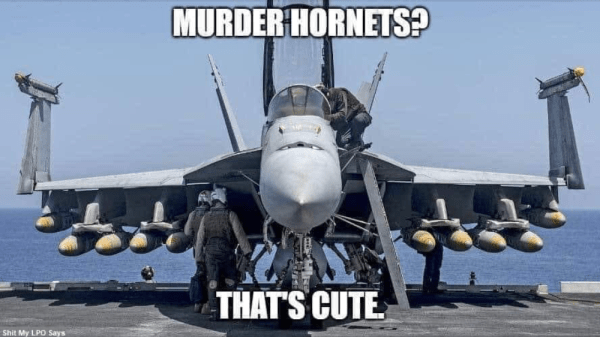 F14 - one bad ass jet!!
I dated an A6 pilot long time ago. He was one of the pilots who bombed Kadafi’s (sp?) compound. He said seeing f14s flying cover was a beautiful sight.
High speed pass over the carrier to celebrate. He absolutely loved it!

I grew up as an aviation nut and still am, and when I had gone in the Navy, being able to see them flying all the time, close up and personal...well...they were simply the epitome of a modern jet fighter.

Gorgeous lines...just a pleasure to see.

I almost got fried by one once as I got caught behind a jet blast deflector on the flight deck. I didn’t see the warnings to clear out as I was inspecting the plane right behind the Tomcat as it went to full afterburner (IIRC, they used to wave everyone away from behind there in those cases, but...I didn’t see it.

Next thing I know, the temperature starts to rise, and I realized what was going on. At that point, it is too late to run out from behind the JBD because you would not only probably get fried, you would probably get bounced down the flight deck for your trouble, so I got up in the wheel well of the plane I was inspecting, and the temperature kept going up to the point I was having a hard time breathing...I had pulled my vest over my face with tightly shut eyes, shoved my face up into a corner of the wheel well and gasped for breath.

I NEVER made that mistake again! But seeing a Tomcat launch at night in full afterburner...well, what boy in every man wouldn’t like that???

They used to do supersonic fly-bys on the ship at sea, and it is an unworldly thing to see, in my opinion. they would do them low, close aboard, at flight deck level...and it was eerie.

You would see them a speck, approaching faster than anything you have ever seen in your entire life move, and...no noise. Nothing. Just this...thing. And you see white flashes...compression waves on the plane condensing moisture instantaneously making it visible for a split second. On and off. Then, faster than you can imagine, it is even with you and passes in the blink of an eye...in total silence. As if it were an alien spaceship.

Then the world explodes a second later in sound...the explosion of the sonic boom at close range...the roar of the engines mixed in...

There’s a few ladies who like fighter jets noise & flames!!
Sometimes they’ll be a flyover for an LSU football game. Usually f16s or f18 out of NOLA air station.
I live a mile from campus with clear view of stadium. I would see “mosquitoes” approaching & was amazed how very fast & silent they were. Low & fast as they were allowed.
You’re right you don’t hear anything til they’re past you & the sky gets very noisy!
I cannot imagine what that must look/feel like in battle.

It has been my experience that men are often attracted to women who enjoy those things as well...:)