To: a fool in paradise; All
Manhattan DA Cyrus Vance, Jr. has done the same thing.

He says he will NOT prosecute protest related arrests "in the interest of justice".

However, he chose not to extend this same courtesy to those New Yorkers protesting the indefinite lockdown of their businesses because of the virus. 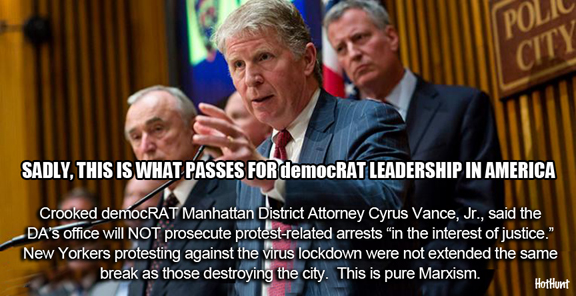 I called Cuomo's office yesterday and left a nasty message on their voice mail. It's the first time they've been taking any calls since the lockdown started. I said: "Manhattan D.A. Cyrus Vance, Jr. releases all the rioters without charges, and you think it's the NYPD, and all police agencies that needs reforming?" I also told him that he and his father destroyed New York State. I also called my Republican State Assemblyman and left a voicemail, but he's outnumbered as the Rats control both the Assembly and Senate.

I would think that such a glaring double standard would not pass a supreme court judicial review.

Best to raise the cases now to forever stop them from this severe overreach again.