Reports and rumors that groups bent on rioting and violence in Coeur d’Alene brought out men and women with guns on Monday determined to stop them if they arrive.

Dan Carson was patrolling Sherman Avenue with an AR-12 automatic 12-gauge across his chest, an AR-15 strapped to his back, two 9mm handguns holstered and a .38 special, too.

“I heard there are some people on the way who shouldn’t be here,” he said early Monday evening.

Those people, he said, were Antifa and Proud Boys, militant far-left and far-right groups.

Carson said he was in Spokane Sunday night helping protect business there. He said he supports the right to protest and is also upset about the death of George Floyd.

“By all means. I’m on their side. I disagree with what happened,” he said. “What I don’t agree with is when you turn to violence, and you start rioting and destroying businesses and hurting people who have nothing to do with anything.

“That’s what I’m here to hopefully prevent,” he said, adding, “I’m not going to be alone. There’s a lot more on the way.”

He was right. Soon, more armed men, self-described as a loosely formed group of patriots, arrived. They took up posts at corners on both sides of Sherman Avenue.

Later, they were joined by hundreds of citizens packing rifles, semi-automatic weapons, handguns, and bows and arrows. The sidewalks were packed with people walking up and down Sherman Avenue, firearms proudly displayed for all to see. They carried guns, had them holstered around their hips and had them strapped across their backs. 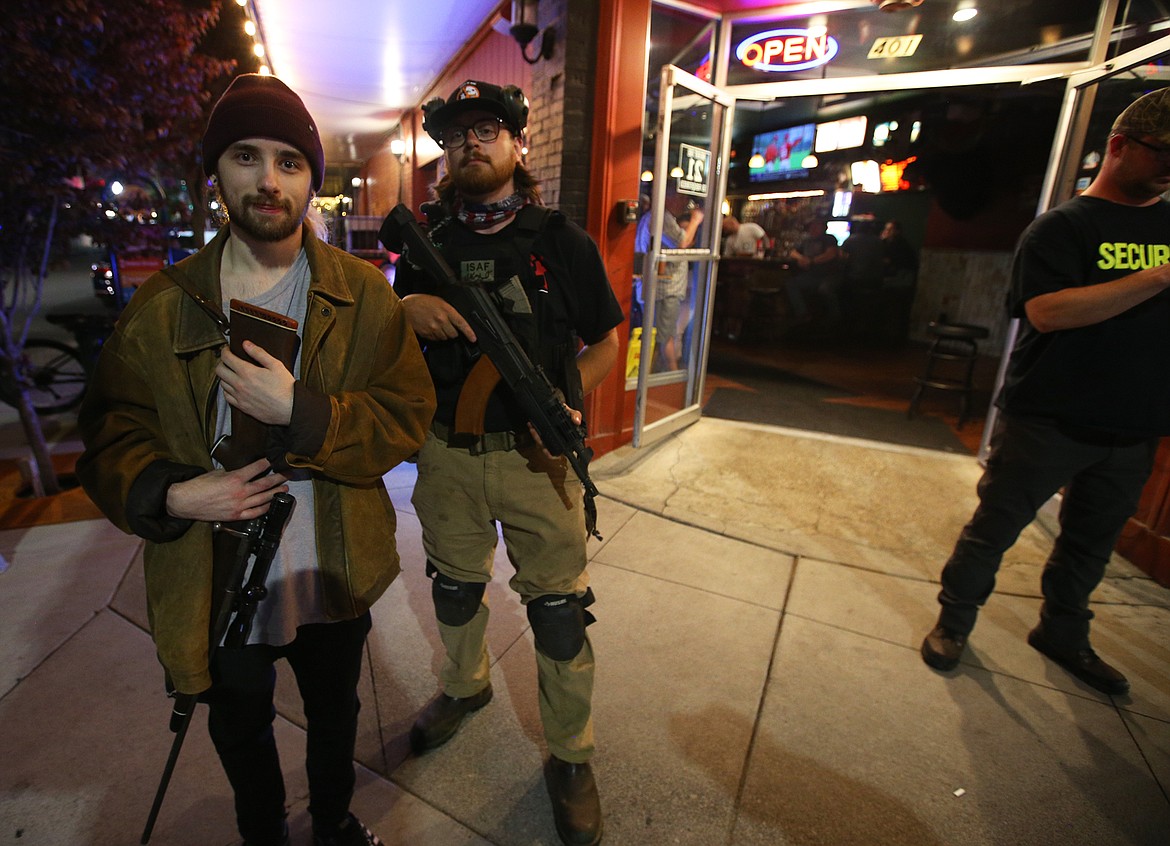 Men with semi-automatic weapons, handguns say they are here to protect city amid reports of militants heading this way

These guys have somehow gotten tips that the thugs and commies are coming into Coeur d'Alene from Spokane 35 miles to the west.

...continue the important parts of the excerpt a bit beyond 300 words...

Earlier, in the WinCo parking lot, a group of about 40 men and women, some carrying semi-automatic weapons and handguns, stood watch due to what they said were threats of left-wing militant groups coming to start riots at the store.

“We came here as a show of force and as a deterrent to prevent that from happening,” said Trevor Treller, who had an AR-15 and a Glock 19 handgun. “Nobody here wants a confrontation and everyone here is wiling to engage in one if it ever should it come to that, or need to be. But nobody wants it and everyone prays it will never happen.”

Treller said they had been there for a few hours and nothing much had happened, expect some people “clad head to toe in black” drove by and shouted obscenities at them. “They left. It’s quite possible they left because we’re here,” he said.

Like Carson, Treller said he had heard reports, verified by people in positions who would know, that people with Antifa were being bussed in “for the purposes of causing trouble and rioting.” He noted that Spokane, where there were riots and looting late Sunday, is only 35 miles away. “It’s not inconceivable that some very foolhardy, idiotic people in Spokane who are of a mind to commit violence would think they could get away with trying it here,” Treller said. “We’re here to tell them different.”

...a man who said his name was Rescue said he was there to make sure “everybody has a chance to speak their mind but not get out of control.” Rescue carried an AR-15 and two .40-caliber handguns. He said he and his counterparts were prepared if trouble came to Coeur d’Alene. “We have people all over town. The rumors are, they’re going to be in numerous places and they had a scout in here earlier counting our numbers and reporting to somebody.”

Brett Surplus of Coeur d’Alene, a former police officer, said he was there to defend people’s businesses and protect people’s right to free speech. He said a show of force by armed citizens may prevent problems. “We sit back long enough and see America not help their blue line because of the fear factor or they’re not armed,” he said. “This is where the end of the line stops in this state.”

“I want to protect our way of life,” he said.

Should be done everywhere it’s legal to do so.

Idaho has been one of the most popular States for survivalists to move to for a long time. That James Wessley Rawles guy rated it #1.

Thanks for the link. We spend a lot of time down on Sherman Ave, McEuen Park, Tubbs Hill, Riverstone, and the Centennial Trail. This is fantastic to see!

Idaho is constitutional carry no permit needed to carry concealed.

Good for them. Although I always have to chuckle at the guys who are trying too hard to look “tacticool” with the knee pads and earmuffs.

Patriots in TX, recently did the same, to protect our beloved Alamo.

We bought a house there three years ago. Family is from that area going back to 1927. It is heavily armed, no doubt about it. Great people everywhere.

Our local school in Hayden had a false alarm of a shooter a year ago. When the alarm was broadcast, this type of turn-out happened on Hayden Avenue within minutes of the alert going out.

Knee pads are very helpful when getting into a covered fighting position on concrete and electronic hearing protection like the Howard Lights in photo are perfect for being able to continue to communicate during gunfire. Nothing really “tacticool” about it really. Just basic gear with practical purpose for effective modern carbine work.

This is exactly what is needed, everywhere this nonsense is happening. Freedom loving Americans, when allowed, can far better protect life and property, than any police force or national guard group.

I really wish Trump would call for this. Call on our citizens to defend their cities, go ahead and leave the police and national guard at home. We got this......if we are allowed without the thought of arrest hanging over us but not the looters.

Looks like a great community. About how many of these folks in the video are CA emigrants, I wonder?

And I wouldn’t discount those walking around without visible weapons, either.

They can never get it right.