Will Biden disavow his decades of support for China’s rise and follow Trump’s lead?

Communist China poses a greater threat to America and our interests abroad than any other nation in the world.

If it wasn’t clear prior to the spread of the Chinese coronavirus, resulting largely from the Chinese Communist Party’s Chernobyl-like response, the subsequent threats should crystallize this point. It has acted malevolently toward the U.S., our European and Anglosphere allies, Hong Kong, Taiwan, and India, and across the South China Sea.

Countering the CCP is essential to preserving American life, limb, and liberty. The public deserves to know what presumptive Democratic presidential nominee Joe Biden’s approach to China would be.

After all, this is a man who sat on the Senate Foreign Relations Committee for three decades. Biden ultimately chaired or served as its ranking member from 1997 on, during a career at the senior-most levels of government spanning almost the entirety of U.S.-China engagement. As a longtime senator and then vice president, Biden never once acted to scuttle the integrationist-accommodationist policy that has left America in such a perilous position.

This is to say nothing of the disturbing appearance of corruption surrounding Biden’s tenure as vice president, in which he managed the “China portfolio,” while his son Hunter contemporaneously entered into an apparent sweetheart Chinese investment deal.

Thus far in the 2020 presidential campaign, Biden has flippantly downplayed the threat from China, only to quickly walk back his comments when he faced backlash. He attacked the Trump administration for “xenophobia” in enacting a travel ban early in the coronavirus crisis, only later to backtrack on that too. Now, Biden is trying a new tack: Portray himself as tougher on China than Trump.

This assertion is belied by his historical rhetoric and action, in contrast with a Trump administration that explicitly rejected the status quo by way of its national security strategy. That strategy notes the flaws of a premise to which Biden has long subscribed — that “engagement with rivals and their inclusion in international institutions and global commerce would turn them into benign actors and trustworthy partners” — and the Trump administration has acted accordingly.

The former vice president must tell us whether his views and policy prescriptions have markedly changed, or if his presidency would represent a reversion to the status quo ante.

Here are 23 questions the press ought to ask him but almost certainly won’t:

1. Does Biden still believe, as he remarked during a 2011 speech, that “a rising China is a positive, positive development, not only for China but for America and the world writ large”?

2. Does Biden regret his support for granting permanent normal trade relations to China, setting it up for accession to the World Trade Organization that would supercharge its drive toward superpower status?

3. Does Biden believe the Obama administration’s responses, or lack thereof, to China’s rampant theft of intellectual property, militarization of the South China Sea, catastrophic hack of the Office of Personnel Management, and liquidation of Central Intelligence Agency assets were sufficient, and successfully checked China’s ambitions? If not, what would he have done differently? Did he propose such alternatives as vice president?

4. Does Biden disavow the Obama administration’s signing of a 2013 memorandum of understanding — following intense lobbying of the former vice president by Chinese leaders — granting Chinese companies continued access to U.S. capital markets, in spite of their unique noncompliance in skirting basic auditing and reporting requirements, resulting in numerous frauds?

5. Does the former vice president think it appropriate for former Obama administration national security officials to lobby on behalf of Huawei, the CCP-tied, national security-threatening, alleged U.S.-lawbreaking linchpin of China’s plan for control over global communications?

6. Will Biden disclose any and all funding directly or indirectly emanating from Chinese sources for the Penn Biden Center for Diplomacy and Global Engagement?

7. Would a President-Elect Biden take a congratulatory call from Taiwan’s president, and express ambiguity regarding the “One China” policy prior to dealing with the CCP?

8. Would a Biden administration explicitly recognize the ruling CCP as a “Marxist-Leninist Party,” “hostile to the United States,” that harbors hegemonic ambitions?

9. More fundamentally, would a Biden administration recognize that China poses the greatest threat of all to America?

10. Would every member of a Biden Cabinet adopt policies geared toward countering China, or ceasing cooperation with it?

12. Specifically, would a President Biden prioritize significant funding of missile defense and the Space Force in his budgets?

13. Would a President Biden continue to vacate the Intermediate-Range Nuclear Forces Treaty?

14. Would a President Biden continue accelerating naval activities throughout the Indo-Pacific?

15. Would a President Biden explicitly encourage U.S. companies to move their supply chains out of China?

16. Would a President Biden impose tariffs as a means of creating leverage over China in a bid to achieve free, fair, and reciprocal trade?

17. Would a President Biden use every possible measure to counter China’s efforts to monopolize strategically significant fields, such as 5G telecommunications?

18. Would a President Biden maintain the substantially increased powers of the executive branch over conducting Committee on Foreign Investment in the United States reviews of transactions that might represent national security threats, and use it to scuttle relevant deals?

20. Would a Biden Department of Justice maintain the Trump administration’s China Initiative, aimed at preventing and prosecuting Chinese espionage and hacking efforts?

21. Would a Biden administration engage in a comprehensive strategic communications effort aimed at the CCP, including resolutely challenging its propaganda, delivering Mandarin pro-democracy and anti-CCP messages, and highlighting tyrannical CCP actions?

22. Would a Biden administration maintain restrictions on visas for Chinese students and scholars in strategically significant disciplines, and investigate and expose potentially corrupting Chinese funding of American higher ed institutions?

23. Would a President Biden order that the savings of U.S. government employees not be invested in funds with weightings toward Chinese companies antithetical to America’s interests?

These 23 excellent questions, and more?? Hell, Biden can hardly find the mens toilet...

Biden cannot even answer what he had for breakfast.

To which Biden responds, “I like pudding” and then sniffs a pre-teen’s hair. 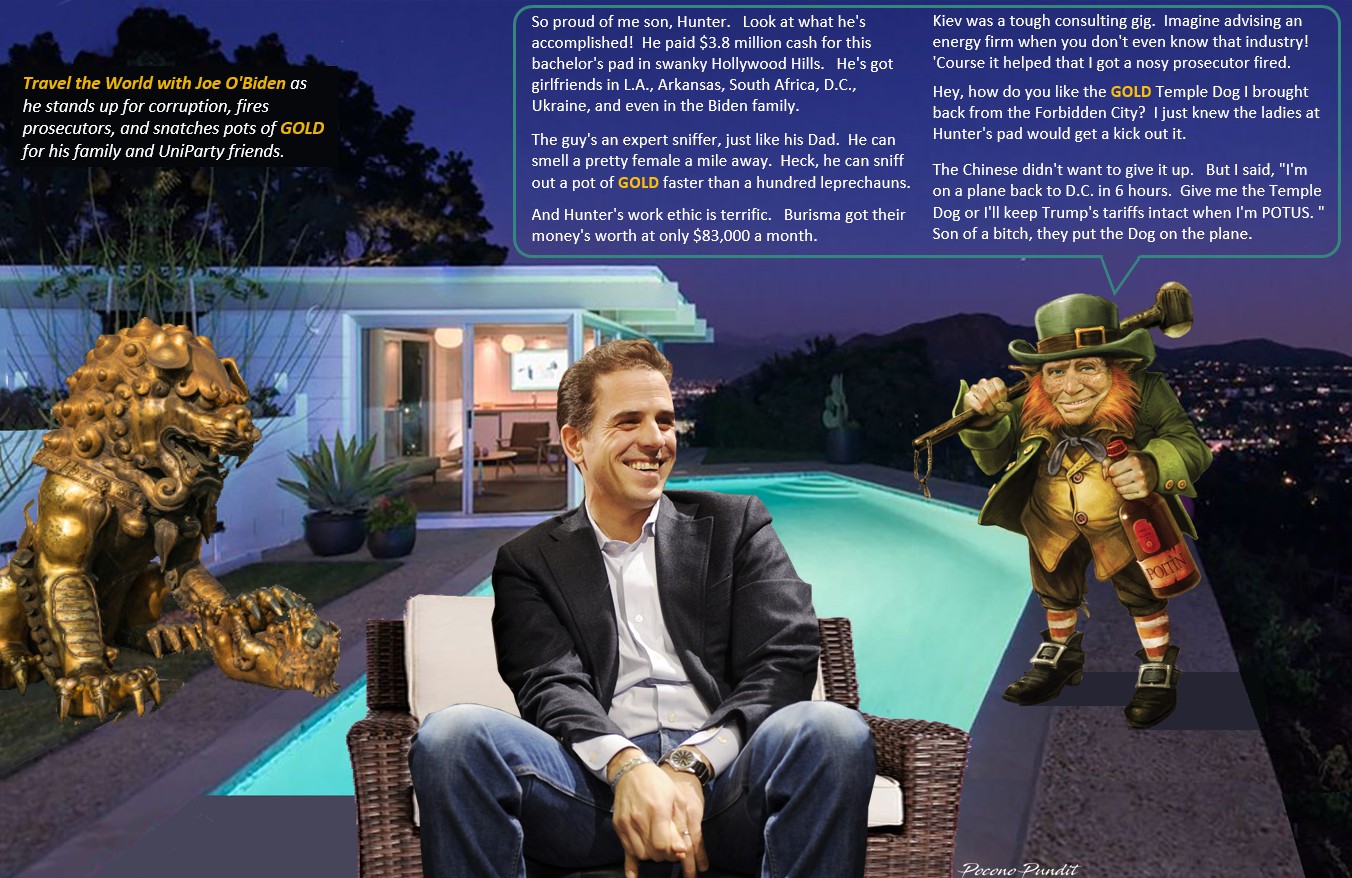 Wow, these are awesome. Thanks for sharing them with us.

10 posted on 05/29/2020 8:09:46 AM PDT by Kaslin
[ Post Reply | Private Reply | To 9 | View Replies]
To: poconopundit
......the author screwed up..... didnt ask the biggest question of all: "Would Biden/Obama, his ne'er do well son Hunter, and the rest of the
greedy Biden family give back their payoffs, and Hunter's $1.5 billion sweetheart deal that got subservient Joe to advance China's interests in the US....
The evidence is compelling.......the lowlife prez/VP advanced China ABOVE the US .......and ignored the safety and security of Americans..........

Soon as Obama crawled out of the Chicago sewers into DC, he began the all-out push via Biden to place China at the center of US policy

W/ the sainted Obama's blessings, Biden spoke at a Chinese event to verify the depths to which the US would sink to get their hands on Chinese sweetheart deals.

Now the Democratic Party presidential candidate, then-VP Joe Biden said he welcomed Chinese intrusion into “all levels of US government, classrooms, laboratories, athletic fields and boardrooms”.....and even the US military.

Biden was sucking up at Mach One speed.....like his mouth was on steroids.

My pleasure, Kaslin. Thanks. Small contribution to Free Republic’s role in MAGA. . .

12 posted on 05/29/2020 12:17:44 PM PDT by poconopundit (Joe Biden has long been the Senate's court jester. He's 24/7 malarkey and more corrupt than Hunter.)
[ Post Reply | Private Reply | To 10 | View Replies]
To: Liz
Great, Liz. And for those who haven't seen it yet, here's the payoff Biden got for these efforts when Hunter pulled down a $1.5 BILLION investment from the Chicoms. Explained below in a New York Post story... 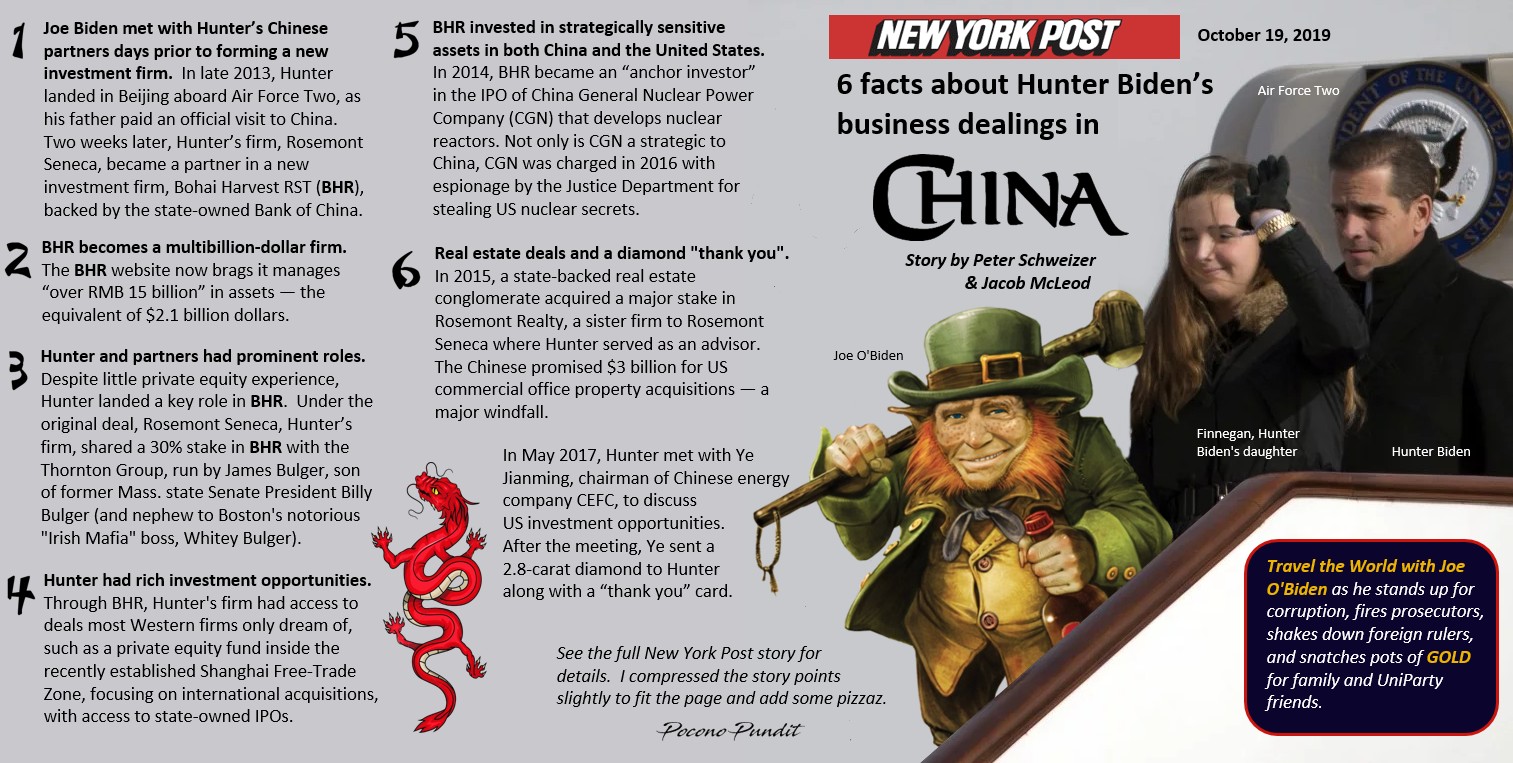 13 posted on 05/29/2020 12:21:27 PM PDT by poconopundit (Joe Biden has long been the Senate's court jester. He's 24/7 malarkey and more corrupt than Hunter.)
[ Post Reply | Private Reply | To 11 | View Replies]
To: poconopundit
Biden pled innocent----said he and Hunter DID NOT discuss the lucrative Chinese deal on Air Force Two.

SPIT: of course not.....this was all planned way ahead in Joe Biden's tax-paid VP office by Biden's tax-paid staff arranging all the details......
Hunter would be ready to cash in when they got to China (thanks to US taxpayers subsidizing the Biden parasites).

Sure enough 10 days after the trip, the CCP gave Hunter a license to do business.