The woman who accused her estranged, NASA astronaut wife of hacking her bank account from space has been charged with making false statements to federal authorities, officials said this week.

Summer Worden, 44, was indicted by a federal grand jury in Houston in what was the latest twist in her bizarre saga with decorated NASA astronaut Anne McClain, according to the US Attorney’s Office in the Southern District of Texas.

Worden, a former Air Force intelligence officer, and her astronaut wife have been locked since 2018 in a divorce that has involved a nasty custody battle.

Last year, Worden filed a complaint with the Federal Trade Commission claiming that McClain illegally accessed her bank account during a six-month mission aboard the International Space Station, in possibly the first crime committed from space, prosecutors said.

She then lodged the same allegation against McClain in a July 2019 interview with NASA’s Office of the Inspector General, officials said.

Worden claimed she opened a new account in September 2018 then reset her login information in order to prevent McClain from accessing her accounts, but the new indictment alleges she opened the account in April 2018 and didn’t change the credentials until January 2019.

If convicted of the charges, Worden faces up to five years in prison on each count and a $250,000 maximum fine.

Worden on Monday claimed that she accidentally botched the dates but later corrected the information.

“I didn’t misrepresent anything,” Worden told the New York Times.

For her part, McCain has vehemently denied the allegations that she stole her estranged wife’s identity.

This article is poorly written.

The two women are going back and forth accusing each other of crimes and it would appear that one is innocent and the other is guilty but it's not clear which is which.

Perhaps the astronaut committed crimes from space by accessing a bank account.
or Perhaps the non-astronaut is just spitefully lying to authorities.

Journalists used to try and clear up confusion. Now they create it.

5 posted on 04/09/2020 7:44:49 AM PDT by dainbramaged (That information is classified. Request denied.)
[ Post Reply | Private Reply | To 1 | View Replies]
To: Oldeconomybuyer
"hacking claims against her NASA astronaut wife.

Yeah well, a couple of real astronauts there.... :)

There are movies with that theme.

7 posted on 04/09/2020 7:47:42 AM PDT by Opinionated Blowhard (When the people find that they can vote themselves money, that will herald the end of the republic.)
[ Post Reply | Private Reply | To 5 | View Replies]
To: Oldeconomybuyer

“Worden, a former Air Force intelligence officer, and her astronaut wife have been locked since 2018 in a divorce that has involved a nasty custody battle.”

Another example of why we should never have celebrated perversity and redefined marriage.

Probably came up through the Obama ranks. Wonder if there were any straight guys on board?

At least Sally Ride kept quiet about it.

re: “have been locked since 2018 in a divorce that has involved a nasty custody battle.”

re: “Journalists used to try and clear up confusion. Now they create it. “

WINNING line of the day!!

I can never get a good connection from orbit.

I confess, I had to read the headline twice...

yeah....I'd rather see the old Saturday night live bit where aliens visited us - "women with eyes on their breasts" 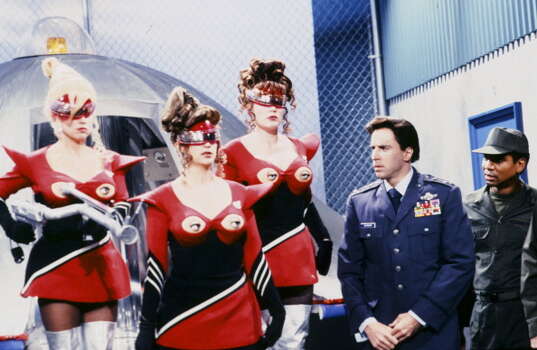 followed by "women with mattresses on their backs"

Those who aren't lesbians can have problems of their own. Lisa Nowak.