President Donald Trump has fired the intelligence community’s chief watchdog, Michael Atkinson, who was the first to sound the alarm to Congress last September about an “urgent” complaint he’d received from an intelligence official involving Trump’s communications with Ukraine’s president.

Trump formally notified the Senate and House intelligence committees of his intention to fire Atkinson and remove him from his duties, to take effect 30 days from Friday, according to two congressional officials and a copy of the letter obtained by POLITICO dated April 3.

“This is to advise that I am exercising my power as President to remove from office the Inspector General of the Intelligence Community, effective 30 days from today,” Trump wrote.

Trump said in the letter that he “no longer” has the fullest confidence in Atkinson. “As is the case with regard to other positions where I, as president, have the power of appointment, by and with the advice and consent of the Senate, it is vital that I have the fullest confidence in the appointees serving as Inspectors General,” he wrote. “That is no longer the case with regard to this Inspector General.”

Trump added that he would be submitting a new nominee for the position to the Senate “at a later date.”

This is breaking news....just happened tonight

Trump’s dead of night decision to fire ICIG Michael Atkinson is another blatant attempt to gut the independence of the Intelligence Community and retaliate against those who dare to expose presidential wrongdoing.

It puts our country and national security at even greater risk.

Let’s see if any other heads roll.

Good. He somehow changed the rules requiring first hand knowledge. But he also claimed the matter was significant even though it did not involve the chain of command in the department that is required by law. So the fired guy allowed a claim to go forward that never should have gone forward and he was overruled by the justice department.

“Despite having a full week to come up with explanations for his office’s decisions to secretly change whistleblower forms to eliminate the requirement for first-hand evidence and to backdate those changes to August, Atkinson refused to provide any explanation to lawmakers baffled by his behavior.”

Will he be escorted from the building, to ensure he doesn’t pilfer the red stapler? 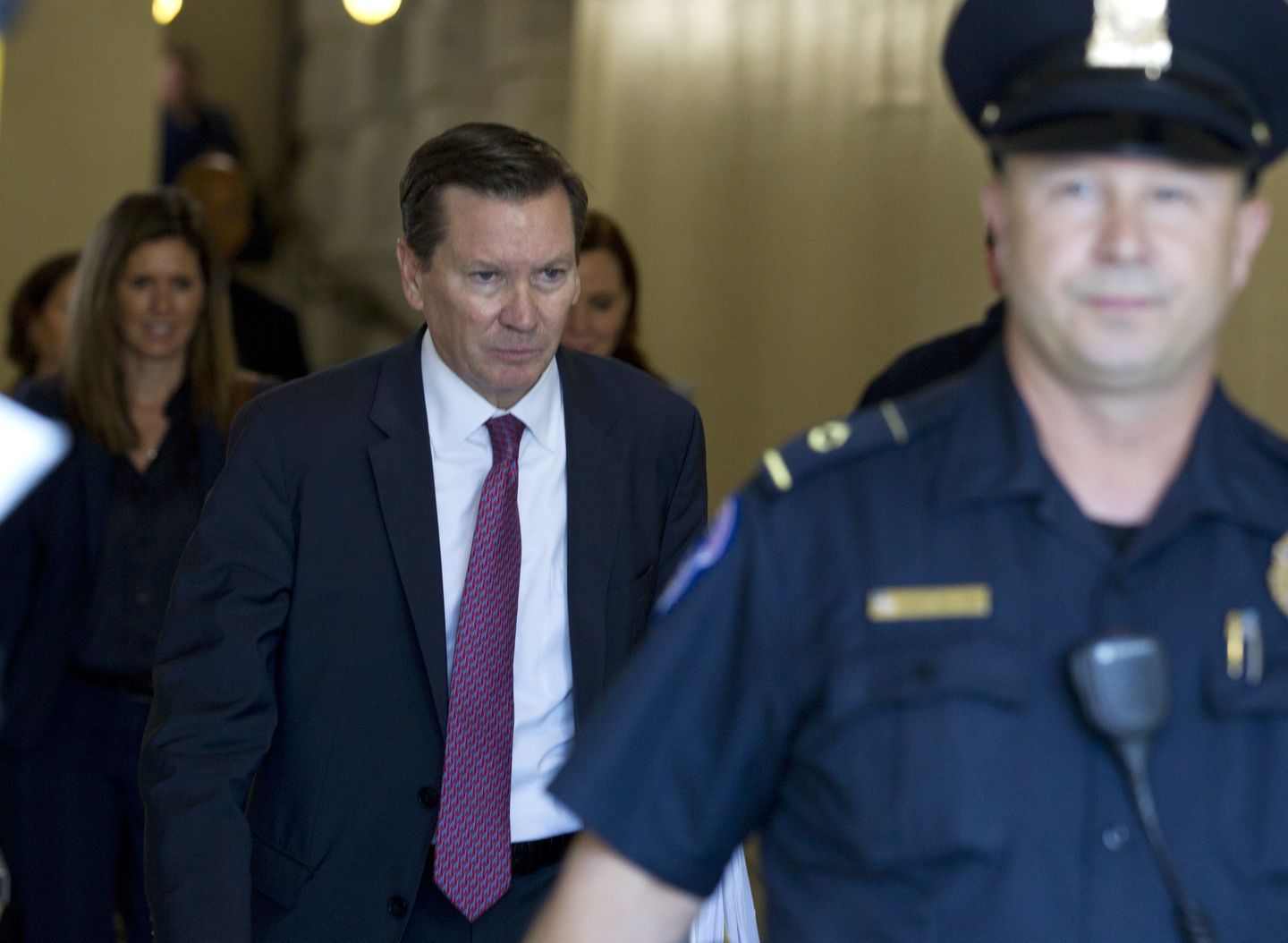 We’ll clean out you desk for you, please surrender all materials on your person, we’ll show you out.

If it’s leftover from the previous administration(s) then dump them all. Just clean house like should have been done were it possible to do so in the beginning of the administration. Better late than never. I want to hear Democrats screaming so loud they spew their brains, or whatever they deem those things to be.

In a storm of bad news, finally a glimmer of sunshine.

EXCERPT As an experienced CIA official on the NSC with the deep knowledge of Ukraine that he demonstrated in his complaint, it is probable that the infamous whistleblower (who sparked impeachment) briefed Biden and likely that he accompanied him on Air Force Two during at least one of the six visits the 2020 candidate made to the country.

A former Trump administration official, speaking on condition of anonymity to discuss intelligence matters, said Biden’s work on foreign affairs brought him into close proximity with the whistleblower either at the CIA or when he was detailed to the White House.

“This person, after working with Biden, may feel defensive towards him because he feels [Biden] is being falsely attacked. Maybe he is even talking to Biden’s staff,” the former official said. “Maybe it is innocent, maybe not.”

Last month, the whistleblower accused President Trump of abusing his position by asking Ukrainian President Volodymyr Zelensky to investigate Biden and his son, Hunter, who sat on the board of a Ukrainian gas company. His complaint is now at the center of a Democrat-led impeachment inquiry, prompting Trump and his allies to cry foul.

Biden was President Barack Obama’s “point man” on Ukraine, making a half dozen trips there in his eight years as vice president. Those trips involved briefings from senior intelligence officials and NSC officers, some of whom traveled with him to Kyiv and elsewhere.

“The Whistleblower has ties to one of my DEMOCRAT OPPONENTS,” tweeted Trump, after the “professional” link was revealed by the Washington Examiner. “Why does the ICIG allow this scam to continue?”

Trump said Thursday he did not know the identity of the whistleblower.

After the report on what Atkinson said, lawyers for the whistleblower immediately insisted their client was not motivated by political considerations, but their cryptic comment fueled speculation about his identity. The careful statement did not rule out that the whistleblower worked with one of the candidates before they started running for president.

“First, our client has never worked for or advised a political candidate, campaign, or party,” said Andrew Bakaj and Mark Zaid. “Second, our client has spent their entire government career in apolitical, civil servant positions in
the Executive Branch.”

Glenn Carle, a former CIA officer who himself blew the whistle on George W. Bush administration efforts to collect intelligence on an American citizen, said the distinction was crucial. “The truth is that the whistleblower would have worked with Biden not in some partisan political sense but as a member of the government,” he said. “It is scurrilous to suppose there was a political motivation.”

He added that it was possible that the CIA officer briefed senators or representatives who were now running for president.