Trump: Throw Rep. Massie Out Of The Republican Party, As House To Pass Coronavirus Relief  And Pass Around The Virus, Too?
Hotair ^ | 03/27/2020 | Ed Morrissey 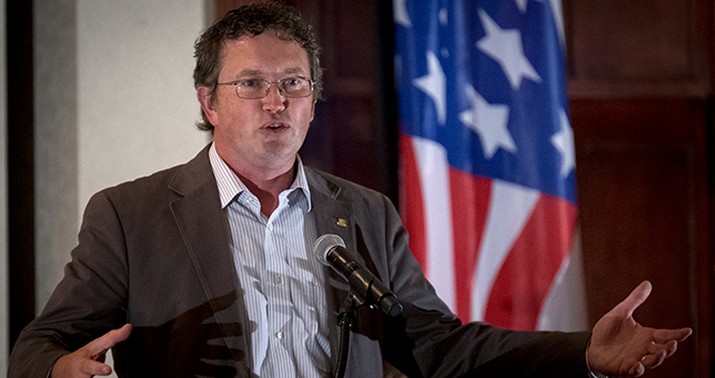 House members will pass the coronavirus relief bill at some point today. The big question is what else they may pass around on the way back to hold a voice vote. Representatives are traveling quickly back to the capitol after Rep. Thomas Massie made it clear that he would force a voice vote on the CARES Act, and his colleagues are less than pleased to take a break from their social distancing:

Several members on a conference call expressed concerns about traveling amid the coronavirus pandemic, noting they have health issues or live with someone with health concerns. Pelosi called the request for a recorded vote “inexcusable”https://t.co/CjsrRVz0RB

Massie’s unpopularity stretches to the other end of Pennsylvania Avenue, too. Trump urged House Republicans to expel Massie from their caucus this morning on Twitter:

…& costly. Workers & small businesses need money now in order to survive. Virus wasn’t their fault. It is “HELL” dealing with the Dems, had to give up some stupid things in order to get the “big picture” done. 90% GREAT! WIN BACK HOUSE, but throw Massie out of Republican Party!

Thanks to Massie, Nancy Pelosi and Steny Hoyer had to call the House back into session. It takes at least 216 members to establish a quorum (down from 218 thanks to vacancies at the moment), which means hundreds of politicians had to travel through airports and on airplanes to get back to Washington DC. That’s not only risky in terms of spreading the coronavirus even further, it’s also expensive as hell, Massie’s colleagues reminded him:

Leaders in both parties encouraged members to return to D.C. for the vote if they are willing and able, while the majority whip asked offices to let them know ASAP if their bosses were planning on making the trip. But many lawmakers are furious: they don’t want to be recorded as absent on what is likely to be the biggest and most historic piece of legislation that they will ever vote on. Yet the short notice, canceled or limited flights and states with different safety guidelines have created a whole lot of headaches — and anger — among members.

Take this tweet from freshman Rep. Dean Phillips (D-Minn.): “Dear @RepThomasMassie: If you intend to delay passage of the #coronavirus relief bill tomorrow morning, please advise your 428 colleagues RIGHT NOW so we can book flights and expend ~$200,000 in taxpayer money to counter your principled but terribly misguided stunt. #thankyou.” Rep. Peter King (R-N.Y.), meanwhile, called it “disgraceful” and “irresponsible” of Massie to force members to come back. And one senior GOP aide put it this way to your Huddle host: “This is the single biggest shit show I have seen here. Pure fucking chaos.”

House Minority Leader Kevin McCarthy (R-Calif.) had been making the pitch to his members — in pressers, conference calls and individual conversations — to not object to the voice vote. But Massie remains a wild card: he thinks holding a vote without a quorum is unconstitutional and is wary of big government spending. Remember, this is the lawmaker who once forced his colleagues to take 35 roll call votes on non-controversial bills, leading to a marathon, late-night voting session just as the government was on the brink of a partial shutdown.

GOP leadership has been in contact with Massie about his concerns, according to a Republican leadership aide. Yet no one is quite sure where he will land and Massie hasn’t ruled out forcing a recorded vote. “They’re trying to convince us it should be a voice vote, it shouldn’t be recorded. And I’m struggling with this,” he told a radio station Thursday. Trump, meanwhile, had this to say: “Let’s see whether or not we have a grandstander.” All the latest on the last-minute drama, from Heather, Sarah and yours truly: https://politi.co/2JjA4fP.

Pelosi insists on holding the vote today to get the bill implemented ASAP, perhaps embarrassed now that she didn’t call members back sooner. When will the vote be taken? They can’t do any voting until they get to a quorum, and it’s anyone’s guess when enough members will have checked in to reach that time. Thanks to declarations from Massie and Justin Amash, Pelosi may need to wait until she’s sure she has 216 votes for passage, too.

One thing’s for sure — Hoyer doesn’t want Massie or anyone else to use this brief session as a soapbox. He has specifically excluded the traditional access to the floor for one-minute speeches today:

Today’s House vote could go quick and easy…or could not. But the floor schedule is not super encouraging pic.twitter.com/kNSVQsXk7S

How will they conduct the vote while maintaining social distancing standards? The House chamber is precisely the kind of mass gathering that lawmakers and governors have exhorted Americans not to hold. It’s a crowded place in normal circumstances, especially during a roll-call vote. Massie might force more than one of those today, too, using procedural roadblocks to slow down progress just as he did before the shutdown. Even if they shuttle in and out of the room, they will have to come in close proximity to each other repeatedly all day long. By the end of the day, the entire House will have to self-quarantine for the next two weeks.

That, of course, is on Massie — but it’s also on Nancy Pelosi and Mitch McConnell. At the very beginning of the outbreak in the US, they both had opportunities to set up a protocol for remote voting to avoid this very scenario. In a pandemic, Congress has to be able to function, especially to oversee the operation of an executive branch operating under emergency powers. Massie is at least correct in one sense that the House Speaker cannot just assume a without-objection status on massive spending outlays. Put that together with the average age of representatives and senators and their vulnerability to pandemic-type infections and you have a recipe for disaster.

It’s almost too late for this crisis, but whatever remains of Congress after the COVID-19 pandemic abates should take up remote voting as one of its first orders of business.

Trump is WAY too loving of Pelosi’s latest Porkulus.

I hope the Republican Leadership strips this guy of any committees he may be on. Is it too late to primary him in the KY Republican Election primary?

They can't do any voting until they get to a quorum ...

Just deem the constitution unconstitional, and pass the darn thing without a quorum. Just one more absurdity in a long string of them.
4 posted on 03/27/2020 8:43:45 AM PDT by Cboldt
[ Post Reply | Private Reply | To 1 | View Replies]
To: SeekAndFind

If they can put this off for a few days, it might prove we don’t need to blow $2 trillion.

$2 trillion dollar bill should at least get a vote. If a congressman is too chicken shit to show up to work, they are the one that should get kicked out.

Looks like a third rate Grandstander named @RepThomasMassie
, a Congressman from, unfortunately, a truly GREAT State, Kentucky, wants to vote against the new Save Our Workers Bill in Congress. He just wants the publicity. He can’t stop it, only delay, which is both dangerous......

...& costly. Workers & small businesses need money now in order to survive. Virus wasn’t their fault. It is “HELL” dealing with the Dems, had to give up some stupid things in order to get the “big picture” done. 90% GREAT! WIN BACK HOUSE, but throw Massie out of Republican Party!

This is terrible. What if this guy is actually representing the views of his constituents. OH THIS IS HORRIBLE!!!

So, instead of having Pelosi and Company to blame for a weeks delay in Passing Legislation to help the Country (whether it actually does or not), Masey has now put the Target on the Republican Party with a willing DNC Media waiting to exploit it for all it’s worth in an Election Year while deflecting the blame from where it belongs.

I am no fan of this bloated giveaway Bill, but all that matters at this point is Public Perception of who is doing something to get the Country through this Crisis.

Im smelling a tactic here. Trump knew about this in advance.

Call to throw Pelosi and Schumer OUT

They’re the problem, not Massie

If the congress critters don’t have to show up for work does that mean they are non-essential?

I'm routinely involved with business meetings of this nature with business colleagues around the globe as, I will bet, are many other people employed by the private sector. Washington, DC could be turned into a city of museums and historical sites with better utilization of existing technology.

And it should be.

When Trump gets this bill he should strip out all the crap and sign what is left. Let it be fought out in court over several years.

In his telephone interview with Sean Hannity last night, he said he had reason to believe that someone was going to do this, but did not say who, or which party.

If was a giant A-hole he'd be Justin Amash.

We can’t have it both ways. Condemn Pelosi for delaying it and then exalt Massie for this absurd stunt which delays it even longer.