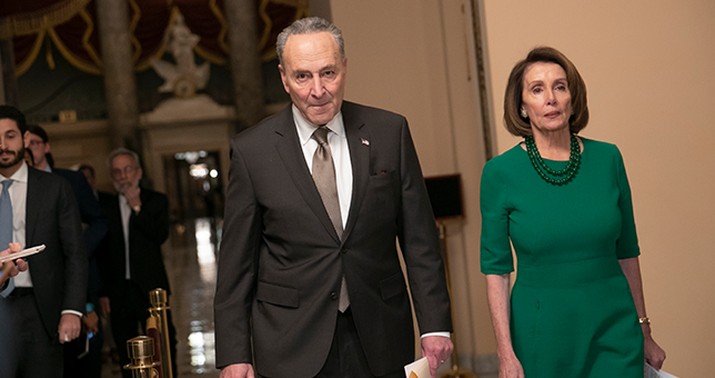 Democrats’ strategic debacle continued apace this morning as news organizations report on their last-minute renege on the coronavirus relief package late yesterday. This is more of a headline than a substantive report, but nevertheless NBC’s Today show makes it clear that Democrats obstructed the bill. If Nancy Pelosi and Chuck Schumer expected the media to carry their water, thus far they have miscalculated:

The new $2.3 trillion-coronavirus aid package was blocked by Senate Democrats on Capitol Hill, where there has also been a new case of the virus, @tomcostellonbc reports. pic.twitter.com/zBCQP7WyN1

Despite some headline revisions yesterday on their initial reporting, the New York Times has opted this morning for clarity:

Senate Democrats on Sunday blocked action on an emerging deal to prop up an economy devastated by the coronavirus pandemic, paralyzing the progress of a nearly $2 trillion government rescue package they said failed to adequately protect workers or impose strict enough restrictions on bailed-out businesses. …

In voting to block action, Democrats risked a political backlash if they are seen as obstructing progress on a measure that is widely regarded as crucial to aid desperate Americans and prop up a flagging economy. But they argued the vote on Sunday was premature given their remaining reservations about the measure, while Republicans heaped criticism on them for creating uncertainty for both the public and the markets.

“This is irresponsible and unwise,” said Senator Susan Collins, Republican of Maine. “They are playing with fire.”

The move enraged Republicans, whose numbers were dwindling after Senator Rand Paul of Kentucky announced on Sunday that he had contracted the coronavirus and prompted two other senators to self-isolate and miss the vote that evening. The Democratic maneuver, they argued, contravened days of bipartisan negotiations and jeopardized faith that Congress was capable of mustering a legislative salve for a shuddering economy.

Democrats got slightly more favorable treatment in the Washington Post, where the headline focuses on the “clash between Republicans and Democrats.” The lead places the blame for obstruction squarely on Democrats, however:

Lawmakers had hoped to pass the enormous $1.8 trillion bill by Monday, but Sunday night they were scrambling to revive talks, with the stock market poised for another sharp drop and households and businesses fretting about an uncertain future.

The Los Angeles Times avoids the blame game, opting instead for a focus on the agreement that a bill is needed quickly:

Although both parties said they agreed on the urgency of passing a measure quickly as unemployment rapidly mounts and jittery markets prepared to reopen Monday, the two sides remained at loggerheads on several key issues, including how much money to provide state and local governments faced with the crisis and how much authority to give administration officials to decide which major businesses to bail out.

As lawmakers and their staffs prepared to meet into the wee hours, Senate Majority Leader Mitch McConnell (R-Ky.), warned of “an ugly” Monday in financial markets without a deal. He planned to try again to bring to the floor a key procedural vote on Monday.

“Our nation cannot afford a game of chicken,” McConnell said, adding that he hoped for a “change of heart” from Democrats.

But Senate Democratic leader Charles E. Schumer of New York said he had been meeting with Treasury Secretary Steven T. Mnuchin, representing the administration, and that there was a “good chance we’ll have an agreement” in the morning.

The hardball tactics from both parties came at the end of a weekend of negotiations among rank-and-file lawmakers and between congressional leaders and Mnuchin.

That might be more notable for the dog that didn’t bark. Normally, the media frames disputes as GOP generated, with political machinations generally credited to Republicans. The media’s “Republicans pounce” narrative has been used so much that it has become practically a drinking game. The lack of pouncing in the LAT’s story — indeed, the lack of any hint of politics — is at least a failure of Democrats’ attempts to blame Republicans for any impasse.

The two sides will do their best to patch things up before the next vote, which has been moved to noon ET after Schumer objected to McConnell’s 9:45 motion. The markets are going to panic if Congress can’t take effective action quickly, which matters a lot more than who gets blamed for this mess. Voters’ retirement security is burning away while Schumer and Pelosi fiddle on Capitol Hill. McConnell will likely propose a fig leaf of more oversight on Treasury’s management of the bailout fund and perhaps incorporate Donald Trump’s suggestion of a restriction on stock buy-backs, made in yesterday’s presser. If that’s what it takes to get a deal done and restore confidence in leadership, both McConnell and Schumer had better do it.

And Schumer should fire whoever’s handling Democrats’ political strategy in 2020.

So if/when Americans die from this, we can blame Schumer and Pelosi directly.

Another thing that might be done is to allow COBRA eligible/covered persons to sign up for subsidized Marketplace coverage.

Pwlosi and Schumer are prepared to destroy the country to advance their ideology. They are betting that their will be enough of a country to have elections in November. If their is economic and societal collapse, their political evilness will no longer matter.

It will be amusing and comic relief to see Biden read his prepared statement on corona virus, get comfortable on the podium, begin to ramble off script and then answer even softball questions. The American people will get a good look at this idiot.

My theory is that in the beginning the media/dem complex started hyping the virus as a weapon against Trump, who originally downplayed the seriousness of the virus. Once it became clear to Trump that a real panic was setting in that risked an economic disaster, he decided to turn it back on the media/dem complex. He “declared war” on the virus, started daily virus briefings, urged massive spending, his popularity went up to over 50 percent. Now the media/dem complex is regretting that they started a panic, but they are locked in. It’s not like they can announce, “hey, it was all a hoax meant to defeat Trump in November.” Trump is forcing them to play the game his way.

The media/dem complex have tried everything they could think of and it’s all backfired on them for the last 3+ years.

Our national unity was short-lived. For Democrats, its back to business as usual. They can’t help themselves.

Pelosi is tearing up America.

“””My theory is that in the beginning the media/dem complex started hyping the virus as a weapon against Trump, who originally downplayed the seriousness of the virus. Once it became clear to Trump that a real panic was setting in that risked an economic disaster, he decided to turn it back on the media/dem complex. He “declared war” on the virus, started daily virus briefings, urged massive spending, his popularity went up to over 50 percent. Now the media/dem complex is regretting that they started a panic, but they are locked in. It’s not like they can announce, “hey, it was all a hoax meant to defeat Trump in November.” Trump is forcing them to play the game his way.”””

This is exactly what I have been thinking... well written.

a dose of Pelosi = a dose of exlax

They're too pig-f***ingly STUPID to realize what just might happen when that feeling becomes mutual.

F the people. It’s more important to get money to,Planned Parenthood, so they can keep killing babies.

You can bet that President Trump is going to address this at today’s briefing.

In the beginning of the year, when the outbreak in China was becoming front-page news, democrats were d!cking around with an impeachment they knew would fail, yet they paralyzed the Congress intentionally, for several critical weeks.

DemocRAT governors saying their shutdowns could last 6 to 9 months. Guess what happens in just over 7 months! The election.

That weird. Here’s nanzi’s official bulletin I got this morning. Even though I don’t even live in cali, just using a san franfecal zip code, i get these:

She left out the fund PPH or else part.

Americans urgently need and deserve a coordinated, fully-funded, whole-of-government response to keep us safe from the widening coronavirus pandemic. Since Day One of this crisis, House Democrats have been hard at work delivering a response that puts Families First while stimulating the economy.

Two weeks ago, House Democrats took the first step, passing a bipartisan emergency response funding package of $8.3 billion of entirely new funds, which the President has signed. Last week, we took the next step, passing the Families First Coronavirus Response Act, which ensures free coronavirus testing for everyone who needs a test, including the uninsured; supports families with two weeks of paid sick leave and up to three months of family and medical leave for eligible workers and enhances Unemployment Insurance; support supports small businesses by fully reimbursing them for providing leave and strengthens nutrition initiatives including SNAP, student meals, seniors’ meals and food banks.

As Congress works to swiftly pass a third coronavirus response package, Democrats are advancing our plan to put “Workers First,” and will soon release our proposal that will:

Take bold action to help workers and small businesses first by greatly increasing Unemployment Insurance and Medicaid, making massive investments to help small businesses survive, expanding paid sick and family leave and putting money directly into the hands of those who need it most. We must ensure all workers are protected from the loss of a paycheck or that no family falls into financial ruin because of this pandemic.
Treat this outbreak as the health crisis that it is: with a Marshall Plan to rebuild our health care infrastructure and ensure the resources are there to test and treat everyone who needs it.

Democrats continue to insist that any economic stimulus proposal must include new, strong and strict provisions that prioritize and protect workers, such as banning recipient companies from buying back stock, rewarding executives and laying off workers.

During this difficult time, we will continue to work relentlessly to protect families’ health, economic security and well-being.

The Treasury Department and the Internal Revenue Service have announced that they are moving Tax Day from April 15, 2020 to July 15, 2020 in response to the COVID-19 outbreak to allow individuals and businesses additional time to file federal returns and make payments without interest or penalties.

California has also extended the filing and payment deadline for personal and business state tax returns to July 15, 2020.

For any taxpayer anticipating a refund, they should file their returns quickly in order to receive their refund checks as soon as possible.


On March 19, the California State Public Health Officer and Director of the California Department of Public Health ordered all individuals living in the State of California to stay home or at their place of residence, except as needed to maintain continuity of operation of the federal critical infrastructure sectors, critical government services, schools, childcare and construction, including housing construction. For more information on this Executive Order, visit here.

We will continue to work closely with state and local officials to protect the health and well-being of all Californians in order to slow the spread of COVID-19.

Remembering the Medical Device tax in the Affordable Health Care Act too,
same Democrats who passed and/or supported the law are now angry about scarcity of Medical supplies.