Rep. Alexandria Ocasio-Cortez (D-N.Y.) used her Christian faith to ardently defend the rights of LGBTQ Americans during a congressional committee hearing on Thursday ― calling out the “bigotry” of those who use Christianity to discriminate against this marginalized community.

The lawmaker suggested that Jesus himself would be “maligned as a radical” by today’s Congress for his message of love and inclusion.

She said it strikes her that “if Christ himself walked through these doors and said what he said thousands of years ago ― that we should love our neighbor and our enemy, that we should welcome the stranger, fight for the least of us, that it is easier ... for a camel to go through the eye of a needle than for a rich man to get into a kingdom of heaven ― he would be maligned as a radical and rejected from these doors.”

Ocasio-Cortez was speaking at a Committee on Oversight and Reform hearing on the ways the Trump administration has tried to undermine LGBTQ rights.

TOPICS: Culture/Society; Editorial; Government; US: New York
KEYWORDS: anotheraocthread; aoc; jesus; ocasiocortez; rentfree; rentfreeonfr Navigation: use the links below to view more comments.
first 1-20, 21-40, 41-60, 61-80 ... 101-117 next last
Among the witnesses at Thursday’s hearing was Evan Minton, a transgender man who is suing a Catholic hospital in California for canceling his hysterectomy. The Trump administration had cited Minton’s case to justify why the conscience rule was necessary.

Ocasio-Cortez said that her faith teaches her that Minton’s life is sacred and that he deserves equal access to medical care.

Ocasio-Cortez, who identifies as Catholic, frequently refers to her religious beliefs on Twitter. Shortly after winning the 2018 Democratic primary, she published a piece in the Jesuit magazine America describing how her Catholic faith inspired her to fight for criminal justice reform. Echoing Pope Francis, she has also expressed support for refugees by pointing out that Jesus himself was a refugee.

The congresswoman said Thursday that America has a history of using scripture to justify bigotry.

“White supremacists have done it, those who justified slavery did it, those who fought against integration did it and we’re seeing it today,” she said.

She accused the Trump administration of advancing the idea that “faith is about exclusion.”

“I am tired of communities of faith being weaponized and bein

I REALLY hate to point out the obvious (again), but I’ve news for AOC...she speaks of what she does not know! Jesus was considered a radical in His time. He’s be considered very, conservative today. She’s got it backwards.

Elective surgery. You want it, you pay for it.

Democrats invoke Jesus when they want to smear conservative Christians as not being Christ like. In all other contexts they demand that Jesus never be mentioned in public. So I’ll take their religious instruction and tell ‘em to shove it.

Don’t you love it when atheists start quoting scripture and telling Christians what the Bible says. Wonder why she didn’t quote Romans 1?

I am pretty, sure AOC would be up with the scribes and pharisees 2000 years ago pushing for a crucifixion.

I can only hope you get the opportunity to ask her that one day. Be sure to record it and post on YouTube.

Liberals use religion when they run out of other tools of deception. It’s the last refuge of scoundrels and criminals.

Christ never told us to accept all things and endorse all behaviors.

And I’ll look to someone besides Alex for my moral guidance, thank you.

She’s a millstone candidate for sure. Advocating abortion and perversion. There’s going to be a lot of hell to pay.

I do love all of my neighbors. But when they throw their perversion in my face I reject the perversion not the person.

Jesus was about as inclusive as the liberals: join up, or go to hell.

The Catholic Church opposes sterilization. AOC is free to disagree. She is free to urge the church to reconsider its position. She is free to formally leave the church and declare openly as the pagan she clearly is. But it is totalitarian to demand that a church related organization violate its longstanding doctrine on such a matter. 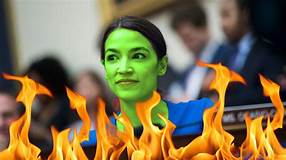 The father of lies has many agents.

4 “Haven’t you read,” he replied, “that at the beginning the Creator ‘made them male and female,’

AOC and her party would stumble at those words alone.

16 posted on 02/28/2020 5:26:13 AM PST by rightwingintelligentsia (Democrats: The perfect party for the helpless and stupid, and those who would rule over them.)
[ Post Reply | Private Reply | To 1 | View Replies]
To: sevinufnine
The lawmaker suggested that Jesus himself would be “maligned as a radical” by today’s Congress for his message of love and inclusion.

Oh, is she referring to Jesus calling the Pharisees a brood of vipers? That kind of love and inclusion? Or how about Matthew 7:14, “Because strait is the gate, and narrow is the way, which leadeth unto life, and few there be that find it.” Doesn’t sound very inclusive to me. That wench doesn’t have an ounce of faith in her whole body.

AOC brought her Jesus-In-A-Box to the hearing.

Very handy totem to have on hand to fondle when she and other ideologues run out of ideas to flog.

Too bad their fondling doesn’t extend to Christ.

I have always said that if someone thinks that Jesus was some super-tolerant, inclusive, laid-back namby-pamby liberal, they should go and read the entire Book of Matthew in one sitting, then come back and tell me if they still agree with their original assessment.