U.S. officials have told Sen. Bernie Sanders that Russia is attempting to help his presidential campaign as part of an effort to interfere with the Democratic contest, according to people familiar with the matter.

President Trump and lawmakers on Capitol Hill have also been informed about the Russian assistance to the Vermont senator, according to people familiar with the matter, who spoke on the condition of anonymity to discuss sensitive intelligence.

It is not clear what form that Russian assistance has taken.

I’m glad but the idiocy of all this is the Russians can’t do a damn thing to influence our enormous election process.

They don’t want to help Trump. They want to create the *illusion* of helping Trump, as a means of tying him and us in knots. The same reason theDems have been doing this stuff.

They also have supported anti-Trump stuff after the election, anti-fracking stuff, Black Lives Matter, and other stuff.

As they have for much of the last century, the Democrat party has cooperated with them - some as idiots, and some quite willingly.

They probably want him to defect to Russia and become their Czar!! He’s beyond qualified. Imagine his surprise when he gets there to find there isn’t any pool of money to dive into! Guess then capitalism wouldn’t look so bad to him. But he isn’t fooling us - he has nothing against capitalism, he’s just a fool who craves the attention and we probably would too if we looked like him.

Can someone come up with a single example of how Russia could influence any American to support or oppose a political candidate.

The cable news shows are the ones that try to influence elections and they sure don’t support President Trump. 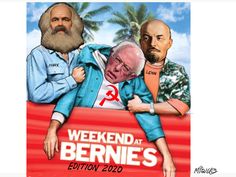 When has Russia ever wanted a strong, competent, nationalist American president?

This is why the enitre Trump thing was such an easy lie to see through.

My son is running a social experiment. He is wearing a Bernie 2020 t-shirt for the next two weeks. He has already been spit on and had a beer bottle thrown at him. I can’t wait to see what happens when he goes outside.

Can this get any better? :D

WHUT? The leftards and the MSM kept harping like idiots that Trump is in cahoots with the Rsskies. hmmm, lemme think of the lefty spin here: “Trump told Putin to help Bernie as a head fake to make the media go away”

30 posted on 02/21/2020 2:37:43 PM PST by max americana (Fired ONE libtard at work at every election since 2008 because I enjoy them crying)
[ Post Reply | Private Reply | To 1 | View Replies]
To: BenLurkin
Helping Trump would mean helping America.
Exactly! Even IF the Russians were capable of influencing the election what would they have had to gain by sabotaging Her Heinous' campaign? Especially since she enabled Putin to get his hot little hands on all that uranium. Whoever wins the train wreck of the Dem primary will be like 0bama 2.0
31 posted on 02/21/2020 2:38:03 PM PST by Impala64ssa (Virtue signalling is no virtue)
[ Post Reply | Private Reply | To 3 | View Replies]
To: Bigtigermike

I don’t understand how the Russians could influence an election. For instance, how does anything change the mind of a Sanders supporter into voting for Trump? Or a Trump supporter going for Sanders.

And in retrospect, what Trump foreign policy has benefited Russia?

Or the FBI could hire informants to spy on the Bernie camp, get FISA warrants to listen to one of his top aides who met with any Russians over the past 80 years (or went to a Russian restaurant or drank Russian vodka), leak reports to the media about the matter and then provide info to Bernie’s opponents.

“It’s is getting ridiculous”

Exactly and that’s what Russia wants. They want to cause chaos or at least disruption.

The Russians are also supposedly giving money to anti-fracking organizations

Bernie replies “Yes, of course they are, now shut up, it’s supposed to be a secret”.

Had to check twice to make sure it wasn’t from the B Bee.

Deep State Democrats hate Brnie, too. POTUS is next to get hit with this garbage I expect. Then Fake News will spin at the RUssians want Bernie OR Trump to win.