Prayers up for Rush and his family!

Listening to Rush has always been inspiring and uplifting but more so now than ever. This man has a serious health issue and you’d never know it. His enthusiasm and outlook on life in general hasn’t missed a beat. If anything, the tone of his voice is as if the Doctor just gave him a clean bill of health. Amazing.

AM talk radio now dominates my time in the car. If I’m not listening to talk, then I listen to Sirius radio where I can pick the genre I want to hear.....I haven’t listened to FM in over 7 years.....

Tip of the Spear. Precisely.

Rush has made an enviable legacy. He is much important to our country and its history than the vast majority of our so-called “leaders”. Rush is a true leader.

And my main comment when talking about him is the fact that this college dropout demonstrated far more knowledge and logic than the vast majority of those who consider themselves to be elite and educated.

I thank God (you know, that entity that libs love to not believe in) for giving us Rush.

Beautiful tribute. I’m sad, even teary eyed, but so grateful we have a man among us like Rush Limbaugh. 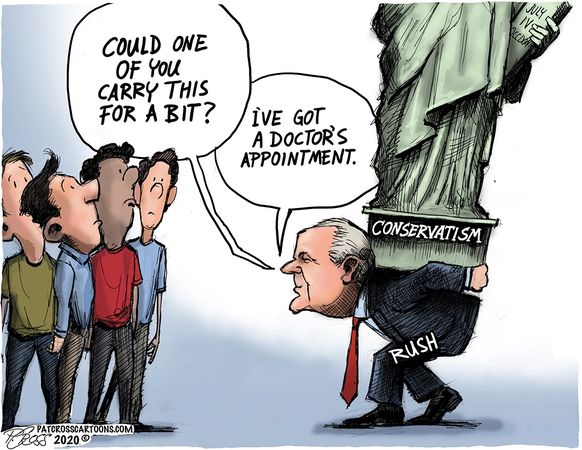 Rush is that uncle at a family picnic that everyone gravitates towards. Opinionated, interesting, well-spoken, intelligent and positive.

I listen to him now a little differently than before.

I truly believe that God is using Rush to draw more souls to Jesus. He is in my thoughts and prayers each day. May God continue to watch over all the Limbaugh family.

Perfect is right... Rush is not going to stop fighting the good fight unless he’s forced to and our prayers for him need to be unceasing...Trump was sent to us as was Rush!!! There’s a lot of damage to undo and no one else on the scene to do it!

Someday Jimrob will be acknowledged for the similar miracle that he has performed on the Web.

Probably because I’ve NEVER failed to get through to comment.

God Bless Jim Robinson, and his thousands of compatriots!!

26 posted on 02/14/2020 2:09:35 PM PST by Elsie (Heck is where people, who don't believe in Gosh, think they are not going...)
[ Post Reply | Private Reply | To 1 | View Replies ]
To: Kaslin
On January 12th, 1951, Rush Limbaugh was born in Cape Girardeau, Missouri.
Under four months later, I was born in Glendale, California. Within two
and a half years, I would wind up with my grandparents in Diamond Grove, Missouri.

That town is about 300 miles West of Cape Girardeau, but over the years
I've thought Rush and I probably had roughly the same exposure to education,
in our early years.

Back then there was a no-nonsense atmosphere. You minded your folks, and you
minded at school. Local authority was instilled. You did what a police officer
told you to do. You minded your elders.

We both went through the duck and cover drills, just the sort of thing that would
save our hides if the big one was dropped near us.

In those days teachers had pride in our nation. They taught us what a great nation
it was. We pledged allegiance. We played nicely with the other kids for the most part.
We heard our elders talk respectfully and proudly of the United States.

Loosely, I've kind of thought of Rush and I being a product of a generation of
middle America. We had sound values, a love of our nation, a love of our fellow man.

Leftists don't get this, but Rush isn't a racist, and neither am I. Both of us
are happy to see minority people be successful. One of my biggest pleasures to this
day is seeing a well grounded Black person demonstrate that they grasp and prefer
the same set of principles, that I do. Why? It's because they are the same middle-
class values. If they're running a business, or pushing an effort, I love
to see them doing well.

I'm not person who had to listen in every day. In fact I have gone for years in
between times when I listened to him. It wasn't that I didn't agree with him, it's
just that we agreed so much, it wasn't necessary. Could I have picked up some good
stuff from him then. Why sure, without a doubt.

You see, I'm grounded in the same beliefs that Rush is. I grew up in that
middle American fly-over country Rush did. He and I are identical at our core.

Have I always agreed with Rush on everything? Of course not. I saw some issues
differently than he did, but it wasn't Conservatism dogma related. It was government
corruption related. Rush didn't see TWA-800 the way I did.

There are other times when I thought he was a bit too forgiving of the Bushes.
Look, this didn't shake my faith in him. We are each our own person, and we're
going to have our own skew on things.

The one thing I do know, is that Rush will always be in my head. He will
never know it, but I'll be in his too, because the things I believe at my core,
Rush believes in.

We are in a way brothers of our time, sharing a common respect that was instilled
in us. We love our nation and our fellow man.

We both know that Capitalism and the bedrock values of our Founders and our
Founding Documents, the very foundation of who we are, is the best system on earth.

If you don't believe that, all you have to do is reflect on China in 1990,
and China today. Capitalism transformed that nation in under 30 years,
perhaps even 25.

Yes, the Communist Government is still what is has always been, but when China
wanted to come up to speed and become a global player, what system did they
implement to get the job done?

We have the rock solid fundamentals. Even the real Communists know it.
The idiot Left in the United States has never gotten Communism. They have this
romantic notion that equality will soon spread across the land and everything
will suddenly be fair. Well, it won't.

Rush and I grew up with the best object lesson a kid could ask for. We saw
the USSR and what it did to it's own people.

Rush is my brother from a different mother (and dad). I hate like hell to see
him having to deal with his illness. It sucks.

It not only causes me a sense of sorrow and loss, it causes me to face my own
mortality.

Life comes and it goes. Rush and I have lived a good life. We got to observe
ventures into space. We got to live to seen Ronald Reagan. We got to see Donald Trump.
We shared so many experiences in our lives, public exposure to so much.

I hope that Rush is around for another thirty years. I do because he has become
a fixture in my life. When I walk into the room I turn on the light. When I walk
by a radio when Rush is on, I flick on another light in the darkness.

Without Rush, there would be an empty space in my life, where something
incredible used to thrive.

When Trump is gone, I will need Rush to get me through, as he did after Reagan.

If ever something happens to him, we'll get through it, as he would.
It won't happen without incredible sorrow.

So we think warm thoughts. We ponder incredible wishes. We pray to God and
hope for the answer we want to hear/see.

I found RUSH due to my own unique environment.

It was 1990 and I was working the bombing ranges in AZ.

My employer was very cheap and all we had was AM radio in the service trucks.

I think it was KFI out of Phoenix.