To reform the process for enforcing the immigration laws of the United States, and for other purposes.

Be it enacted by the Senate and House of Representatives of the United States of America in Congress assembled,

This Act may be cited as the “New Way Forward Act”. TITLE I—End Mandatory Detention and Require Probable Cause for Arrest

SEC. 101. Phase-out of private for-profit detention facilities and use of jails.

TOPICS: Breaking News; Crime/Corruption; Government; News/Current Events; Politics/Elections
KEYWORDS: aliens; braking; criminalaliens; criminals; deportation; illegalimmigration; invasion; sanctuary Navigation: use the links below to view more comments.
first 1-20, 21-40, 41-60, 61-74 next last
I'm not sure of the copywrite of congressional bills, so I'll summarize what the bill consists of here quickly- but do go and look at this bill folks, it's very scary- These people in the House of Representatives want to fundamentally change EVERYTHING about this country- They feel that our country are is run by 'illegal invaders' (Us, law abiding legal citizens) and so they want to fill this country with ILLEGAL So Called Immigrants- these folks are the actual illegal invaders- coming into an established country, and breaking all established laws-

In ahort- they want to make deportations illegal, but that's not the end of it- they want you- the Americana tax payer, to pay to bring back every single person of the more than 480,000 deported illegal immigrants regardless of whether they are criminals, gangsters, drug dealers, rapists or not etc back into this country to live here forever- never to be deported again no matter what crimes they commit.

California just let 1000's of illegal alien criminals go in their state, protected under the illegal 'sanctuary state' laws they have now- 1000's of violent vicious rapists, murderers etc walking free in the streets among California's law abiding citizen's children, wives, girlfriends, etc- But no, that is not even good enough for them- These liberal Anti-Aemricans' and make no mistake, these folks ARE Anti-Aemricans- They want to bring BACK into our country rapists, murderers, kidnappers, child predators that were deported-

The bill also seeks to significantly reduce criminal convictions and sentences for those in our country illegally- AND they want to completely and entirely do away with ANY and ALL criteria used to deport violent criminals- So Vicious rapists, Vicious child rapists, Heinous murderers, Vicious Drug kingpins, Violent kidnappers etc etc will never be deported again if this bill passes-

This is how the left are trying to fundamentally change all our existing laws- The left claim that we, law abiding citizens, are white supremacists who don't want 'hard working immigrants' to come to this country- so they are paving the way to thwart our laws, thwart our wills, and allow ILLEGAL INVADERS to come here legally under new laws- Not allowing people to come here and break our laws is 'white supremacy' according to this bill- apparently that wording is in the bill-

Like Tucker says, in the following link, which i would highly recommend folks watch due to the seriousness of what they left are trying to do to this great nation of our with bills like this one, illegal invaders will now be the protected class in this country, and we the legal citizens, are the suckers who the left are forcing to pay for it all- The left want you, the taxpayer, the suckers, to pay for every single deported illegal invader to come back here to suck off our government's welfare system. You an I- the suckers, must foot the bill to bring them back, regardless of the vicious brutal violent crimes they have committed against our law abiding citizens

Above tucker video on this disgusting Anti-American, pro Violent Criminal Illegal Invader bill is well worth 9 minutes of your time 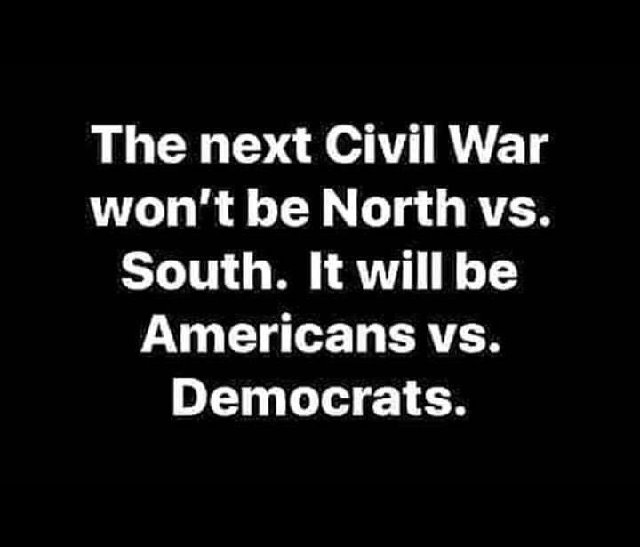 Let’em all in. Let’em stay.

Please tell me you know that all Congressional bills belong to the people and there is no way in the world that it can be off-limits to reproduce them.

This should be called the “Dead on Arrival in the Senate” bill.

Smells of divided loyalty, or more accurately, Mexican loyalty. The enemy within.

Watching Tucker explain it makes you think how could any sane person want this bill to pass. For example, in the bill the dems want the convicted criminals that have been deported flown back into the US at the tax payer’s expense and then given free health care. It’s absolutely insane!

The dems are like robots that don’t think and repeat their talking points like the Stepford Wifes. Or they are like the robot on the old Lost In Space that use to say “Crush Kill Destroy” — but now the dems say “Impeach Crush and Destroy the Republic.”

What a psycho bill.

Breaking news for some bill that won’t pass?

Property of We the People!

Don't be afraid to act like a sovereign citizen of the Republic. :)

There is an interesting read on this same bill, linked here - http://www.freerepublic.com/focus/f-chat/3814357/posts

No, it won’t go through right now- that isn’t the point- the point is that they will likely eventually get a majority- and bills like that will go through-

thanks- will look into that htread-

and just for hte record- democrats ARE already doing some of the crap that is in the bill already on a lower level- letting illegal immigrants go with deporting them- protecting them under sanctuary state ‘laws’ which are illegal- Refusing to prosecute them- allowing them to drive and fly WITHOUT requiring them to get enhanced driver’s licensees like the states require of their legal citizens etc- letting them go without any bail, back out into the streets- despite being violent felons- etc- so don’t say it ‘sill never pass’- parts of it have already passed in a sense, and liberals are just itching to get control again in congress and the presidency to pass Anti-American crap like this- just because it won’t pass during Trump’s term doesn’t mean it won’t eventually pass-

Certainly you don’t suggest that we shouldn’t even post about it because it ‘won’t pass NOW during during Trump’s Term?” Surely you know that democrats will gleefully pass a bill like this when and if they get control of government? So not sure why the mocking tone of your post?

Yes, this term under Trump and GOP control in senate it’s dead- but it will live on till liberal gain control again- which is why folks like Tucker are making the bill known- gives insight into how Anti-American the left are, and how close we really are to losing our nation to the scum on the left-

Agreed- He’s likely got relatives in Mexico that wanna come here without goi9gn through legal means to do so- but the frightening thing is how he and his scummy ilk on the left want to destroy this great nation and hand off control to foreigners- The left are pushing to see how much they can get away with, and frankly they are getting away with a lot- releasing illegal felons into our streets- protecting them in sanctuary states, releasing them without bail, trying to get open borders (Thankfully Trump is shutting them down- but don’t be surprised if a liberal wins presidency that they tear down the walls)- refusing to prosecute violent illegals etc etc

The sponsors of this bill represent about 4-5 factions on the Left in the Democrat Party. I’ll try to summarize each and add a few news:

Racists: Jayapal; Pressley?; Norton (Eleanor Holmes Norton - we would need to see her FBI and NYPD file to know whether she was ever a secret member of the Communist Party USA because one of her NYC cohorts, a black congresswoman, was identified as one); Bobby Rush; Meeks; Bass - very strange woman - I wouldn’t let her walk the streets when children are present.

Tanaka - must be mad at the US for bombing Hiroshima and Nagaski, as well as recovering from Pearl Harbor. Strange creature he be from what I’ve heard from him when he speaks.

Lots of these people’s communist, racist, extremist backgrounds can be found at www.keywiki.org and some at www.DiscoverTheNetwork.org. They are basically traitors to America and hatemongers par excellence.

Some others I don’t much about so I won’t list them other to say that by supporting this bill, they are pro-criminal, anti-law enforcement, anti-justice, psychopaths and future accessories before the fact to robbery, rape and murder.

Other than that, they are typical Democrats!