*NOPE = “Never Obtain the Presidency, Ever”

Listen at the link above WHILE you FReep! Also, Sharyl Attkinson’s Full Measure: Watch live at 9:30 EST.

The only corrupt dictator in DC is Nazi Pelosi. She and her brownshirts in the media have managed to hamstring the President through lies and inuendo with the complete abuse of her power in the House. We are now watching that climactic conclusion with her Seinfeld Impeachment, an Impeachment about nothing.

This impeachment serves its purpose just like the other $50 million Mueller investigation which recreated the Cold War while wearing a Che T Shirt. The same people who adored every Russian proxy like Cuba, Nicaragua, Venezuela and SE Asia is all the sudden worried about Russian aggression. You may also be interested in a bridge in Brooklyn Nancy would like to sell you.

The purpose of this Peach Fo Fi is to protect the DNC corruption. Every one of these sanctimonious crooks have their hands in the cookie jar starting with Paul Pelosi Jr who is just like Hunter Biden. It is perfectly fine to take bribes from every corrupt player in the world and if you ax any questions then you will be investigated and Peached. This is the definition of justice inside the Beltway of Bribes.

Paul Pelosi Jr was on a board for Viscoil which did business in Ukraine which of course this entitled ruling class son had no credentials to be on the board. His mother even did a cameo in an ad for this money laundry https://www.youtube.com/watch?v=g1KfU5ifhqE. Everyone knows just like Hunter Biden you launder the bribes though the family who enjoy the favors and provide the expected Christmas gifts of cars and houses.

This is nothing more than the swamps latest and most desperate attempt to hide their corruption. Every one of those people who are screaming about President Trump’s corruption are pounding on the podium to hide their own guilt. Every one of the candidates running for President have either a lot or a little mud on their shoes and in Quid Pro Joe’s case only has a hand sticking out of the quicksand. He is every bit as corrupt as Pelosi and should not have any business running for President. If he could not keep his hand out of the cookie jar as Vice President what makes anyone believe he would as President.

The bigger question about Slow Joe is why nobody running against him is pointing out his obvious corruption. You must be either as dumb as a stump or fine with the way things are done inside the District of Corruption, with the third option being your own guilt. None of those possibilities are good and all disqualify the candidate from taking the office by their own standard. Every one of them should be impeached if a phone call asking about corruption and leveraging aid is their standard what is sweeping bribes under the rug or taking bribes through family members?

The reason none of those candidates should be elected is they are most likely all corrupt except the billionaires. They have all been inside the swamp far too long and been too successful to not be corrupted.

To not call out the most obvious corrupt politician since Hillary disqualifies them from becoming the most powerful man in the world. The temptation to make millions if not billions is too great for any of them to handle. Even Bernie showed he could be bought off in the last election which makes him as guilty as any of them and not the ideologue he portrays. His not calling out Joe and then defending him makes him Joe’s shield.

This abuse of power is their last desperate attempt to regain their wealth factory. The swamp has fed the creatures of it for generations and Trump is the first President outside that closed society since Reagan and far more independent than Ronald Magnus. They put the Bush leash on Reagan early which likely made him less aggressive as he could have been. A second term of Trump would be their greatest nightmare as he could destroy one after another swamp creature and truly drain the mud pit. What would be the point of being Speaker of the House if you cannot get favors?

This Kangaroo Court impeaches all of DC. The only guilt it has proved beyond a shadow of a doubt is Hunter Biden was given a high paying board appointment because his dad was VP and Slow Joe used our assistance money to get an investigator fired. The only reason we know this is because he was bragging about it on tape, he is the one who should be found guilty of bribery.

What we really have found is Ukraine was the Cayman Islands of Europe where all drug, sex trafficking and every other corruption dollar was laundered through gas companies like Burisma and Viscoil. It is also where campaign money is washed from Russia, China and every other country through Cyprus to the various political foundations in America to be given to politicians which is what this is about.

Now we go through this weeklong clown show minus the slapstick to listen to the House managers tell how much they hate the President. There was not a single piece of evidence or an actual crime other than the one everyone watched Slow Joe commit. This is to stop the President from working with Putin and work together on both ends to destroy the Ukraine money laundry. The two of them would be unstoppable to kill their Golden Goose.

When you clear away the smoke and mirrors you will find they are really terrified from losing one of their largest funding machines in the entire world so he must be stopped.

The truth is they are all in on stopping Trump for killing their Golden Goose as well as dozens of bureaus Gooses from the profits of heroin and sex slave trafficking. Go to any Russian bride website and you will find the Ukraine or look into the Ukraine sex trade and you will find girls tricked into foreign jobs and ending up in Sheik harems or sold to prostitution houses locked and raped for months before escaping. This is why they are impeaching Trump and protecting Biden. Bet Hunter could tell some tales about those Ukrainian beauties.

Trump has exposed everything with this Mueller Russian Peach Fo T Fi. This is what life looks like in the mud bogs and to what levels of abuse of power they will go to protect themselves.

Everyone knows the two articles are not crimes and in fact are tools used by the White House every day of the week and have since George Washington. This is a temper tantrum from the hatred of a man and the hiding of a major bribe source. This is the funding country for hundreds of politicians and dozens of covert bureaus.

This is the Politics of Personal Destruction taken nuclear to stop him from re-election. This is nothing more than the third level of Hillary’s dossier and America sees it loud and clear. 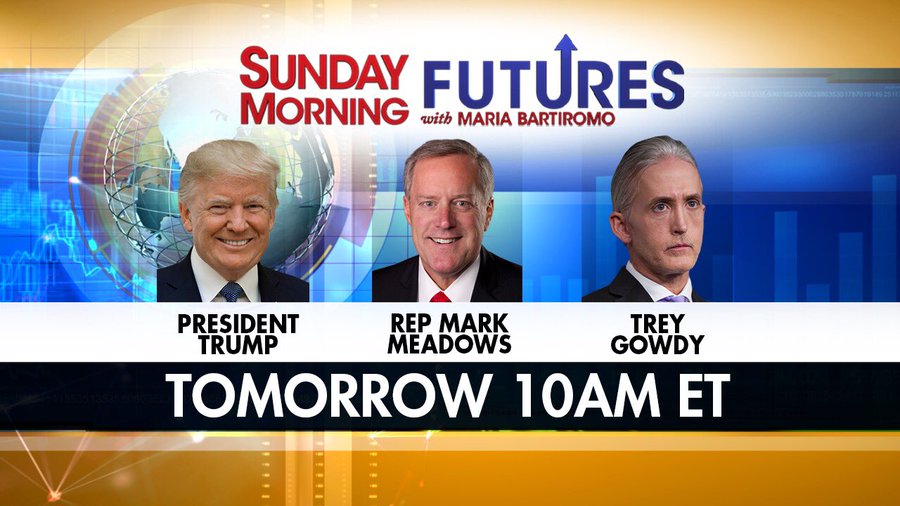 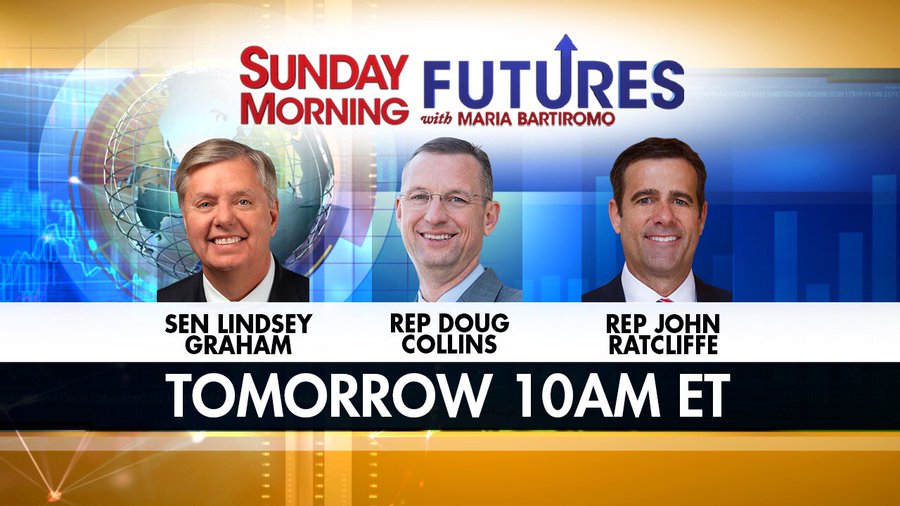 Linda has been camping out on my last nerve lately.

He is so wishy-washy. I don’t care if he’s gay, just stick with Trump!

There is absolutely no doubt of the Crowdstrike/DNC/Hellary satanic cabal involved in the deaths of Seth Rich and Sean Lucas.

Will we ever see justice brought to these satanic animals?

I hope so...but highly doubt it.

That’s the first mention of Soros’ connection to the coronavirus and I have no doubt he and Chinese are involved in biotech war viruses to be used against the USA.

Miss Lindsey, along wit her late husband Juan McCain, were up to their eyeballs in corruption & sedition in Ukraine, Syria, ISIS, ...

It’s not surprising he’s doing everything he can to keep the lid on that evil.

Only Sunday News TV gig to watch is, without doubt is: FNC’s Sunday Morning Futures with Maria Bartiromo...period!!! All the other “Fake News” Sunday morning gigs are garbage, not worth listening to.

Worst of all, is Chris Wallace of FNC who will also be dancing at a Town Hall with “Pajama Boy” Pete Buttigeig (what a joke). Two birds of the feather dancing in the moonlight together. Now...ya gotta admit....that act is just mighty peachy...no?

I used to discount most conspiracy theories.

However, the Epstein murder woke me.

He was killed right before our eyes, the whole world watching, and had had an attempted suicide only a week or two before, and should have been under constant surveillance. Yet... He killed himself? With a paper blanket?

And the speed at which the story died was like... Lightening.

So nothing is unbelievable any longer.

After impeachment, what? An attempt at assassination?

14 posted on 01/26/2020 4:53:55 AM PST by Alas Babylon! (The prisons do not fill themselves. Get moving, Barr!)
[ Post Reply | Private Reply | To 8 | View Replies]
To: bray
Brilliant as usual,excellent explanation of what is going on.
No doubt the dems are upset about the result of the 2016 elections as Jim Jordan said some time ago.iTs here;
https://www.usatoday.com/story/opinion/2019/10/07/democrats-trying-impeach-president-donald-trump-abuse-power-editorials-debates/3903959002/
here's a clip:
Democrats trying to impeach President Trump are misusing their authority: Rep. Jim Jordan
Inquiry is shrouded in secrecy. Americans deserve more: Opposing view
Jim Jordan Opinion contributor
Democrats are trying to impeach President Donald Trump just 13 months before the American people go to the polls. They are doing it because they know they can’t remove President Trump otherwise.

It’s not for lack of trying.

Democrats put the nation through three years of the “Russia collusion” hoax, only for those allegations to completely unravel. Democrats have spent the past 10 months embarking on a series of partisan fishing expeditions, all in a concerted effort to take down a duly elected president. Now Democrats are accusing President Trump of orchestrating a quid pro quo to pressure the Ukrainian government.

Here’s the problem: Democrats are basing these latest allegations on a whistle blower complaint full of secondhand, hearsay information about a call with the Ukrainian president. The whistleblower was not on the call. A call transcript, released by President Trump, shows no quid pro quo of any kind. And as for the allegation of pressure, Ukrainian President Valdemar Zelensky said, “Nobody pushed me.”
.......................
Lots more but right now I'm into this also on FR:
https://www.freerepublic.com/focus/f-chat/3810739/posts

This looks huge.The corona virus originally thought to have started at an animal market in china is now thought to have been the result of chicom smuggling from chicoms working in canada.this is a huge story and many links involved.ZH has a big story on it as well here:
https://www.zerohedge.com/geopolitical/did-china-steal-coronavirus-canada-and-weaponize-it

As of last night looks like over 2,000 cases worldwide with over 50 deaths,no telling what the real numbers are since we just don't know. More as we move along.

You hit it out of the park as usual.

No doubt they are still at it covertly both in beijing and Wujan.

Rise Of China’s Biological Warfare Program
By GreatGameIndia -January 24, 2020| Last modified on January 26th, 2020 at 12:54 am,
China’s Biological Warfare Program is believed to be in an advanced stage that includes research and development, production and weaponization capabilities. Its current inventory is believed to include the full range of traditional chemical and biological agents with a wide variety of delivery systems including artillery rockets, aerial bombs, sprayers, and short-range ballistic missiles.

After impeachment, what? An attempt at assassination?
.....
I think that that’s all they’ve got left.