Trump vs. Schiff Is a Clash of One Titan: His committees report on impeachment is weak propaganda that doesnt even try to change minds.
Wall Street Journal ^ | December 6, 2019 | Holman W. Jenkins

Joe Biden is not just Mr. Trump’s present-day “political rival.” He is a former vice president who, when tasked to help clean up corruption in Ukraine, allowed his unqualified, drug-addict son to receive a lucrative board seat at a Ukrainian company under investigation for corruption.

These are subjects whose illegitimacy must be proved, not just assumed. And yet missing from the final report is any evidence that broaching them with the Ukrainians amounted to the crimes of bribery, extortion or campaign-law violation that Mr. Schiff once told us it did.

Instead, Mr. Schiff insinuates a motive he’s not prepared to state clearly, one designed as much to rescue his own reputation as slur Mr. Trump’s. This is his report’s reference to Mr. Trump as a president “elected in 2016 with the benefit of an unprecedented and sweeping campaign of election interference undertaken by Russia in his favor.”

In fact, Harvard’s Berkman Klein Center for Internet and Society painstakingly examined the social-media evidence and found Russia’s impact on the election to be trivial. More to the point, the authors concluded: “If the biggest win for Russian information operations is to disorient American political communications, then overstating the impact of those efforts actually helps consolidate their success.”

Bingo. Mr. Schiff may not be a Russian agent but he qualifies as a Kremlin asset in the sense that Hillary Clinton has been known to use the term. Example: Nothing in Mr. Trump’s words and actions, and nothing in the testimony of any witness, supported the claim with which Mr. Schiff began his hearings, that Mr. Trump asked Ukraine to “make up dirt, lots of it” on the Bidens.

Is this not the kind of shameless twisting of the facts the Kremlin’s own propagandists use to sow discord and bitterness?

Joe Biden was tasked to help clean up corruption in Ukraine?

Who tasked him, and when? Under what authority and with what specific mandate?

The thought of the Jarret administration “cleaning up corruption” anywhere is laughable.

“Mr. Trump as a president “elected in 2016 with the benefit of an unprecedented and sweeping campaign of election interference undertaken by Russia in his favor.-

And who was President and Vice President when this “sweeping campaign of election interference” allegedly occurred?

3 posted on 12/08/2019 8:11:44 AM PST by hanamizu
[ Post Reply | Private Reply | To 1 | View Replies]
To: karpov
The impeachment show is not a Schiff, Nadler, or Pelosi enterprise. It is a deep administrative, Intel community, State Department, Swamp operation.

Remember, Clinton transferred all arms and weapons sales from the D.O.D. to the State Department! The unelected branches of government are protecting 30 years of careful money laundering franchise. Trump exposes them all. They will stop Trump.

I believe there was an amusing quote from Biden some months ago. He was commenting about the 2016 presidential campaign, and the foreign interference going on at the time, and how Donald Trump benefited from it. Biden basically said: “That never would have happened when Barack and I were in office!!”

Ummmmmmm. They were in office.

6 posted on 12/08/2019 8:22:00 AM PST by PGalt (Past Peak Civilization?)
[ Post Reply | Private Reply | To 1 | View Replies]
To: karpov; All
Is this not the kind of shameless twisting of the facts the Kremlin’s own propagandists use to sow discord and bitterness?

Exactly. The Democrats, including the prior administration, and their media allies, are Russia assets by spreading the propaganda that Trump colluded or he's an agent of Putin because he held back aid to Ukraine. THIS derailing of Trump's ability to govern was Russia's goal all along. It's only BECAUSE TRUMP that he's been effective at all. A typical politician would've crumbled and I would say that includes Hillary.

Unless all of this is an intervention guided by God and Donald Trump is not a brilliant political genius but just a flawed man mentored by Billy Graham in the last years of his life whom God is using to accomplish his purpose.

In that case, the deep state has already lost.

If you want to talk “Russian asset”, contemplate what this entire “Impeachment” episode has done to Ukraine-US relations.

It’s been shouted to the rooftops that Ukraine is the most corrupt snake pit ever to grace the the planet. Why would ANY country give them another nickel in foreign or military aid? How can Congress appropriate funds for Ukraine until the corruption is sorted out? Putin must think it is Christmas.

Ukraine’s new President, an outsider elected on a reform platform, has been dragged into the underbelly of US politics. Seems like someone doesn’t want him to succeed. Thanks Adam Schiff, for undermining the chance for breaking the cycle of corruption.

US diplomacy has been dragged into the open, destroying an hope of candid exchanges. Why would any country trust the US not to broadcast every confidential discussion? Message: Don’t talk to a US President. US diplomacy has further been exposed to be the turf of corrupt players and absolute idiots. Putin knew that, but appreciates the Dems making sure everyone else knows it too.

Joe Biden was involved in Ukraine for only One Reason, Make sure Everybody GOT PAID!

This Schiff Report is one gigantic suppository for the Dem party. They will be drained down to their last POS.

11 posted on 12/08/2019 9:40:39 AM PST by Candor7 ((Obama Fascism)http://www.americanthinker.com/articles/2009/05/barack_obam_the_quintessentia_1.html)
[ Post Reply | Private Reply | To 1 | View Replies]
To: karpov
"In fact, Harvard’s Berkman Klein Center for Internet and Society painstakingly examined the social-media evidence and found Russia’s impact on the election to be trivial. More to the point, the authors concluded: “If the biggest win for Russian information operations is to disorient American political communications, then overstating the impact of those efforts actually helps consolidate their success.”

Thank you Holman for reminding me of that study. Could not recall who ran it.

Their Trump hate is showing what filth they are made of,many eyes have been opened.

Question to all: Supposedly Trump is accused of trying to dig up dirt on a person he is running against for president?

Isn’t Biden a POTENTIAL candidate as he has not been chosen by the DNC to run against Trump yet?

Trump is NOT running against Biden yet. For now Biden is a private citizen trying to get the nomination. 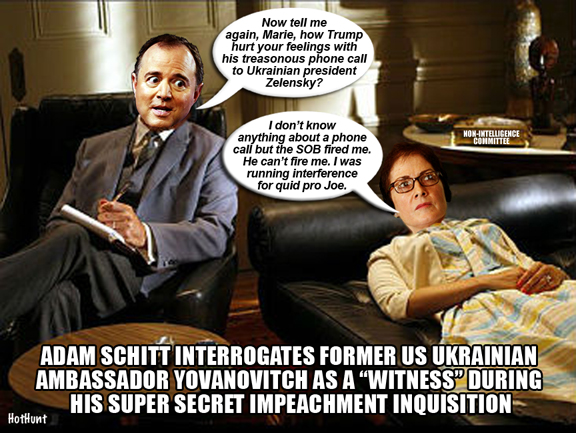