Looks that way. On today's Morning Joe, Scarborough dreamed of a scenario in which Fox News would turn against President Trump, thus bringing down his presidency. Scarborough analogized it to a "Cronkite moment." That was the time in 1968 when CBS News anchorman Walter Cronkite essentially declared the Vietnam War unwinnable. LBJ was reported to have said at the time, “if I’ve lost Cronkite, I’ve lost Middle America.” 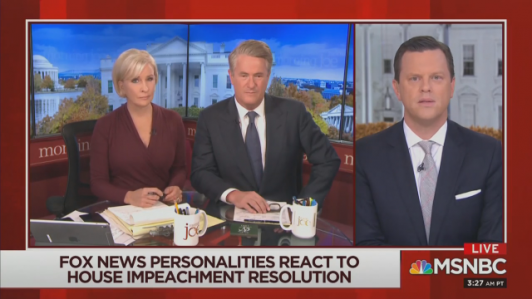 ... there’s only one problem. Trump actually has to do something really impeachable.

This deep-state generated political hysterics is not real and you all need to get back on your meds.

Cronkite was famous by lying about the Tet offensive.

US Citizens dream of a day MSNBC finally does real journalism instead of this daily regurgitation of Democrat Fascist Party propaganda.

For example. Here is what REAL journalism looks like.

Copy of the transcript.

LT Col Clown boy, the Democrat “star witness” this week admitted in his testimony the transcript is complete and accurate.His boss just testified today there is nothing at all illegal or improper in the call.

In any sane world this kills the Democrat Fascist clown show in the US House dead. But the DC Swamp, and their mindless toadies in the Fake News, don’t live in a sane world anymore.

It now turns out this “impeachment” scam is all about the DC Swamp criminals trying to divert attention off the AG current criminal investigation. The “whistle blower” is one of the prime agents in the original “Russian collusion” fraud.
No wonder they were all panicked by the Ukrainian call, they knew the noose was being slipped over their heads.

Remember: This guy was once a Republican congressman from the South.

Dream on Joe. There will never be another “Cronkite moment”.

8 posted on 11/01/2019 9:24:41 AM PDT by goldstategop (In Memory Of A Dearly Beloved Friend Who Lives In My Heart Forever)
[ Post Reply | Private Reply | To 1 | View Replies]
To: governsleastgovernsbest
Except nobody give a flying s*** what any of the metropoloids at Fox think.

They don't even break any news anyway - just a bunch of jackasses giving their opinions what we've heard on the internet.

the fantasy here is that Fox News is the only thing propping up Trump. I don’t have cable, never watch any cable news or network news, yet I am with Trump all the way.

What a dork. People on the right don’t accept their political opinions from the doofi on their televisions. Leftists get all their opinions from talking head drones and late night comedians.

Cronkite was famous by lying about the Tet offensive.


We live in a post Dan Rather world now. None of them can single handedly do that. The internet keeps them at least relatively honest.

16 posted on 11/01/2019 9:37:01 AM PDT by al baby (Hi Mom Hi Dad)
[ Post Reply | Private Reply | To 14 | View Replies]
To: governsleastgovernsbest
Scarborough analogized it to a "Cronkite moment." That was the time in 1968 when CBS News anchorman Walter Cronkite essentially declared the Vietnam War unwinnable.

Which was fake news.

The US had just won the Battle of the Tet Offensive.

The Viet Cong would never again be a fighting force.

It was a great victory.

The commie Cronkite saw an opportunity for a propaganda coup.

Tet was an effort by the North to take the South in one huge offensive. It was a gamble that they lost in a huge way. But the sheer audacity of the attack was so unexpected that it allowed the press to make it appear as though the North had taken stolen the momentum of the war. While the truth was just the opposite.

17 posted on 11/01/2019 9:39:25 AM PDT by Pontiac (The welfare state must fail because it is contrary to human nature and diminishes the human spirit)
[ Post Reply | Private Reply | To 1 | View Replies]
To: governsleastgovernsbest

Fox News IS turning against Trump, thanks to Murdoch’s liberal kids and Paul Ryan.

However, we quit listening to them some time ago.

No I must of screwed up posting the link.