The newly rebellious senator has become an outspoken dissident in Trump’s Republican Party, just in time for the president’s impeachment trial.....

Mitt Romney is leaning forward in his chair, his eyes flashing, his voice sharp. It’s a strange look for the 72-year-old senator, who typically affects a measured, somber tone when discussing Donald Trump’s various moral deficiencies. But after weeks of escalating combat with the president—over Ukraine, and China, and Syria, and impeachment—the gentleman from Utah suddenly appears ready to unload.

TOPICS: Editorial; News/Current Events; Politics/Elections; US: Georgia; US: Massachusetts; US: Michigan; US: New York; US: Utah
KEYWORDS: ashleyfeinberg; backstabberromney; benedictromney; billkristol; carpetbaggerromney; clickbait; deepstate; georgia; gopestablishment; impeachment; liarromney; marcorubio; massachusetts; mckaycoppin; michigan; mittens; mittwit; nevertrustromney; newtgingrich; newyork; obama; obamalegacy; peach45; peachfotyfi; pierredelecto; rino; rinos; rmoney; romney; romney4soros; romneycare; romneymarriage; rudygiuliani; slate; tds; theatlantic; tnr; traitor; trump; twitter; utah; willard Navigation: use the links below to view more comments.
first 1-20, 21-24 next last
Right on cue, Mitt Romney proves he is more than willing to stick a knife in Trump's back (the guy he begged to endorse him) in exchange for puff pieces in all the influential Establishment publications. I have to say that Mittens & his virtue signaling makes me sick to my stomach even more than the most rotten scoundrels in the Dem party; at least the Dems are honest about their motivations. Romney is slavishly licking-the-boots of the same people who absolutely trashed him in 2012 (which, in retrospect, may have been justified).

This has to stop. Romney is just the most obvious of the rat ba$tards; we all know there are more waiting in the wings. Facts aside, it seems certain that Trump will be impeached in the House. Like Obamacare, it will be a razor thin vote, but they will do it. Pelosi would not have come this far just to back down. And I'm sure a few Rs will help her. The Senate is where the real battle will take place.

Given this, I'm going to make the following clear to ALL the R senators and reps in my state:

1. If Trump is removed, I am DONE with the Republican party. Not just for a few years, but likely for the rest of my life. Trump is the only one among them who FIGHTS. If they betray him, they will have shown that they are really no different from the Dems.

2. If any of them personally votes for impeachment and/or removal, I will vote for their opponent. Not just in a primary, but in a general election. Frankly, if they show themselves to be traitors, I won't much care who that opponent is. My sole goal will be to get the traitors out of office.

3. I will use ALL my influence to get family, friends and right-leaning colleagues to do the same.

We must make clear that there are consequences for being a turncoat. Speaking with a clear, firm and merciless voice is the only way to stop this nonsense.

Thank you. I fully agree and will do the same.

Wow...mittens was practically mute during bammy’s regime. Now, he decides to speak up.

Readily available as critic at large, but seeming incapable of walking the talk.

Romney is sick as hell. This jackass is a Mormon? God and Country? I thought this clan supports the President, law and order, and the citizens. Citizens voted, where in the hell is Romney?

A good portion of these a-holes are simply contrarians who make decisions by poll numbers,advisors and whore money.

Bush League Republicans MUST become extinct before the Republic does.

Is ihis a case of the ‘peter principal’ where a person rises to his level of incompetence?

Full of good intentions, but don’t know how to be a senator. The following is excerpted with permission from the book Our Ageless Constitution [p.51]

“…one must understand something of the spirit of the people who had been experimenting successfully with liberty for over 165 years when the Constitution was framed.”

From 1620, the settlers of America were motivated by a passion for liberty. British statesman Edmund Burke, in 1775, traced the astounding economic development and the unparalleled spirit of liberty of the Americans when he appealed to Parliament for conciliation with its colonies (See: Part VIII – Burke Speech on Conciliation). He said: “…it is the spirit that has made the country…

Examining some of the reasons for the spirit, he continued:

“Religion, always a principle of energy, in this new people is no way worn out or impaired; and their mode of professing it is also one main cause of this free spirit…. This is a persuasion not only favourable to liberty, but built upon it…. This religion, under a variety of denominations agreeing in nothing but in the communion of the spirit of liberty, is predominant in most of the northern provinces…. The Southern colonies are much more strongly and with a higher and more stubborn spirit attached to liberty than those to the northward.”

Burke’s comments shed remarkable light on the American spirit exhibiting itself, even to those in foreign lands, by the time of the American Revolution. His observations are significant for they reveal something important about a people already established in the eyes of the world as lovers of ordered liberty and participants in outstanding progress. Burke described what he called the “temper and character” of the people, saying, “In this character of the Americans a love of freedom is the predominating feature which marks and distinguishes the whole….” Among the reasons for their “untractable spirit,” he said, was their “education.”

“In other countries the people … judge of an ill principle in government only by an actual grievance; here they anticipate the evil and judge of the pressure of the grievance by the badness of the principle.”

In other words, Burke observed that in most of the world, people could only begin to understand an oppressive or bad idea in government after it had been employed to harm them. Americans were different, he said, for they were taught to understand the principles--ideas and principles inherent in human nature, both good and bad--before they could be used to oppress them. Possessing such understanding, he said, Americans could detect “misgovernment at a distance and snuff the approach of tyranny in every tainted breeze.” James Madison later expressed it this way:

“The freemen of America did not wait till usurped power had strengthened itself by exercise, and entangled the question in precedents. They saw all the consequences in the principle, and they avoided the consequences by denying the principle. We revere this lesson too much, soon to forget it.”

It is clear that Americans were educated in the ideas of liberty for several generations. As late as 1830, Frenchman Alexis de Tocqueville observed among the general population of America the same high degree of education and understanding of basic principles. “It cannot be doubted that in the United States the instruction of the people powerfully contributes to the support of the democratic republic….” Even in outlying areas, he said, the American “will inform you what his rights are and by what means he exercises them….”

Such understanding was the primary purpose of the education provided to early generations. As Thomas Jefferson stated:

“The most effectual [effective] means of preventing the perversion of power into tyranny are to illuminate …the minds of the people at large, and more especially to give them knowledge of those facts, which history exhibits, that possessed thereby of the experience of other ages and countries, they may be enabled to know ambition under all its shapes, and prompt to exert their natural powers to defeat its purposes.”

According to Jefferson, the people’s study of history would “qualify them as judges of the actions and designs of men; it will enable them to know ambition under every disguise it may assume; and knowing it to defeat its views.”

By 1787, after having endured a long and traumatic struggle for independence and freedom from a government that had become increasingly abusive and oppressive, their understanding of the nature of mankind as revealed through history and their examination of ideas and principles necessary to liberty had equipped them to undertake the establishment of a government for a free people – a government having its very foundation set in the knowledge that the rights and liberty of people are endowed by their Creator and are, therefore, unalienable.

With this concept and these principles firmly fixed in their minds, and with a “stubborn spirit attached to liberty” they were ready, in 1787, to prepare a Constitution for the United States of America.

David Stedman is the retired Chairman of Stedman Corporation. Stedman was a founder of the National Center for America’s Founding Documents and the National Foundation for the Study of Religion and Economics. Stedman is Co-Editor with LaVaughn G. Lewis of Our Ageless Constitution and Rediscovering the Ideas of Liberty. Stedman holds earned degrees from Duke, Harvard, and Georgetown Universities and is a Distinguished Alumnus of Duke University.

LaVaughn G. Lewis is a former high school teacher. She served at the Stedman Corporation as Assistant to the Chairman and as researcher and writer. She is Co-Editor with W. David Stedman for "Our Ageless Constitution" and "Rediscovering the Ideas of Liberty," and is a graduate of Pfeiffer University.

The writer of that article needed to wipe their mouth and gargle after writing this...

The same folks who branded this idiot a danger and the personification of evil during his run for the presidency are now slobbering all over him.

Romney is a joke, and a lone weed in a field of green. If not for fellow cult-members in Utah, he’d be a forgotten stain on the sidewalk of life.

Here’s hoping he can be primaried on the next go-around. I can’t imagine he has much support remaining, even among the magic underwear types.

I’m starting with a letter to my rino governor.

He's never been near it!

14 posted on 10/20/2019 11:15:03 AM PDT by G Larry (There is no great virtue in bargaining with the Devil)
[ Post Reply | Private Reply | To 1 | View Replies]
To: rbg81
Mitt Romney is leaning forward in his chair, his eyes flashing, his voice sharp. It’s a strange look for the 72-year-old senator, who typically affects a measured, somber tone when discussing Donald Trump’s various moral deficiencies. But after weeks of escalating combat with the president—over Ukraine, and China, and Syria, and impeachment—the gentleman from Utah suddenly appears ready to unload.Sounds like Willard is having a really tough time with his constipation problem.
15 posted on 10/20/2019 11:24:00 AM PDT by The_Media_never_lie (Please, oh pretty please let Crazy Uncle Joe Biden be the nominee.)
[ Post Reply | Private Reply | To 1 | View Replies]
To: rbg81 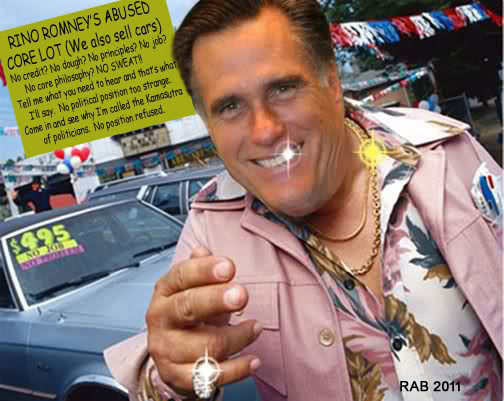 Not only did he fail to get the nomination he wanted he lost his mind. His family should demand he seeks mental health care.

No one ever asks the rank and file what they think of this traitor. No polls on Romney.

Am I the only one who believes it’s about time we stop letting the back stabber traitor slide with threats of “taking him down when he runs again?” There should be a gaggle of Freepers parked in front of his house and his office, making him very nervous. I am sick of him.