Schiff, 59, has been one of the driving forces behind the impeachment inquiry that began last month after an unnamed CIA official filed a whistleblower complaint alleging wrongdoing by the president during his phone call with Zelensky. However, Schiff's ties to the whisteblower have given political opponents, including Trump, ammunition to question his actions.

"We have discovered in short order not only the contents of that call, but also the preparatory work that went into the call. The effort to condition something the Ukrainian president deeply sought, and that was a meeting with the president to establish that this new president of Ukraine had a powerful patron in the president of the United States that was of vital importance to Ukraine, was being conditioned on digging up dirt on the Bidens," Schiff stated on Sunday's episode of CBS's Face The Nation. 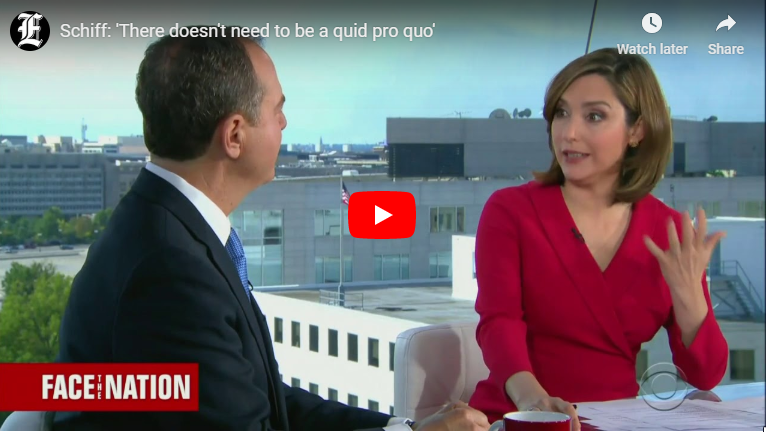 TOPICS: News/Current Events
KEYWORDS: couppeachment; fakeimpeachment; impeachmentfarce; schiffcorrupt; schiffinterview; trumpimpeachment Navigation: use the links below to view more comments.
first 1-20, 21-40 next last
TRANSLATION: "There doesn't even need to be a crime. Just the fact that we hate him so much is sufficient."
1 posted on 10/13/2019 9:57:44 AM PDT by E. Pluribus Unum
[ Post Reply | Private Reply | View Replies]
To: E. Pluribus Unum

When are they going to start talking about Schiff’s 16 visits to the Meth Guy Buck in LA? 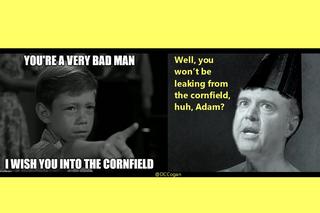 I think either way the democrats know they were going to lose. This is their hail mary end zone pass, but they need 3 touchdowns to win. All in vane but still they need something to help prevent their leftists from leaving them.

The crime here is that VP Biden was President Obama’s point man on the Ukraine and he used his power of office to enrich himself and his family. Same as he did in China and evidence is gathering that there are other cases as well.

WE as a people have come a long way since the Spanish Inquisition, huh?

Face your accusers, a right? HAAA!!!!

For Dems , it is now a privilege, and in this case.. Ironically, white man privilege in the form of Schifty setting any rules or standards he so chooses to set.

The American gubamint has crushed&torched many of its own citizens in the name of justice and public safety and far less, why not the President for just doing his job?

The public doesn’t care and Mitch already said it’s DEAD in the senate besides a show trial.

And YES I believe him because VERY FEW Rs want to lose their cushy lots of $$$ jobs.

He’s right. Impeachment is political and anything goes if you have the votes, period.

It’s foolish to argue with them.

The media and DNC destroyed, much to my horror, the attorney/client privilege, and now

OK, if there doesn’t need to be a Quid Pro Quo then what does it need to be? Just how low a bar are you going to set Adam? Hey, remember Harry Reid and the nuclear option? If you set the bar so low a snail won’t trip over it it might come back and bite you if your guy ever gets elected. Do it.

What this implies is that:

IMPEACHABLE: “Could you look into that Joe Biden business for me”

NOT IMPEACHABLE: “Could you look into that Jim Robinson business for me?

If so then simply running for office carries with it an immunity that protects you from any mention of your name to foreign leaders in connection with discussions of corruption.

Sorry, Adam, I don’t think so. And after Americans go to vote on this issue next year you will agree with me.

So true. There doesn’t need to be a quid pro quo, but if there wasn’t, there could have been and that’s enough to impeach the president. It is clearly a violation of the Constitution for a foreign government to seek good relations with the United States, and Donald Trump has betrayed his office and his oath of office for wanting good relations with a foreign country.

What an utter fool. And I am being generous.

IOW. I got nothing

Impeachment will be their next-to-last "hail mary" to stop Trump.

The last "hail mary" will be an "event" similar to Nov 22, 1963 when another president vowed to destroy the C_A.

"I will splinter the CIA into a thousand pieces and scatter it into the winds."

Politely, tell him to resign.

Trump’s desire to be re-elected is an impeachable offense to these spider-like squirmy, lying, disgusting, slimy ghouls.

> “”We have discovered in short order not only the contents of that call, but also the preparatory work that went into the call. The effort to condition something the Ukrainian president deeply sought, and that was a meeting with the president to establish that this new president of Ukraine had a powerful patron in the president of the United States that was of vital importance to Ukraine, was being conditioned on digging up dirt on the Bidens,” Schiff stated on Sunday’s episode of CBS’s Face The Nation.”

What happened to the ‘parody’?