RUSH: I think our last caller had a point about the Democrats. I think they are eager, and that’s why I want to reiterate: They want to get this going by Thanksgiving. They want to get something going that can say, “Trump is being impeached,” and they want to beat whatever Barr and Durham are working on.

My guess is - and I don’t know what Barr’s gonna come up with. I have no idea what it’s gonna produce. But the Democrats can’t take any chances, so they want to get going and want to get this up to speed so that when the Barr results hit, they can say, “Ah, don’t pay any attention to that. They’re just trying to distract you from our official impeachment inquiry here.” I told you way back when that we’re in a race. We are in a race between the forces of good versus the forces of evil on the left.

We’re in a race to get to where we’re going before they do, and they are looking at the same thing - and this is it.

RUSH: Audio sound bite number 24. Eleanor Holmes Norton, as the Reverend Jackson pronounces her name, Eleanor Holmes Norton. She actually is a delegate. She doesn’t get a vote. She’s in the House, but since D.C. is not a state, it doesn’t have any official representation. She was on CNN to describe nevertheless what the Democrat strategery here with all this, and this is gonna sound very familiar to you.

NORTON: We do want to do this expeditiously. We want to get to the real business of the House of Representatives.

NORTON: Here we’ve taken the House ten months ago. We’re not even talking about climate change —

NORTON: — and gun control, and we want to get back to that. And the only way to get back to those critical issues, which are responsible for our taking control of the House, is to clear away this impeachment matter.

RUSH: See? See? Folks, I knew it was the right thing to do, call these people out on ignoring voters, not interested at all in helping people, taking taxpayer dollars and spending it on their own personal political projects like impeaching Trump. And so now Pelosi is in Seattle today. What’s Pelosi talking about? She’s talking about how House is working hard on bringing down drug prices! They’re not working a minute on it!

Here comes Eleanor Holmes Norton saying that it’s time to get Trump impeached, sweep that out of the way so we can get back to doing what we were elected to do. They damn well know that they are walking along a precipice here. But the key is, “We want to get this done fast! We want to get this done fast,” and here’s Pelosi, by the way. This is not about health care drug prices, but in Seattle at the Harborview Medical Center, she got a question from a sycophant Democrat in the media. “What is your response to the White House blocking Ambassador Sondland from testifying before Congress today?”

PELOSI: Your question is specifically about the ambassador being blocked from testifying. Now, he said to his lawyers that he’s fully prepared to come to testify. There will be a subpoena issued for him to come testify. The president is obstructing - obstructing Congress from getting the facts that we need. It is an abuse of power for him to act in this way, and that is - that is one of the reasons that we have an impeachment inquiry.

RUSH: She’s out there at this hospital, she’s at the Harborview Medical Center, she’s trying to convince everybody that the House Democrats are indeed working on lowering prescription drug prices and working on health care. And so it’s time for her cohorts in the media to help that along and they start asking about the ambassador being blocked. So she makes it clear, well, yeah, yeah, we’re gonna subpoena the guy. Trump’s obstructing Congress.

I’m telling you this is gonna be an article of impeachment: Trump covering up, Trump obstructing Congress, what have you. And then they’ll have an article about Ukraine, maybe. I think they probably want to sweep Ukraine off the front page here. The whistleblower thing’s blown up on them despite their still trying to sell it.

But by ignoring Ukraine it keeps Biden and his kid and their corruption out of the impeachment story. So two different source here. Eleanor Holmes Norton and Pelosi. So the strategy is pretty clear what they’re aiming for. And all will be known on Monday when the Congress gets back into action.

If it ain’t out by now, it won’t be out before Christmas. Trump needs to get them both in a room and tell them “if your goal is to see how your foot dragging will tear the country apart, then I’m not going to wait on you and declassify the world! And when they ask me why I did it, I’m going to tell them that you are purposely delaying information and are part of the deep state! Who you think the people will believe? Me or the Democraps & MSNBC?”
Then give these 2 idiots 10 days to wrap it up!

President Trump just threw a wrench into that goal.

By refusing to entertain the “Kangaroo Court” the democrats have concocted they will not be able to bull rush this farce through. If thy wish to continue down this path they will have to take it to the courts.

They’d be lucky to get an initial hearing before the end of this month. Never mind getting any final word from the court system.

President Trump has continually kept them off balance and then thwarted their plots against him every step of the way.

And Trump wants them to take an impeachment vote by Halloween.

He’s eggin’ ‘em on, insisting they accelerate the matter.

“If it ain’t out by now, it won’t be out before Christmas.”
—
Yup. I wouldn’t get my hopes up that anything will ever come of it.

That’s rich coming from a bunch of turkeys.

7 posted on 10/08/2019 7:09:53 PM PDT by HighSierra5
[ Post Reply | Private Reply | To 1 | View Replies]
To: ocrp1982
refusing to entertain the “Kangaroo Court” That's how POTUS is going to burn that to the ground. He's going to beat them over their heads with it. Have a floor vote and make it official or else go down in flames while at the helm of a malicious extra-legal inquisition because they are assuming powers they don't have and making crap up as they go along, the most blatant being their trickery at denying basic process that an individual with a traffic ticket would expect from a municipal court.
8 posted on 10/08/2019 7:14:12 PM PDT by lapsus calami (What's that stink? Code Pink ! ! And their buddy Murtha, too!)
[ Post Reply | Private Reply | To 3 | View Replies]
To: ocrp1982

Well they could do it right and hold a vote on an impeachment resolution but that would mean giving Trump due process and the Republicans subpoena power. Can’t do that. 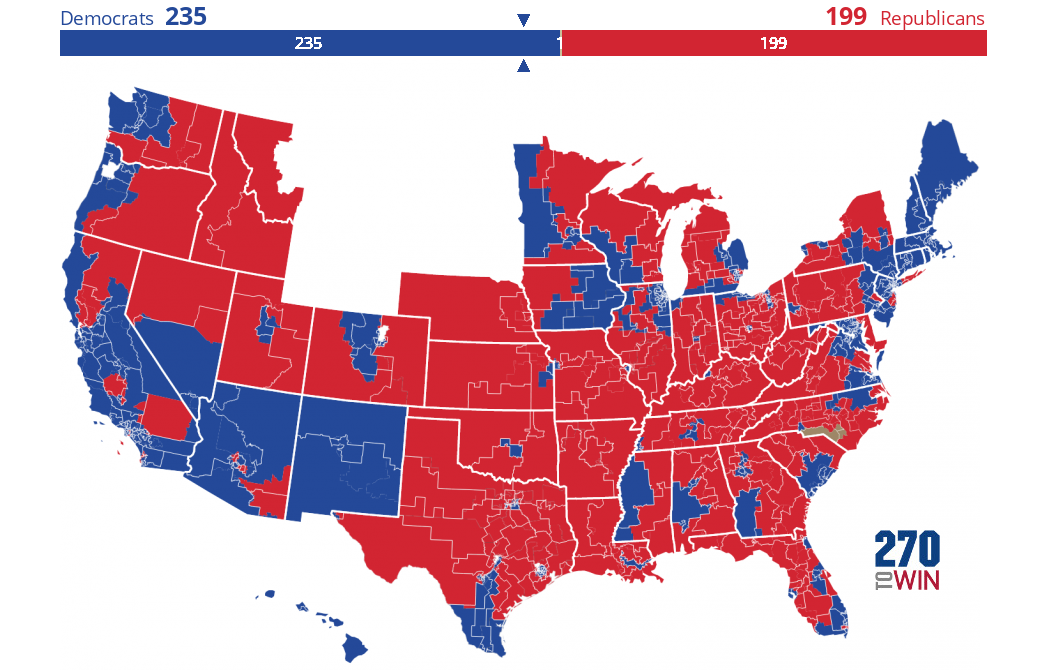 The RED areas represent the American people who are being disenfranchised from the impeachment process.

The only thing they can do now is a quickie impeachment resolution based on NOTHING but “obstruction of Congress” due to PDJT insisting on the minimal due process of law that’s given to the vilest of accused murderers and rapists. Not likely to fly with the courts or the people. After all, if the President isn’t entitled to due process, who else is???

Limbaugh isn't the only one that thinks this is why the moonbats have gone into an impeachment frenzy.

I don't think it will work out for them even if they do start a real impeachment hearing.

Agreed. But, that’s the last thing they want. This farce has been by (piss poor) design meant to avoid a floor vote of impeachment at all costs.

They concocted this impeachment model to try to impeach without a floor vote to give those dems in Trump territory cover.

Today, President Trump blew that scheme right out of the water.

If the Barr~Durham report is not accompanied by indictments, what good is it other than shelf filler?

And that will be that.

Wow what a great impeachment for ignoring a letter. That’s the high crime? Ignoring a letter? Please. I want more Nadler. He really makes their case.

Their big problem is they can’t constitutionally impeach without either one or two floor votes. That’s either the one vote no due process quickie I’ve mentioned or the conventional due process two vote method where the first only authorizes commencement of the due process that will lead to the second on issuance of one or more articles of impeachment. The fatal flaw of the second method, from their standpoint, is it will allow PDJT to make his case and, where that’s happened in these kangaroo court proceedings, their cases have always disintegrated, as in the Kavanaugh confirmation.

I am so angry that Democrats have come up with one thing after another since even before the election. What happened to the concept of fighting hard to win an election and if you loose let the winning party govern.

I see all future elections as resolving nothing. That system is going to tear this country apart. I don’t see any way of putting the election genie back in the bottle, ever.

Maybe we'll get that Horowitz report.....someday....

But then, Barr will "refuse" to prosecute any members of the Deep State. 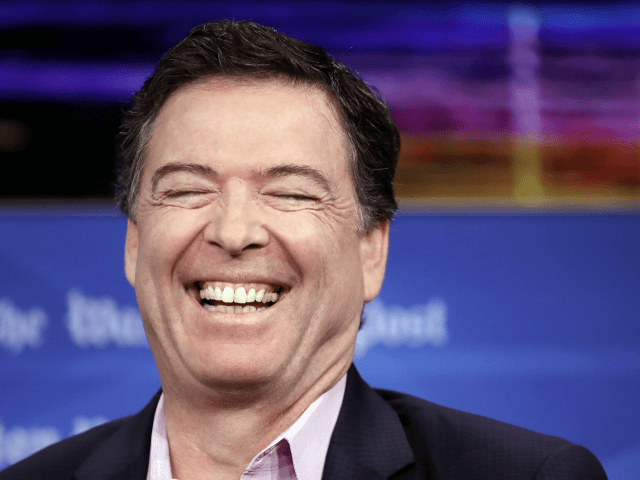