Among the multitude of migrants waiting in Mexico to get asylum in the United States are thousands of Africans boldly demanding passage into the country. They are far more coordinated than their Central American caravan counterparts and have formed an official organization to spread their message and advocate on their behalf. The group accuses Mexican authorities of discrimination and racism and is ordering Mexico to grant visas that allow them to continue their trek north to seek “protection” in America.

For about three months the Africans have been holed up in Tapachula, in the southeast Mexican state of Chiapas bordering Guatemala. They traveled for two months and crossed eight countries to reach Mexico, they assert in a mission statement that outlines their suffering as well as their demands. “We have climbed mountains and valleys,” the document reads. “We have crossed rivers with strong current. We have slept in the middle of the mud. We have gone hungry and drank rainwater to survive. We have seen bodies of migrant brothers on the road, dead of exhaustion, or drowned in the rivers. The jungle is populated by wild animals, snakes and poisonous insects. In that territory there are also criminals who assault people, who rape girls and women, killing those who try to resist. Many of us have lost all our belongings, including our official documents. We have gone through extremely dangerous cities and towns. We had to hide. We have suffered extortion and threats by authorities in Panama, Nicaragua, Honduras, Guatemala and Mexico.”

These people are obnoxious and crazy.

I would not let them in. We do not need people like that.

Your terrible sob story is not our problem.

its the Basic UN Right for unlimited access to white people.

“we have raped, we have killed, we have used up all the local resources. So let us in.”

Reminds me of the protester who climbed the statue of liberty:

8 posted on 09/23/2019 8:44:55 PM PDT by Mr. N. Wolfe
[ Post Reply | Private Reply | To 1 | View Replies]
To: Tolerance Sucks Rocks
...One more demand, the Africans want assurances from Mexican law enforcement that there will be no “reprisals” when they conduct violent protests

After the Rats regain the WH , they are going to allow the next wave of illegals into America - from Africa . Goal is obvious - to unwhiten the USA . Whites , with their lowbirth date and interracial marriage , are co-conspirators .

We ‘demand’ that you follow the law and enter legally, if at all. You can’t just bogard your way into our country without expecting some push back. Your country would throw any American into crocodile infested rivers if we suddenly popped up ‘demanding’ favors.

The answer is no.

Now go home the same way you got to Mexico.

“These people are obnoxious and crazy’’. Crazier than sh!t house rats. “Demand’’. F them. Immigration to The United States is a privilege not right.

“Your terrible sob story is not our problem.”

What sob story? They are African people that traveled to South America from we don’t know where, to enter country after country in Central America demanding hand outs so they can travel further north to request asylum in the US from we don’t know where or if they even need it and qualify for it. So far they haven’t established they are in peril anywhere but because of their own actions. And they will be crossing Mexico that has an asylum program they choose not to partake.

So they don’t want asylum, they want another hand out because the US can provide a better living condition than Mexico can. And that’s not asylum, that’s an attempt of immigration through lying and thus trespassing. I don’t care what the Central American countries do with them. But as they don’t wish asylum, but wish to immigrate to the US, they will have to wait their turn in line and be chosen to enter. And that line is pretty long right now. Smoke’um if you got’um.

17 posted on 09/23/2019 9:44:24 PM PDT by Redwood71
[ Post Reply | Private Reply | To 4 | View Replies]
To: Tolerance Sucks Rocks
The jungle is populated by wild animals, snakes and poisonous insects. In that territory there are also criminals who assault people, who rape girls and women, killing those who try to resist. Many of us have lost all our belongings, including our official documents.

Cost money to keep people in prison ... lot cheaper to send them all to the United States.... I'm assuming these people didn't swim across the ocean, right?

Reminds me of the “migrant” trying to shake down two Polish truckers. 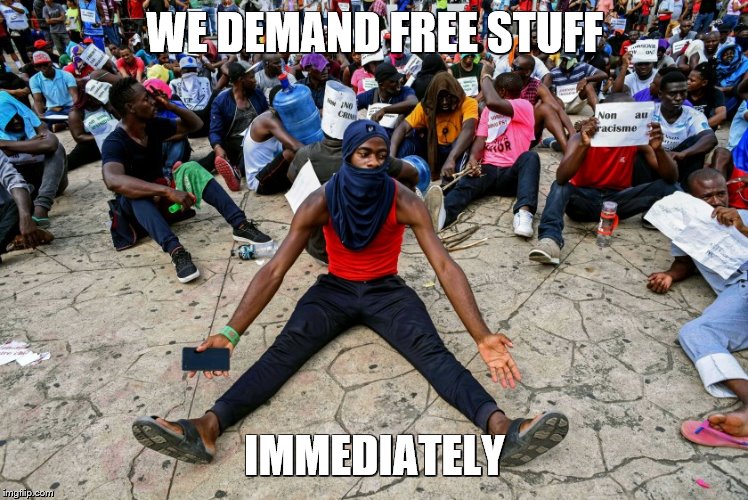