President Donald Trump is calling on the Federal Reserve to cut interest rates by at least a full percentage point "over a fairly short period of time," saying that such an action would make the U.S. economy even better and would also "greatly and quickly" enhance the global economy.

In two tweets Monday, Trump kept up his pressure on the Fed and its chairman Jerome Powell, saying the U.S. economy was strong "despite the horrendous lack of vision by Jay Powell and the Fed."

Powell is Trump's hand-picked choice for the top Fed job.

He said Democrats were trying to "will" the economy to deteriorate ahead of the 2020 election.

Trump administration officials in recent days have sought to calm worries about a potential U.S. recession that were heightened by last week's steep stock-market decline.

The Fed on July 31 cut its key policy rate for the first time in more than a decade, reducing it by a quarter-point to a range of 2% to 2.25%. It cited a number of "uncertainties" that were threatening the country's decade-long expansion, from Trump's trade battles to slowing global growth.

Economists and investors will be closely watching a speech Powell will give Friday at the Fed's annual conference in Jackson Hole, Wyo., for signals of whether the central bank is prepared to embark on a series of rate cuts to energize the U.S. economy.

Over the past year, Trump has kept up a steady drumbeat of attacks on Powell.

In addition to calling for the Fed to cut rates by a full percentage point, Trump also said the central bank should consider supplying "quantitative easing" as well, the term economists use to describe the Fed's efforts to restart economic growth over the 2007-2009 recession by buying bonds to lower long-term interest rates.

Why does that fed buying bonds lower interest rates.

President Donald Trump is calling on the Federal Reserve to cut interest rates by at least a full percentage point “over a fairly short period of time,” saying that such an action would make the U.S. economy even better and would also “greatly and quickly” enhance the global economy.

That would be about right.

The Federal Reserve is manipulating short term rates to be about a point higher than what the market would charge.

The borrower is slave to the lender

It is my understanding they are not correlated with each other.

When the Fed buys bonds it is to create wealth or pump money into the economy.

Wealth or new money is created through loans. This is why credit is so important.

4 posted on 08/19/2019 10:42:02 AM PDT by Enlightened1
[ Post Reply | Private Reply | To 2 | View Replies]
To: Enlightened1
Every President wants low interest rates to reduce payments on the enormous deficits. 2% is pretty low by historical standards. Obama enjoyed ridiculously low interest rates near zero because he was a screw up. Trump has the fed chief he chose a year and half ago. :-) 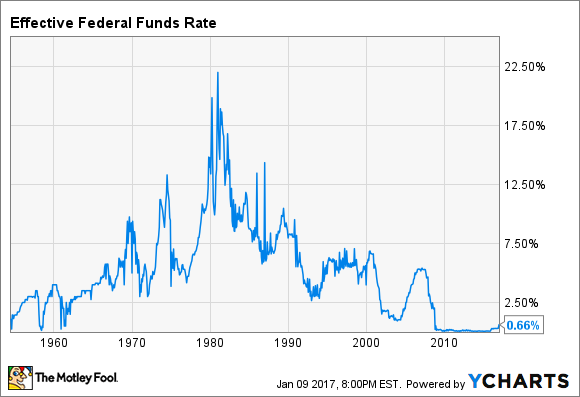 Every President wants low interest rates to reduce payments on the enormous deficits. 2% is pretty low by historical standards.

Yes, but what matters is what the market would charge. These days that’s lower than 2%.

The economy has been booming, but they are cutting interest rates when we are at historic lows. This is not good.

I bought a house right around that time at 14% interest. It seemed like a good idea at the time.

Economic growth does not cause inflation.

Our high-vs-other-developed-coountries’ interest rate has foreigners buying US Treasuries rather than their own, driving the yields down. This triggered the recent Recession alarm now regarded as false due to foreign purchasing of treasuries.

Our currency, tresuries and stocks are globally-accessible trading assets. It’s time for the Fed to realize this and set policies accordingly so the US doesn’t continue to get ripped off by the rest of the world. But hey, that’s the Left’s sticht.

cost of sale (interest rate govt has to pay) goes down as there are more bidders/buyers... the bidders are willing to purchase the bonds (IOUs) for (at) a lower interest rate

“I bought a house right around that time at 14% interest. It seemed like a good idea at the time.”

In 1982 mortgage rates were about 17% or so. There was a deal on some new houses and they offered 13% interest rates which seemed like quite a deal at the time so I bought my first house. :-)

It really sucks to not be able to make any money on savings accounts anymore. And while inflation continues it steady slow climb. No wonder people don’t save money anymore.

You do know that there are other was to invest besides savings accounts. SA’s have always been the worst investment vehicles.

“It cited a number of “uncertainties” that were threatening the country’s decade-long expansion, from Trump’s trade battles to slowing global growth.”

Does Trump hate savers? After inflation, we’re already earning negative interest rates on our bank accounts, while the prices of the things we are saving for are increasing.

??? What the hell?? Cutting interest rates willy nilly is not exactly great economic theory. Wish Trump would keep his mouth shut on this - or at least do this behind the scenes.

The law of Supply and demand. When the Fed signals a willingness to pay above-market prices for bonds, the increased demand triggers an overall hike in trading price for bonds.

The same would be true if the government entered the housing market and began purchasing large numbers of homes at inflated prices - housing prices would rise.

The way this relates to interest rates is that bonds always trade at a discount of what they will be worth at maturity, based on the time value of money. The amount of discount is what determines interest rates.

For example, if traders will pay $90k today for a 3 year bond that will be worth $100k at maturity, that $10k discount implies an annual interest rate of 3.58%. If the government enters the bond market and drives the trading price of that bond up to $93k, the discount is now only $7K, which implies an interest rate of 2.45%.

So the Fed has lowered interest rates.

A couple of things...

Credit card companies tie the rate they charge to the Fed rate. I think a quick check of the historical data with show you that most credit cards are charging a higher “X number of points above the Fed rate” than ever before in history.

I remember my parents having an 18% credit card when their mortgage was 12%. All things being equal, my mortgage is at 3%, so my credit cards should be at about 9%. My lowest is 13% and I have some that I do not use that would charge me in the mid-20’s. Banks are taking advantage of low Fed rates and making a mint, but should the Fed lose it’s mind and raise the rate to say 4% (which would still be historically low) nearly all credit card rates would be in the high teens or twenties. Consumer spending would come to a grinding halt.

Second...I am pretty sure the Fed is (mostly) ignoring Trump and Trump knows this. Should we slip into recession, this gives him cover. “I told them to lower the rates” will be his clarion call should we have some bad GDP numbers.

Third...IF we should possibly slip into recession, it will be because of turmoil caused by companies moving their production out of China. I have received five emails today alone from suppliers warning about supply chain issues resulting from manufacturers leaving China. This is going to be a long term win, but in the short term it could result in a temporary rise in prices as supplies get low.

Also remember, NO ONE in Washington is Trump’s friend. He may have allies of convenience, but at the first sign of trouble he will be alone. The Wall Street money people are happy when they are making money, but should there be the slightest disruption, they will throw Trump under the bus. The next 15 months will be an unending stream of exaggerated claims of impending financial doom, all of which will be Trump’s fault. Good-bye “Russian collusion”. Hello “everything is Trump’s fault.”