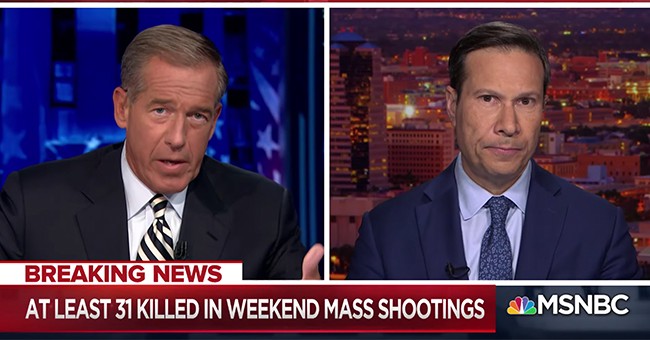 What's the point at which rhetoric forces action? When do words become incitement? At what point do political attacks get so reckless and unhinged that you can no longer heal the divide they create with politics? It's hard to know exactly, but the left is getting very close. Take, for example, this exchange on MSNBC, in which frequent guest Malcolm Nance accuses the president of the United States of sending secret messages to neo-Nazis:

"These people feel that they are the foot soldiers and executors of the disenfranchisement that the white race is feeling, and Donald Trump is giving them subliminal orders in their head," Nance said.

Subliminal orders? Whatever Trump's faults, you can be certain he isn't doing that. Trump is the least subliminal politician in American history. He has no subtext. If he's thinking it, he says it. The claim is ludicrous. But at MSNBC, it wasn't even the weirdest thing recently said on air. That distinction goes to Frank Figliuzzi, a former FBI official turned talking head-conspiracy nut. He used numerology to explain the president's coded messages:

"It's the little things and the language and messaging that matters," Figliuzzi said. "The president said that we will fly our flags at half-mast until Aug. 8. That's 8/8. Now, I'm not going to imply that he did this deliberately, but I am using it as an example of the ignorance of the adversary that's being demonstrated by the White House. The numbers 8, 8 are very significant in neo-Nazi and white supremacy movement. Why? Because the letter H is the eighth letter of the alphabet, and to them, the numbers 8, 8 together stand for 'Heil Hitler."

Got that? Eight is a racist number. That's MSNBC's position. In other words, things are getting dangerously crazy on the left. How crazy? On Monday, former Jeb Bush spokeswoman Nicolle Wallace explained that Trump is planning a genocide of Hispanic Americans:

"President (Barack) Obama used the power of the presidency to try to pass comprehensive immigration reform with the Latino community, Latino leaders at the table," Wallace said. "You now have a president ... talking about exterminating Latinos."

"Exterminating Latinos." Keep in mind Trump got a higher percentage of the Hispanic vote than Mitt Romney did. It turns out that not all Latinos believe in open borders. A lot of them agree with Trump. And yet, the left is now telling you — and demanding that you believe — that anyone who supports Trump is a white supremacist and must be destroyed. They're telling you that for political reasons. It's election season, and they want more power. But there are other reasons, too.

Ever wonder why rich people seem the most hysterical on the subject? Ever notice that it's the highest-paid people on TV who are the most determined to convince you white supremacy is America's biggest problem? Why is that? Simple: Every minute you spend angry about race is a minute you're not thinking about class — which, of course, is the real divide in this country. Working-class people of all colors have a lot more in common with each other than they do with some overpaid MSNBC anchor. If you were allowed to think about that long enough, you might start to get unauthorized ideas about economics. That would be disruptive to a very lucrative status quo. So they whip you into a frenzy of racial fear so that it never enters your mind. It's a diversion. Everyone else hates each other. They get to keep their money. Pretty tricky. Unfortunately, it's destroying the country. This is the path to civil war.

So we want to take a second to pass on a sincere message to official Washington: Please, for the sake of the nation, calm down. Yes, America has problems. Racism is one of those problems. But so are a fading middle class, a terrifying drug epidemic, and a national debt that is growing by $1 trillion a year.

People realize their country is declining, and it's making them turn to new political leaders. Trump was one of them. Elizabeth Warren and Alexandria Ocasio-Cortez are others.

This is a time of frustration and change. But America is not on the brink of genocide, not even close. This is not a white supremacist country, plotting the slaughter of its own people. It's a kind country, full of decent people of all races who, like all people everywhere, make bad decisions from time to time but mean well and generally try their best. Going forward, give them the benefit of the doubt, even when you disagree with them — maybe especially when you disagree with them. These are your fellow Americans. Cut them a break. They deserve it. Remember: The alternative is a disaster.

In terms of numbers; these instigators on the left are actually a very small number. Most are dem politicians, their operatives, or the dem propaganda machine - the MSM, CNN, MSNBC and the lesser outlets.

We do know Google and FB are in on the scam. A lot of this could be alleviated by simply identifying the perps in each organization, make them infamous by shaming them (use the leftist playbook against them), then if that doesn’t make them stop this nonsense; start arresting these perps and put their perp walk on national TV and the Internet for all to see what kind of scumbags they really are. Sedition would be the primary charge. Lawsuits to bury them their mother companies in debt would be helpful as well.

I should add there’s a big difference between inciting a race/ideology war and free speech. I will fight to protect the latter.

At what point does the insanity of the Lert become obvious to downs syndrome sufferers? I do not know but that point is fast approaching.

When are they going to share their treasure trove of super secret decoder rings that enable them to understand Trump secret messages?

It’s hard to know exactly, but the left is getting very close. “

If they’re not there now for you they’ll never be there.

I think we would have to go directly to arrest and sedition charges. They now control communications and the media.

and they're still criticizing everything that's good ...

all according to their plan ...

In particular, I listen to the Dem candidates and wonder who they think they are persuading to vote for them that didn’t vote for Hillary. The political platform and rhetoric coming from the left is completely unhinged and disconnected from reality.

9 posted on 08/09/2019 3:59:17 AM PDT by IamConservative (I was nervous like the third chimp in line for the Ark after the rain started.)
[ Post Reply | Private Reply | To 1 | View Replies]
To: Boomer
But the supporters of the instigators are a vast army of local/state/federal workers, school teachers/administrators/ancillary staff and the recipients of government largess.

This theft is the life's blood of cancer that is the Deep State.

I do too. Make them spend thousands of dollars to defend themselves in court against sedition charges. What’s good for the goose... In fact, as Rush nailed it yesterday by pointing out that 'wacist, wacist, wacist' has now replaced 'Mueller, Mueller, Mueller', and Rush also calling for 'political annihilation of the Left', changing my tagline from "Mueller personally delivered US uranium to Russia." ...

I know some youth that are very responsible. I think most are responsible. What are the real statistics? I think the Media is highlighting the irresponsible few.

Yes. We need to hamstring a whole bunch of them with sedition charges and investigations.

Could there be a class action and web funding for this?

America does not have a racism problem. Individuals may be racists but the country as a whole does not embrace racism, that is, except the democRATS.

democRATS have been talking racism up for decades and decades. It is their mainstay argument.

If you don't agree with them in word and thought, you are obviously a racist.

If your are winning an argument with them you are obviously a racist.

If the president calls out the democRATS for their failures, he is a racist.

And if you voted for that same president and are his supporter, you are a racist by default too. All of you. Half the country, as a matter of fact, are racists according to Joe Biden and the other democRAT presidential candidates.

America does not have a racism problem. But America does has a political party who thrives on race-baiting and racial divide and they fuel the flames of their attacks to gain votes and power.

And until the democRATS and their race messengers stop inserting racism into every aspect of our society and culture, America will never rid itself of the racist label the democRATS place upon us.

Approximately 700,000 of them were shot to pieces.

16 posted on 08/09/2019 6:50:34 AM PDT by TADSLOS (You know why you can enjoy a day at the Zoo? Because walls work.)
[ Post Reply | Private Reply | To 1 | View Replies]
To: Kaslin
Ever wonder why rich people seem the most hysterical on the subject? Ever notice that it's the highest-paid people on TV who are the most determined to convince you white supremacy is America's biggest problem? Why is that? Simple: Every minute you spend angry about race is a minute you're not thinking about class — which, of course, is the real divide in this country. Working-class people of all colors have a lot more in common with each other than they do with some overpaid MSNBC anchor. If you were allowed to think about that long enough, you might start to get unauthorized ideas about economics. That would be disruptive to a very lucrative status quo. So they whip you into a frenzy of racial fear so that it never enters your mind. It's a diversion. Everyone else hates each other. They get to keep their money. Pretty tricky. Unfortunately, it's destroying the country. This is the path to civil war.

Great point. Tucker is great, but given his background, he may not want you thinking too much about class either.

If Trump is a racist, if all Republicans are racists and white supremacists, if Democrats and white progressives are truly “woke” then why isn’t Cory Booker the presumptive nominee?

They can never be allowed to control our nukes again. They have gone certifiably nuts.