The original video, published by the IRGC on April 28, allegedly showed the flight deck of a U.S. Navy aircraft carrier and was used to advance the claim that Iran was spying on the American military. It went public just weeks after Washington placed the IRGC on its list of terrorist organisations.

It said a Guard drone flew over the USS Dwight D. Eisenhower and another U.S. warship in the Persian Gulf. The images show fighter planes parked on the carrier deck. 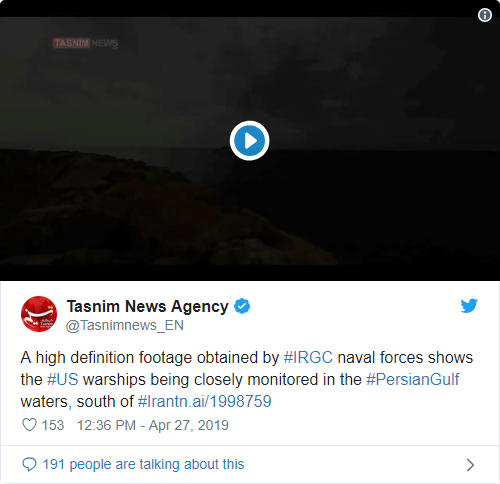 A week after the film was first made public, it was dismissed by the U.S. Navy as “several years old.”

Now France 24 has used Google Earth satellite images to determine the video was taken prior to December 2017, when work was undertaken to extend the landing strip used to show the drone’s original takeoff.

Photos taken after that date show that the surface area of the landing strip is increasing, while the one seen in the video resembles the strip before work began.

The overhead view of the aircraft carrier is similarly called into question. The images are of good quality, but there are no markers in the viewfinder, like GPS coordinates and image scale, that are usually included in footage taken by military drones, France 24 reports.

The images allegedly taken by the IRGC drone were in fact generated by a computer.

Faked or real, it doesn’t matter as long as 3,300 Mexys invade across our southern border.

Muslims always lie first and then try any other approach only after that fails.

There’s a five NM bubble around the flight deck of any CVN conducting flight ops. Anything that shouldn’t be flying there will be shot down, and drones aren’t hard to hit.

Aren’t these the same guys who showed off a new jet fighter prototype that appeared to be made of fiberglass and plywood?

Aren’t these the same guys who photoshopped their fancy new missile battery? The smoke and exhaust were all identical! Yes, lying comes easily and naturally to them.