Race was front and center on Wednesday night during a meeting coordinated to garner support for just one black candidate in Savannah’s mayoral election.

With signs stating “Black press only” on the doors of the church where the meeting was held, white reporters were barred from entry, while black reporters for at least two television stations were permitted inside.

The event was coordinated by the Rev. Clarence Teddy Williams, owner of the consulting firm, The Trigon Group, who declined to discuss the entry policy.

“This is not my idea,” Ellis said.

Savannah Alderman Estella Shabazz, who also attended, said that she had once owned a newspaper and she was a member of the black press, but she declined to comment on the policy barring white reporters from going inside.

While notes were allowed, photos, video and audio recordings were prohibited during the event, according to Stephen Moody, an African-American reporter with WJCL, who was allowed entry. Another reporter from WSAV who attended the meeting was told she could stay because she was black, Moody said.

Shirley James, the African-American publisher of the black-owned Savannah Tribune, was also seen going into the meeting.

Savannah Alderman Van Johnson, who is one of three African-Americans who have stated their intention to run for mayor, said afterwards that during the meeting he had talked about his vision for an inclusive and progressive Savannah. With regards to the discriminatory policy at the door, Johnson said he believed people have the right to assemble and determine the rules of their assembly.

It’s not my meeting,” Johnson said. “I was asked to come and give a statement, so I came and I gave a statement. What I said in there, I’ll say out here.”

Louis Wilson, who said he is going to run for mayor again after an unsuccessful run in 2015, also spoke during the meeting about his priorities. Afterwards, Wilson also declined to discuss the press restriction.

“I didn’t plan the meeting so I can’t comment on that part,” he said. “I came to say what I had to say.”

Former state senator and representative Regina Thomas, who has announced her own campaign, did not attend the meeting. In an interview earlier this week, Thomas said she believes she can win, even if there is another black candidate.

“I’m encouraged every day by people of all persuasions,” Thomas said.

Meeting attendees were given a handout reporting the ethnic composition of Savannah’s population, as well as a vote breakdown for the 2015 election, when incumbent Jackson was defeated in a run-off by current Mayor Eddie DeLoach.

Also distributed was an editorial in the black-owned Savannah Herald titled “United We Win, Divided We Lose” that was written by former Mayor Otis Johnson. In the piece, Johnson called on the black population to organize itself to increase its influence over what happens in the community, starting with the mayor and council.

“If we come together and decide what we want and who we believe will work best for us to get it, then we have a chance to advance,” he said.

That may not be a game winning strategy.

this is a blatant violation of Civil Right punishable by prison. Barr needs to get after it as soon as he can redact as much as possible from the Mueller report to piss the rats off.

We have been told for many years that lacks cannot be racists, because they are not in power. Clearly, and especially after the last 10 years, that is no longer the case.

Louis Farrakhan has said black people cannot be racists and I guess a lot of them believe that.

Well ain’t he the HNIC?

I did not organised this meeting I was asked to come, and yes they all came, but imagine if only white reporters were allowed and some of those reporters and candidates went to the meeting? Yes all those who attended would be classed as racist.

So I hope a lawsuit happens and where is SPLC, CNN, MSNBC and the whack job left on civil right, ah yes to them it is OK to be racist towards whites.

The Klan with a tan.

There is still such a thing, right??? 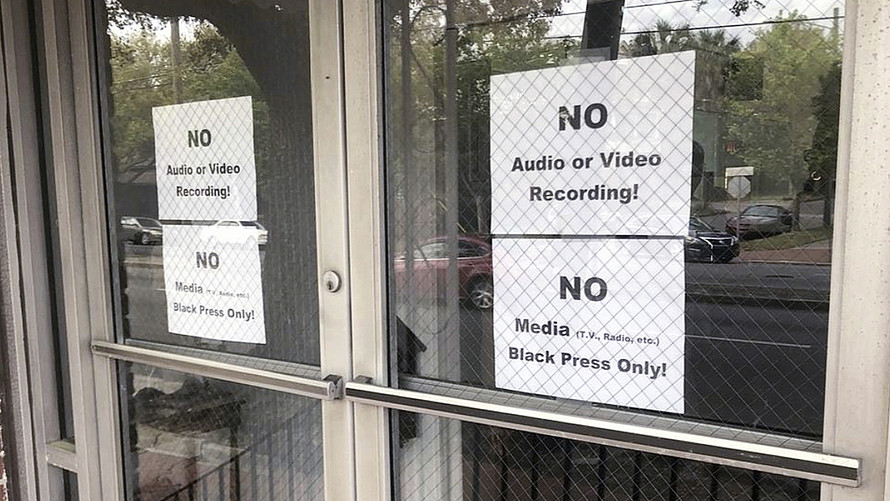 What would have been said had a white candidate barred black reporters?

Is that question really aimed at me? It has nothing to do with what I was discussing.

No reporter should’ve participated until all were allowed in.

If a meeting was called by whites, and a sign said white reporters only, we all know what would happen -— lawsuits, calls for arrests, and BLM, et al, rioting. CNN and MSNBC would feature it every night for months. Oh...and President Trump would be accused of white nationalism and inciting people to committee discrimination based on race, which I thought was a federal crime. Maybe we should act like those people would have, but I just can’t lower myself to that degree (rioting, etc.)