The only thing that should keep you roaring in laughter as Nancy Pelosi freaks out trying to keep a lid on the freak show that is the Democratic caucus is the knowledge that the freshmen freakettes giving her fits would impose an ideology of tyranny and murder if given the chance. But you can still allow yourself a good giggle as you watch Nancy’s dreams of a Democrat majority die on the altar of anti-Semitism, taking away your health insurance, and banning cheeseburgers.

This was on display as the Democrats struggled to find a way to publicly pretend to condemn their superstar bigot’s hatred of Jews without annoying all the Democrats for whom hatred of Jews is a key component of their intersectional web of leftist prejudices. Nancy essentially tried to excuse it by explaining that Rep. Ilhan Omar (D-Berlin) is too stupid to know she’s anti-Semitic which, to be fair, is plausible.

She could only get her caucus to agree to condemning all prejudice, sort of, including the tsunami of prejudice against Pacific Islanders that we all see around us so much in our daily lives. Take that, people who hate Pacific Islanders.

Of course, the Democrats never named the actual bigot because the Democrat base is affirmatively pro-bigotry. They hate Jews, Christians, white people, dissident non-white people, men, women who like men, and people who blaspheme against the creepy climate cult, among others. The list of Bad People Who Are Bad goes on and on – the key element of intersectionality is that it always intersects with ugly prejudices against groups that leftists see as insufficiently supportive of their sick ideology.

Which is Nancy’s problem, because she won the House back last year by hiding the left-wing evil bubbling under the surface of her party’s collective dogma. She defeated the feckless Paul Ryan – what a loser – by running candidates in largely purple suburban districts who promised that if the voters tossed out the squishy Republican incumbent, the sensible Democrat moderate challenger would not go to Washington and do anything kooky. And, of course, the Lucy’s football phenomena was in full effect as these Nanchurian Candidates trooped up Capitol Hill and promptly got sucked into the crazy.

Suddenly, instead of playing the fake moderate game, Nancy’s minions had to suck up to a bunch of braying bimbos from safe blue seats. All the nonsense Reps. Talib, Omar, and Ocasio-Cortez spewed on social media and MSNBC thrilled the Democrat base. But what Normal people heard was, “We hate Israel. We hate the idea that you can have cars. We hate you.”

And the fact that these commie-come-latelys are so inept is icing on the cake. Rep. Omar couldn’t help but run her fool mouth about what she really thought of the Jews. Rep. Ocasio-Cortez could not manage to let fly with her Green New Deal without making the rookie mistake of telling the people what was actually in it. Free money for those unwilling to work? Maybe that dog hunts among the simpletons in her New York City district, but in America, not so much.

Not only does it rile up Nancy because these clumsy radicals have stolen the spotlight and made it immeasurably harder to pull off her “We’re sensible” scam on the swing seat suckers but it rankles because none of these debutantes have paid their dues. Nancy and the rest of her leadership worked for years and years accumulating power, rising through the ranks, and when they finally regained power suddenly these newbies who paid no dues but have a lot of Twitter followers showed up and took over the Democrat agenda. That’s got to be infuriating, and you can see it when Nancy talks about them – she can’t say it out loud, but you know what’s running through her mind is, “Who the hell do these upstarts think they are?”

Well Nancy, they seem to be your party’s future.

The thing is that the Democrat base loves them. These radicals are out of the moderate closet and letting their freak flags fly. Death to Israel! Death to borders! Death to private property. Death to Big Macs!

Nancy could barely manage to applaud (while staying seated) the idea that America will never be socialist. These radicals are now forcing her to stop hiding the party’s real objectives far too soon. The truth was only supposed to come out after they had hold of total power, not so early that we Normals could wake up and stop the onslaught. But now, 2020 is going to provide a whole bunch of great questions to smart Republican candidates, in the off chance there are any:

Do you support the Democrat plan to ban cars and planes?

Do you support the Democrat plan to take away your private insurance and force you onto government healthcare?

Do you support the Democrat plan to abandon Israel?

Do you support the Democrat plan for open borders?

Do you support the Democrat plan for illegal alien voting?

Do you support the Democrat plan to allow doctors to kill babies?

Even the wimps in the purple districts, the gooey mommies who found Trump icky and their Fredocon hubbies who said “Yes, dear” to wifey’s command to vote against the part of Bad Orange Man last November, are going to think twice about backing these nutty Dem plays. It’s all fun and games until Alexandria Ocasio-Cortez shows up and tells you that you gotta lose the SUV you use to cart Kaden and Ashleigh to soccer practice.

The moderate Dems will have to turn on the radicals or get turned out. It already happened once as a couple dozen Dems joined Republicans to add an amendment to a gun grab bill that mandated reporting illegal aliens to ICE if they tried to buy a firearm. Ocasio-Cortez and her group opposed it. In fact, the Lil’ Kommissar even threatened to put these rebels on a list to be terminated (via primary now) for daring to *squints real hard* want to report to immigration authorities any illegal aliens trying to illegally buy guns.

Nothing like intra-pinko cannibalism. Turn the Democrat Party into the Donner Party. While you consume each other, I’ll be here gobbling cruelty-free, carbon neutral popcorn.

But, of course, there is always a chance that things don’t go the way we hope, and that there are enough historically ignorant suckers in the big blue cities to allow these freaks to take over the levers of power. Sure, the Democrats’ pain is hilarious, but the fact that a major political party has surrendered itself to the zealots of an ideology that has murdered 100 million people is not so hilarious. Maybe if the socialists get in charge here, they won’t bring misery and murder. Maybe the ones in Congress now are so smart and competent that they can actually make this blood-splattered ideology work. But it’s going to be a hard sell for the Dems to get us to bet our lives on it.

Democrats struggled to find a way to publicly pretend to condemn their superstar bigot’s hatred of Jews...

Nah. They got plenty of help from Rs, who all but what, 23, voted for the piece of garbage that was presented?

Americans are to blame for allowing the job of house member or senator to become a job NO ONE wants to relinquish or lose.

It wasn’t supposed to be a “great job”.

It isn’t just democrat muslims. Go to any college campus for decades now and there is always a seminar equating Israel with Nazis. These young people know nothing of real nazism or real freedoms and they are totally indoctrinated.

In the last fifty years, one thing I’ve learned is to never underestimate crazy. 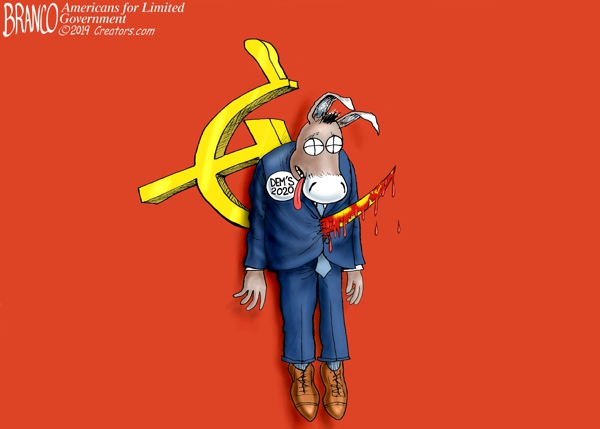 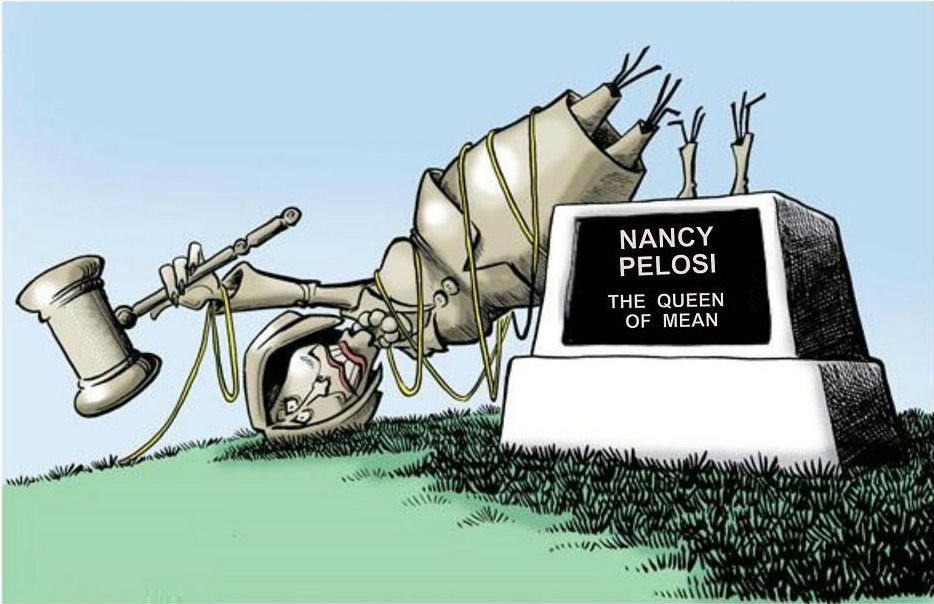 If he had I would have not re-posted it. Besides I don't think it belonged in chat. Columns by Colonel Schlichter are more important than just being tossed into chat

You sow the wind. You reap the whirlwind.

10 posted on 03/11/2019 4:41:33 AM PDT by HighSierra5
[ Post Reply | Private Reply | To 1 | View Replies]
To: Kaslin
I've seen a lot of pundits present the goings-on in the Democratic Party as a dispute between Nancy Pelosi and a bunch of these radical dingbats who couldn't think their way out of bed in the morning.

That's not what this is all about.

Pelosi isn't some kind of crime family boss here (though she may be that, too). She has an astute political machine behind her that knows damn well how idiotic it is for the party to embrace a bunch of idiotic ideas that have no political support -- or corporate support -- outside a handful of districts where radical leftists routinely get elected anyway.

The clash among the Democrats in the House is between this small rabble of radical idiots and the much larger number of Democrats who: (1) represent districts that Trump won in 2016, and/or (2) were elected in 2018 to replace Republicans in wealthy suburban districts. Item (2) in this group is important. There are probably at least 40 Democrats representing districts where the "1%" those freshman Marxists always complain about are the dominant swing voters.

13 posted on 03/11/2019 4:48:58 AM PDT by tired&retired (Blessings)
[ Post Reply | Private Reply | To 8 | View Replies]
To: Kaslin
"The Democrat base is affirmatively pro-bigotry. They hate Jews, Christians, white people, dissident non-white people, men, women who like men, and people who blaspheme against the creepy climate cult, among others."

Shout it from the highest mountain...!

Thank you for reposting.

“Social Studies” is substituted for actual history and the reading lists for their “language arts” curricula are almost completely composed of anti-white-man, anti-western-civilization, anti-God, anti-American and anti-family (Queer and pro “gender-fluidity” agendas) compilations starting with the first readers. Forget the classics. Collective brain washing towards a communist man-made worldwide “dystopia” is the goal here, not the fostering of critical thinking skills so that our students can learn to think for themselves.

K-12 is the playground for the formation of a herd mentality aided and abetted by the social media group-think that American young become to addicted to at very tender ages.

If patriots do not get in there and change these curricula, it will not matter if President Trump succeeds because two generations from now (or less) all Americans will think like OAC.

These actions must be taken as a priority, after the wall, and even better, at the same time as the wall.

I believe Nancy is knowing what is going on...

Venezuela has now entered its 6th straight day without electrical power. I don’t hear anything about it from the Democrat Socialist Party.

Hillary won the popular vote...... we are vulnerable