"I'm still somewhat mystified about how Tony Podesta - intimately involved in many of Paul Manafort's slimiest and most unscrupulous practices (because K Street sleaze is 100% bipartisan) - has just vanished from the news cycle and, apparently, legal jeopardy," the Intercept journalist said along with the hashtag "MissingTonyPodesta." 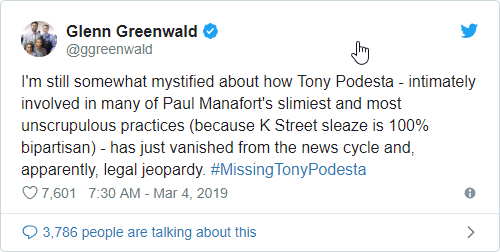 Greenwald, a Pulitzer Prize-winning journalist who broke the story of U.S. mass surveillance aided by former Central Intelligence Agency analyst Edward Snowden, has been highly critical of Russia investigation coverage and the Democrats' role in fueling it.

His Twitter observation about Podesta, the founder of the now-shuttered Podesta Group and brother to former Hillary Clinton campaign chairman John Podesta, came ahead of the widely covered sentencing of former Trump campaign chairman Paul Manafort, who got less than four years behind bars for eight financial crimes, including bank fraud, tax fraud, and failure to disclose a foreign bank account.

Indeed reporting on fresh developments in the Podesta case have been sparse in recent months while the media's focus on the Russia investigation and inquires into President Trump remains intensive and widespread.

Special counsel Robert Mueller's investigation into Manafort led to the review of Podesta and his work for his former firm, the Podesta Group, and other lobbyists. Manafort's and Podesta's firms worked together in a public relations campaign for the European Centre for a Modern Ukraine (ECMU) nonprofit, which is believed to be backed by the pro-Russian and oligarch-funded Ukrainian political group, Party of Regions.

Things that make you go “Hmmmmm”.

He’s on some island that doesn’t have extradition.

Gitmo is about the only facility ol’ Tony would last 5 minutes. Prisoners frown upon perverts that prey on little boys and girls. Pedaphiles and rat finks rarely survive in prisons very long.

The story is about Podesta being off the news cycle, not that he has disappeared.

Crooked bastard’s probably headed for South America...to a country with no extradition!!!

Now I'm mystified. It's like he also is intentionally going nowhere in finding out what is going on.

(me send 'em heap big smoke signal...get out in front of big story before dam breaks and torches and pitchforks come out) /speculation

If not currently soon should be!

Yes it couldn’t happen to a nicer guy.

There is also the difference of degree: Podesta is far more a reprobate than Manafort, no matter what crimes Manafort may in truth have committed.

Yep. Wonder if he is “visiting” Amelia Earhardt?