The recent clash between Russian and Ukrainian naval vessels in the Kerch Strait has generated a flurry of alarm. NATO was compelled to call an emergency meeting with Ukraine and the UN Security Council convened an urgent session to discuss the crisis. Exercising their usual tendency to oversimplify murky geopolitical rivalries, Western officials and journalists embraced the knee-jerk narrative that the incident is yet another case of Vladimir Putin’s blatant aggression and “outlaw behavior” against its peace-loving, democratic neighbor. Right on cue, CNN, MSNBC, and other media outlets dispatched stridently anti-Russian editorials masquerading as news stories.

I agree the Ukraine is not guiltless, and that Russia has a good case.

But, for heaven’s sake,none of it is the business of the US.

As John Adams said, While we encourage liberty abroad, we are custodians only of our own. And we do not go abroad to seek dragons to slay. (paraphrase).

And then there is Washington’s advice to stay out of foreign entanglements — because foreign nations would only wish to use us to aid their own causes.

Sad to say I still see some on FR who still want more foriegn US involvement when we need to stay the hell out and worry about our business here not over there.

It’s against international law to threaten a bridge like Ukraine has done. Russia has also broken a number of international laws. That said, we need both of them to behave so we can keep a balance of power and strategic and economic interests.

Our support for Ukraine might be justified if Russia were acting like Germany was acting before WW-II, when continual appeasement encouraged a Germany bent on conquest to continually push the envelope. But can we really say that, if we don’t reverse Russia’s acquisition of the Crimea, they’ll keep trying for more? And what is our stake in the Crimea? Russia certainly has more of a claim on the formerly Russian Crimea than Germany ever had over Poland and Austria.

“The United States does not have vital strategic or moral interests at stake in the overall Ukraine-Russia quarrel, much less the latest parochial spat in the Kerch Strait. A cautious, restrained posture is appropriate.”

There are dozens here on FR that will side with Ukraine, no matter what. No matter how illiberal they are in all their domestic and international affairs.

Because they share the same hatred of Russia that the Ukrainian government does.

Oh, and it’s none of our business here in the US. We don’t have a dog in that fight and never have.

Hopefully we never will.

Certainly any talk or hope of Ukraine joining NATO are the ramblings of the insane. Or the stupid.

But, for heaven’s sake,none of it is the business of the US.

It is our business only in the sense that the US & EU installed the gangster regime in Kiev. There is much blood on our hands. And Trump is being bullied into making it worse.

Ukraine is corrupt. I big historical victim too, thanks to the Russians. A potential great economy? They’ll have to do it on their own.

But there are other Trump positions that are deeply disturbing, if not outright offensive to the kind of non-interventionists (or “cosmopolitan realists”) who have filled the ranks of Cato’s foreign policy program. Trump’s hostility to free trade is both disappointing and myopic. But his stance on immigration is even worse. His proposal to build a wall along the border with Mexico to keep out undocumented Hispanic migrants is not only impractical, it conveys a message of hostility to such populations. Trump’s stance on Muslim immigration, especially his call for a “temporary” ban, conveys such hostility with even greater clarity. His support for trade protectionism, combined with adamant opposition to liberal (or even reasonably humane) immigration policies and indeed his overall xenophobic rhetoric understandably alienate more cosmopolitan non-interventionists. What they may find difficult to admit, though, is that Trump’s type of insular, intolerant nationalism has a long history within the non-interventionist camp.

Sell the Ukraine out just like Great Britain did Czechoslovakia. Sure, why not what do you care if free Ukraine is once again subjugated under the merciless hob nailed boot of Russian tyranny.

Especially since it was Obama, Merkel, Nuland and others who turned Ukraine on its head 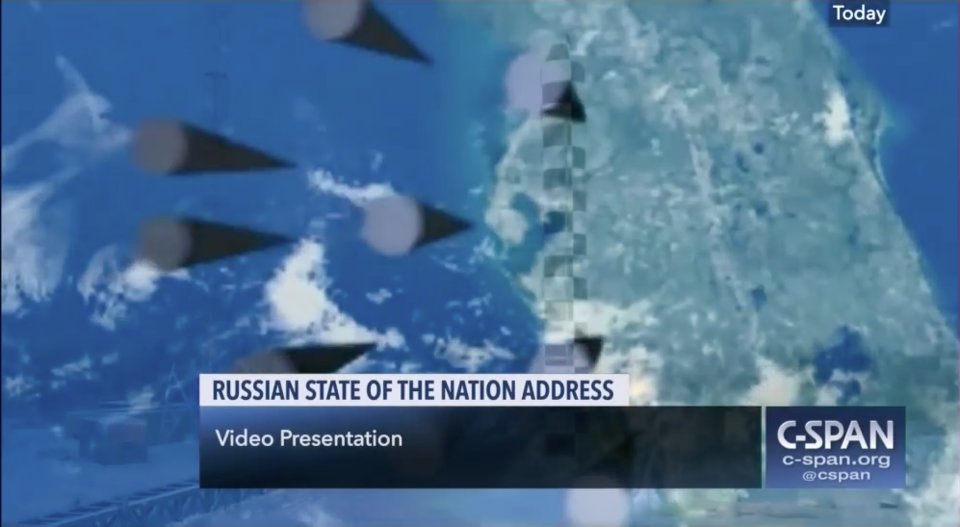 When the video first came out, former CIA Director Michael Hayden said on CNN that he found it "stunning" Russia would show a video depicting Florida getting nuked and said "clearly" Putin "wanted us to see that."

1) Russians fought a bloody civil war to stop the communists, many killed and fleeing for their lives

2) Anyone who refused commands of Stalin etc was summarily killed or sent to death camps, often along with their whole family

3) Stalin wasn’t even Russian you know

Just go ahead and form your own Lincoln brigade and go over there and fight. As for my family, where done supporting idiotic foreign adventures.

I make absolutely no apologies, Russia has had ongoing, never ending designs on Ukraine for centuries. And they want it still.

If Russia, which gained territory illegally thru threats, subversion and aggression, is allowed to dictate the terms of “free passage” on important water ways, then Iran will control the Straits of Hormuz and if the Houthis (Iran’s allies in Yemen) take over that country, they can claim control over the Red Sea and adjoining major bodies of water.

Stop aggression now, or Red China will rule the Pacific/South China seas and any other body of water they want to claim.

18 posted on 12/05/2018 9:57:43 PM PST by MadMax, the Grinning Reaper
[ Post Reply | Private Reply | To 1 | View Replies]
To: Pining_4_TX
The Ukraine is unbelievably corrupt, and that is why the even more corrupt, but more numerous, Russians can beat them. 90-95% of any aid we send the Ukraine must be written off as lost to corruption. And any high-tech items we give them end up in Russian (and Chinese) labs.

Actually helping the Ukraine requires much planning and hard work on getting past the corruption.


Russia is acting like Germany before WWII by attacking neighboring countries with minorities that speak its language. Note that Nazi Germany, at its maximum extent, occupied 1/4 of Russia’s present day territory. Before its annexations of the Sudetenland and Czechoslovakia, it occupied 1/35 of Russia’s current land area. Germany had a case for needing lebensraum. Russia has none.


Russia has traditionally been the overweening imperial power in the region. It started over 600 years ago, when Dmitri Donskoi threw off the Mongol yoke. Today, Russia is almost 2x the size of the second largest country in the world (Canada). And yet it doesn’t yet have enough land. That’s not a sign of a country whose territorial ambitions will ever be sated.