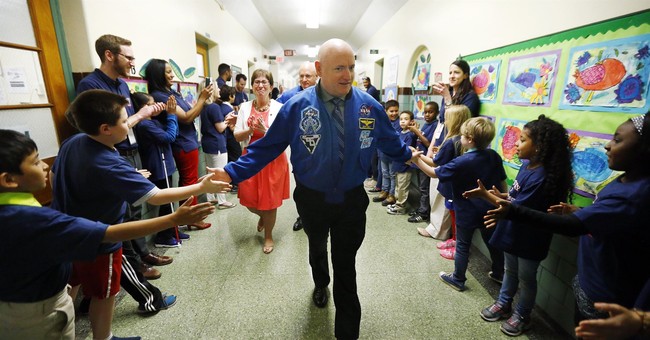 There are many reasons I pity today's younger generation of Americans.

--The unconscionable debt we are leaving them.

--The obliteration of male and female as separate and distinct categories -- and the sexual confusion that is left in its wake.

--The emasculation of men and the de-feminization of women.

--The undermining of the value of marriage.

--The lack of God and religion in their lives -- and the consequent search for meaning in the wrong places.

--The receiving of indoctrination, rather than education, in most schools from elementary through graduate.

--The inability to celebrate being American.

Tragically and ironically, each one of these was brought on by the very group many young people identify with: the left.

You can add the left's tearing down of heroes to the list.

This came to mind this past month, when world-famous astronaut Scott Kelly, who spent a year on board the International Space Station, among other space-related achievements, tweeted the following message in commenting on the deep divisions in American politics: "One of the greatest leaders of modern times, Sir Winston Churchill, said, 'In victory, magnanimity.' I guess those days are over."

He was then widely attacked on social media -- for quoting former British Prime Minister Churchill and deeming him a great leader. According to the trolls, Kelly is now in league with the hateful, racist Winston Churchill.

Thus, to many -- perhaps most -- young Americans, the Founding Fathers of America were not the giants you and I believe them to be. They were rich, racist, misogynistic white men. Now it is Churchill's turn to be torn down. It means nothing to the left that he led the world in fighting the greatest racist of all time, Adolf Hitler, and the greatest racist ideology of all time, Nazism. All that matters is that he made some race-based comments about English cultural (not racial) superiority and that he was allegedly complicit in the Bengal famine of 1943 in which between 1.5 and 3 million Indians died.

With regard to the latter, Churchill's left-wing detractors claim Churchill said the famine was the Indians' fault for "breeding like rabbits."

But this is overwhelmingly, if not entirely, left-wing smear. Regarding Churchill's attitude toward Indians "breeding like rabbits," Andrew Roberts writes in his just-published a 1,000-page authoritative biography of Churchill: "Churchill had previously long instanced the astonishing population growth in India in the first four decades of the twentieth century as a mark of the success of the Empire and in November 1942 he was still boasting to the Spanish Ambassador, the Duke of Alba, 'Since the English occupation of India the native population has increased by a hundred million. Since the American War of Independence, the Red Indian population has practically died out.'"

As regards Churchill's racism, Roberts writes of Churchill as early as 1900: "Churchill had no sympathy for the aggressive white supremacism of the Afrikaner, from which his own paternalistic instincts were entirely different. He wrote of a future South African society in which 'Black is to be proclaimed the same as white ... to be constituted his legal equal, to be armed with political rights,' a prospect that infuriated Afrikaners no less than would be 'a tigress robbed of her cubs.'"

And as regards the Bengal famine, Churchill's official biographer, the late Sir Martin Gilbert, whom I personally knew to be among the most honest writers I ever met, said: "Churchill was not responsible for the Bengal Famine. I have been searching for evidence for years: none has turned up. The 1944 Document volume of the official biography (Hillsdale College Press) will resolve this issue finally."

But none of this matters to the left. As I wrote previously, those on the left regard themselves as Ubermenschen, superior to all those who lived before them and all those who differ with them today.

But the worst part of the Scott Kelly story is the astronaut's immediate reaction to the negative tweets: "Did not mean to offend by quoting Churchill. My apologies. I will go and educate myself further on his atrocities, racist views which I do not support. ..."

In Kelly's view, Winston Churchill went from "one of the greatest leaders of modern times" to a man whose "atrocities and racist views" he will further educate himself on.

You know why? Because in America today, the greatest fear is fear of the left. Apparently, the left is even scarier than outer space.

They should send a message to the ISS and ask them if they’ve found a spine floating around.

We need to stop with this nonsense and just tell the Left to go pound sand.

Churchill not a great man? Screw you! He was. PERIOD. Then let them talk to the hand.

Don’t even try to defend Churchill’s actions, life and words. They certainly speak for themselves.

What shouldn’t happen is to get in a deep argument with these trolls. Laugh in their faces, tell them their full of schitt and move on.

Being an astronaut does not insulate one from ignorance.

nihilism + hatred of the good for being the good = leftardism

You can bet once we do send a manned expedition to Mars the first person to set foot on it won’t be white. NASA is probably training that person right now. It’s a Black or Hispanic transgender woman who practices Islam and belongs to the Democrat Party!

World famous for sitting on his ass doing nothing for a year in the “space station”. That’s quite an accomplishment.

I’m sure he spent plenty of time on the ‘Colbert’ treadmill.

11 posted on 11/20/2018 7:13:57 AM PST by real saxophonist (One side has guns and training. Other side's primary concern is 'gender identity'. Who's gonna win?)
[ Post Reply | Private Reply | To 9 | View Replies]
To: Kaslin
,i>But the worst part of the Scott Kelly story is the astronaut's immediate reaction to the negative tweets: "Did not mean to offend by quoting Churchill. My apologies. I will go and educate myself further on his atrocities, racist views which I do not support. ..."

Be like President Trump. When he is subjected to this sort of attack, he fires back and never apologizes. And I along with millions of Americans admire him for that.

Likewise his twin brother Mark...Peas in a pod...

Excellent posting. The saddest part is that he caved and apologized. The left destroys everything that is good.

A world that worships bammy and demonizes Churchill is on the road to perdition.

Kelly is an attention whore on 4 wheels.

Not to mention, as a Navy O-6, having violated his Oath of Office by going full jackass on the anti-2A-defense from tyranny bandwagon.

This is one of the reasons I stopped arguing with the Left years ago.

I simply reject them outright.

There is nothing of value associated with the Left, unless you view the deconstruction of Western Civilization as value.

Rome rising. It happens to all great societies.

Never apologize to a leftist. That’s like exposing your neck to a vampire.