Acosta, a longtime critic of the president, tweeted from Paris that he was there to cover Trump's visit

On Friday Trump told DailyMail.com as he left the White House that he hasn't decided how long Acosta will be without a press pass, and more bans may follow

He also lashed out at a black reporter who appears on CNN as a commentator, calling her a 'loser' who 'doesn't know what the hell she's doing' in her job

Ryan shouted out questions Wednesday despite Trump never calling on her, a tactic she uses with some success to press the administration on race issues

CNN reporter Acosta tweeted a defiant message to Donald Trump from Paris Friday, saying he intends to cover the president's trip there despite being stripped of White House press credentials.

The reporter tweeted a view of the Eiffel Tower and said: 'Greetings from Paris where we are on the ground for Trump’s trip to France. #1A'

The hashtag is a reference to the first amendment, which guarantees freedom of the press.

Acosta's French message suggests that he will attempt to gain access to events attended by Trump to commemorate the end of World War One even though he no longer carries Secret Service-issued press credentials.

Those credentials are themselves meaningless in Paris, raising the possibility that he will once again be in proximity to the president.

TOPICS: Front Page News; News/Current Events
KEYWORDS: acosta; cnn; duplicate; jimacosta; media; msm; trolls; trump Navigation: use the links below to view more comments.
first 1-20, 21-40, 41-60, 61-79 next last
Trump, speaking before his departure, said that he hasn't decided how long Acosta will be banned from the White House, and threatened to revoke the credentials of other reporters next. 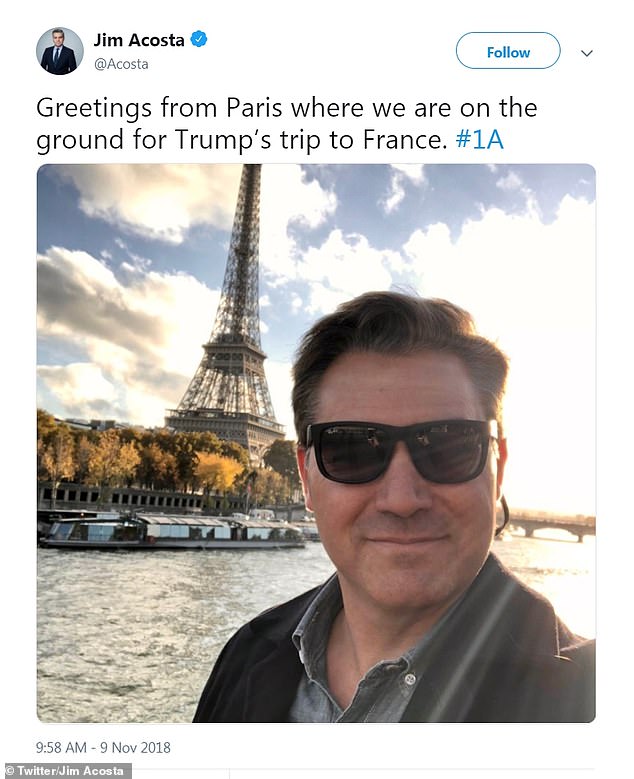 Good for you Jim. Now you will be like thousands of other “reporters” who tell their story from a distance. Only a handful are allowed in the White House but I hear the view from the sidewalk ain’t bad.

I believe that is what we mean by press freedom. Bless him!

Nothing in 1A about debating on the President’s microphone.

Jim Acosta (#TheAccoster): more important than the centenary of the Armistice... just ask him.

Are there no stalker laws in France?

Can’t wait for the one liner Trump barbs at him. I’m sure Acosta will be woefully unprepared for it.

He has a right to make an ass of himself wherever he can.

If he’s an ass pull his passport.

This guy is a psychopath, if he gets too close to the president, I hope the SS tase him, that would be the best video of all times

I do believe the SS can remove his ass from any venue world wide if they wish too. So laugh it up Butt Boy Acosta, laugh it up.

He is a pain in the you know what.

No one (NO ONE) (Not even the President) has a “right” in the constitution to be inside the White House or aboard Air Force One.

As a US Citizen (presumably without felony convictions or other security-related reasons to deny a passport), he has the right to leave the country. If France chooses to allow him to enter, then so be it. (Thus, there’s no problem with him being in Paris)

So if he wants to cover the POTUS visit, that’s his right.

Since he doesn’t have a press pass any longer, I hope he doesn’t try to get within the national security cordon established. After all, use of deadly force is authorized there in the case of threats. The mentally unbalanced often create those kinds of threats.

And he exercises that right every chance he gets. :-)

Would be a real shame is a Secret Service agent accidentally bumped into Acosta while he was standing on the river bank, and he like fell in...

I’d feel bad. For about 2 seconds. Then I’d laugh my ass off.

Brave acosta could show his manliness with a walk through a no go third world zone.

He can “cover” all he wants to. But he cannot be part of the White House Press Poll.

Are you referring to “President” Trump, Acosta????