For several months during Bill Clinton's administration, a former top military officer says the White House lost the card with a set of numbers for opening the briefcase containing the codes for a nuclear attack.

Gen Hugh Shelton, who was Chairman of the Joint Chiefs of Staff at the time, said in his new memoir, "Without Hesitation: The Odyssey of an American Warrior" that "the codes were actually missing for months. That's a big deal -- a gargantuan deal."

A similar claim was made by Lt Col Robert Patterson, a former aide, in a book published seven years ago. He was one of the men who carried the briefcase, known as the "football", and he said that the morning after the Monica Lewinsky scandal broke that he made a routine request of the president to present the card so that he could provide an updated version.

Maybe Monica copped the card while bill’s eyes were rolled back in his head.....

Ahhh, I thought the killer swamp rabbit ate it.

And half the country want these traitorous bastards in charge of the military and intelligence?

Good lord. GTTHO of our country

This happened. Most the reporters knew it had happened.
Nobody leaked to the public, or were allowed to leak the story. That would be so very different if it happened in the Trump White House.

One of Billy’s russian girlfriends still has it.

Or IN Monica. Monica: “Forget the cigars tonight, go nuclear on me big boy!” Bill: “Okay, let’s see.....well, we could try this little card thingy, that might work for you.”

Did they check stephanopoulus’s sink? This happened. Most the reporters knew it had happened.
Nobody leaked to the public, or were allowed to leak the story. That would be so very different if it happened in the Trump White House.

Oh my gosh, wouldn’t it? Trump would be hanged by the flagpole before sunset.

Jimmy still awakens with PTSD nightmares over that rabbit. What if it secretly followed him home? Lurking.

It just gets worse and worse.

It is a miracle that we have survived the Demon party. 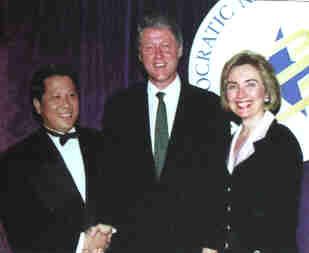 The Idiot's Guide to Chinagate

CHINA WILL LIKELY replace the USA as world leader, said Bill Clinton in a recent Washington Post interview. It is just a matter of time. Clinton should know. He has personally done more to build China's military strength than any man on earth.

Most Americans have heard of the so-called "Chinagate " scandal. Few understand its deadly import, however. Web sites such as "Chinagate for Dummies" and its companion "More Chinagate for Dummies" offer some assistance. Unfortunately, with a combined total of nearly 8,000 words, these two sites - like so many others of the genre - offer more detail than most of us "dummies" can absorb.

For that reason, in the 600 words left in this column, I will try to craft my own "Idiot's Guide to Chinagate," dedicated to all those busy folks like you and me whose attention span tends to peter out after about 750 words.

When Bill Clinton took office in 1993, China presented little threat to the United States. Chinese missiles "couldn't hit the side of a barn," notes Timothy W. Maier of Insight magazine. Few could reach North America and those that made it would likely miss their targets.

Thanks to Bill Clinton, China can now hit any city in the USA, using state-of-the-art, solid-fueled missiles with dead-accurate, computerized guidance systems and multiple warheads.

China probably has suitcase nukes as well. These enable China to strike by proxy - equipping nuclear-armed terrorists to do their dirty work, while the Chinese play innocent. Some intelligence sources claim that China maintains secret stockpiles of chemical, biological and nuclear weapons on U.S. soil, for just such contingencies.

In 1997, Clinton allowed China to take over the Panama Canal. The Chinese company Hutchison Whampoa leased the ports of Cristobal and Balboa, on the east and west openings of the canal respectively, thus controlling access both ways. A public outcry stopped Clinton in 1998 from leasing California's Long Beach Naval Yard to the Chinese firm COSCO. Even so, China can now strike U.S. targets easily from their bases in Panama, Vancouver and the Bahamas.

How did China catch up so fast? Easy. We sold them all the technology they needed - or handed it over for free.

Neither neglect nor carelessness are to blame. Bill Clinton did it on purpose.

As a globalist, Clinton promotes "multipolarity"-the doctrine that no country (such as the USA) should be allowed to gain decisive advantage over others.

To this end, Clinton appointed anti-nuclear activist Hazel O'Leary to head the Department of Energy. O'Leary set to work "leveling the playing field," as she put it, by giving away our nuclear secrets. She declassified 11 million pages of data on U.S. nuclear weapons and loosened up security at weapons labs.

Federal investigators later concluded that China made off with the "crown jewels"of our nuclear weapons research under Clinton's open-door policy - probably including design specifications for suitcase nukes.

Meanwhile, Clinton and his corporate cronies raked in millions.

Needless to say, China does not share Clinton's enthusiasm for globalism or multipolarity. The Chinese look out for Number One.

"War [with the United States] is inevitable; we cannot avoid it," said Chinese Defense Minister General Chi Haotian in 2000. "The issue is that the Chinese armed forces must control the initiative in this war."

Bill Clinton has given them a good start.

Can you imagine Trump doing this? 1000 years from now, it still would be breathlessly reported by the left-wing press.

18 posted on 11/04/2018 11:44:48 AM PST by rightwingcrazy
[ Post Reply | Private Reply | To 1 | View Replies]
To: bitt
You know, the business about transferring the jurisdiction over satellite technology from State to Commerce, to allow Loral to help China with the MIRV guidance for their ICBMs was enough. But this ought to be enough to have anyone remotely associated with the Clinton DoD, to be shipped straight to Leavenworth, for life. How can one guarantee that our system for LAUNCHING nukes is not now compromised?

And imprison Hillary for good measure.