“We’re the only country in the world where a person comes in and has a baby, and the baby is essentially a citizen of the United States ...

Yes. Doodledork is well versed in the liberal talking points because he’s a troll.

Why do you have to go there? Disagreeing on certain issues doesn’t make you a troll. There is certainly confusion on these points. I have questions too and I have a personal interest since my daughters were born overseas.

“This will not, of course, include persons born in the United States who are foreigners, aliens, who belong to families of ambassadors or foreign ministers” is a confusing sentence. I believe properly read you would need an “or” between foreigners and aliens to make it agree with your interpretation. Seems the entire sentence ONLY includes diplomats who indeed have immunity to our jurisdiction. Every other person of alien descent ARE subject to our laws and are U.S. citizens, otherwise, how can you arrest them?

As much as I detest it, I abhor anchor baby concept but Senator Howard made the statement that that can be interpreted as saying that everyone born here IS a U.S. citizen except for the diplomat’s seed.

You don’t have to be nasty to make a point!

Why? The author of the citizenship clause of the 14th Amendment has already made it clear. 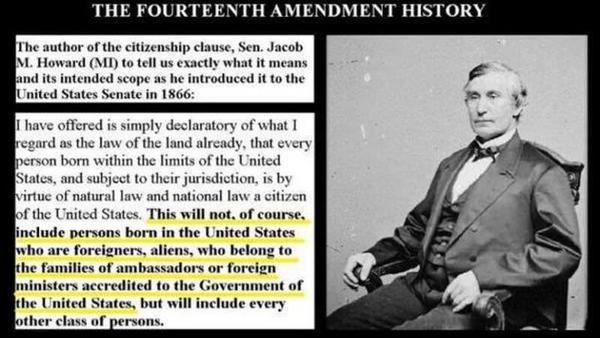 “As much as I detest it, I abhor anchor baby concept but Senator Howard made the statement that that can be interpreted as saying that everyone born here IS a U.S. citizen except for the diplomat’s seed.”

NOW would be a good time to “step down” from the Earth, Notorious RBG.

No doubt Nielsen leaked it

My daughters were born on English soil while I was stationed in London, and they most certainly have dual citizenship. To say you are not subject to the jurisprudence of a foreign country would mean that you could not be locked up for breaking their rules. Americans overseas are locked up every day! In reality, only diplomats can break rules and not be arrested.

The rub for me (and my daughters) is that since they have dual citizenship, they are not Natural Born Citizens of America, therefore can never run for the office of President. Bummer.

“”It would be the most beautiful executive order ever.”

“Those who still have a claim to aid from their embassy are clearly subject to the jurisdiction of their home country’s government.”

If those people are subject to another nation’s jurisdiction, they can’t be subject to that of the U.S.

As a British anchor baby, my father was in the Air Force, I was consistently told growing up that as a dual citizen, I could never run for president.

171 posted on 10/30/2018 5:58:03 AM PDT by refreshed (But we preach Christ crucified... 1 Corinthians 1:23)
[ Post Reply | Private Reply | To 169 | View Replies]
To: servo1969
Whether or not the President has the power to change this is not the point. Because Trump said it the MSM will now have to report on it. He has now introduced the topic into the news cycle which puts it on people’s radar. He is manipulating the narrative like a media jujitsu master.

+1. Howard Stern used to and maybe still does call himself the 'King of all Media'. I think President Trump has taken that title away from him. LOL.

“Why do you have to go there? Disagreeing on certain issues doesn’t make you a troll. “

Because I come from a long line of toro fecundians. Able to smell trolls and bullsh!t from a mile away. If doodle is not a troll then I’ll eat my MAGA hat.

Because under the Constitution, and the Supreme Court’s interpretation of the Constitution at the time, Indian tribes were classified as “domestic dependent nations,” and therefore, Indians were tribal citizenships, not American citizens. Their children were born in their "nations" and not in the U.S. so they were not granted citizenship. This somewhat ridiculous designation was upheld by several Supreme Court cases and was eventually done away with starting with the Dawes Act in 1887.

Probably. Unless they were somehow able to attach it to a budget bill.

You are totally correct. A person born here of “legal residency” (key words) are definitely citizens of this country, NBC may be a different matter, who the hell knows for sure on that issue?

Under no circumstance, however, should the child of an illegal immigrant be granted citizenship. PERIOD!

As hard as it is for us to belive, I’m betting there are many who don’t realize how that works. (Chain migration). This gets that whole ridiculous concept out in the open for discussion and debate. And praying the Supreme court will uphold it if it comes to that.

It's worth mentioning that Axios was started by Jim VandenHei, who started Politico after leaving the Washington Post, and Mike Allen, who was Politico's first hire from Time magazine.

Having built up Politico into the media outlet that it's become, VandenHei and Allen are trying to launch a second one to echo the messaging from the now-respected Politico.