The father of the 17-year-old charged with killing 10 people at a high school in Santa Fe, Texas, said Monday that his son was a “good boy” and had been “mistreated at school.”

Antonios Pagourtzis said in a brief phone interview with The Wall Street Journal that his son Dimitrios was bullied and “I believe that’s what was behind” the shooting.

Dimitrios Pagourtzis is being held without bond at the Galveston County Jail after he allegedly burst into an art classroom Friday morning at Santa Fe High School armed with a shotgun and pistol and opened fire, before surrendering to police. In a probable cause statement, authorities said he admitted to the shooting.

The Santa Fe Independent School District didn’t respond to requests for comment on whether Dimitrios Pagourtzis was bullied. On Saturday, it denied reports that he was bullied by high-school coaches in this small rural Texas to

Still, I think this father and the kid’s mother should be in adjacent jail cells with their son, charged as accessories.

Parents need to start being held more responsible for things their children do.

So? I was harassed and bullied, and while I did lash out by hitting the kid bullying me, I never decided to solve my bullies with my mother’s kitchen knives or my father’s guns.

The parents should be held criminally responsible.

The father is a lot like one of the Columbine fathers - who refused to accept responsibility for his son. It leads you to want to know more about his so-called fathering (and mothering) skills. Have we heard from the mother?

If a child is being mistreated at school to this extent, why on earth would a parent continue to send him to school? Courses can be done on-line at home. I suggest the father doesn’t actually know, but bullying seems to be the go-to reason these days. I want to know how long the kid has been on mind-altering medication.

> Parents need to start being held more responsible for things their children do.

Such as bullying other kids to the point of mass murdering rampages.

agreed. I think this is more common than people know. The day of the shooting, I read accounts of interviews with some of the students that said this boy was harassed and bullied constantly, including by his coach and some teachers. This sort of thing has more to do with these tragedies than parents who “let their near adult children get hold of their guns”; teenagers have always had access to guns in this country, this shit didn’t happen till liberal elitist assholes became our public school staff. If his parents are like most first gen immigrants from Europe, they told the kid to buck up and don’t complain. 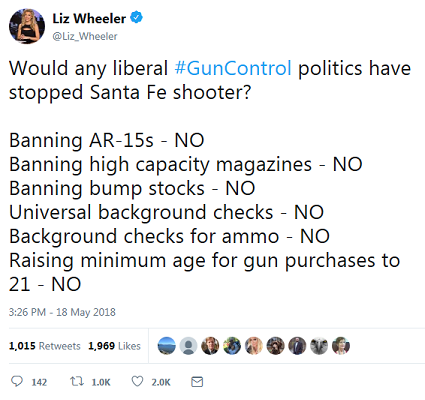 “.....father and the kid’s mother should be in adjacent jail cells with their son, charged as accessories.”........

Would you care to explain your statement?

Keep saying that.... until you have an uncontrollable juvenile delinquent for a child, and the authorities do NOTHING.

It’s not a defense, but the information so far says the shooter showed no signs that problems existed.

I mean, adolescence is like temporary insanity... Moving from childhood to adulthood. For them, adulthood is like getting an fancy new car with all the bells and whistles... but with NO driving instruction, no experience and no owners manual.

Add to all this ... that the kid is trying to cope with emotional problems associated with bullying...and any other problems in his life (family, school, girlfriend). It’s a scary cocktail for unprepared kids and every kid is a case by case example of how it’s handled or mishandled.

In all of these incidents of children killing children, I never seem to see any reference to any religious affillation by the shooters or their families. Therefore I am assuming there is none. Do these families have any visible relationship with God? Is the lack of such a common thread in all of these events?

Perhaps if they had put “In God we trust” into practice, their child and themselves could have been spared. We did and we drove to school with guns hanging on racks in the rear window of our trucks and parked in the school parking lot. It never crossed our minds to shoot any human being.

Why? In our homes and at church we were taught what Jesus said.

“Love the Lord with all thy heart, mind and soul, and love thy neighbor as thyself.” If we abide by these two commandments then the other eight become moot. The one about thy shalt not kill is not in play.

I thought with this one they showed the kid at a Greek church. That doesn’t mean he was spiritually engaged, of course.

None of the kids I bullied ever turned into Homicidal maniacs.

If your kid is building bombs in your house and in possession of your weapons without your knowledge, you’re not parenting.

“If your kid is building bombs in your house ...”

I built dozens of all varieties when I was a teenager. Estes rocket motors, homemade black powder, M-80s empties out, my mom didn’t know about it.

I never blew up a building or shot the school up.

See post 16. Kids grow up like this in a vacuum. If there really was bullying going on, the parents have options. How do I know? Because we have a bullied autistic child right now. But I can guarantee you he will not be shooting up any schools in the future.

It seems to be the factor that is always ignored in the media coverage.

Bullying doesn’t start suddenly when a kid is in high school. It begins when they are little. Usually, the kids are a little different and other kids make them outcasts and they stay that way, so it becomes a way of life. It starts with maybe being called a booger picker when they are five and escalates, they face it every day of their lives, afraid to walk down a hall, into a room. They also hide it, because they feel guilt for letting it happen to them, not fighting back, running from the bullies. It is a heinous abuse cycle and calling it being bullied is ridiculous. It Is domestic abuse and the schools are culpable, they know who the outcast are and they know who the abusers are, they do nothing.