The FBI didnt use an informant to go after Trump. They used one to protect him. [WasPo garbage]
Washington Post ^

But Trump and his backers are wrong about what it means that the FBI reportedly was using a confidential source to gather information early in its investigation of possible campaign ties to Russia. The investigation started out as a counterintelligence probe, not a criminal one. And relying on a covert source rather than a more intrusive method of gathering information suggests that the FBI may have been acting cautiously — perhaps too cautiously — to protect the campaign, not undermine it.

I wonder how many people sat around brainstorming how they can spin this. I would like to have been a fly on the wall and heard the ones they rejected.

Yeah, to protect him. Yeah, that’s the ticket.

I imagine, at this point, they are saying, we gotta print something, anything.

Can you smell the desperation?

The former FBI guy who wrote this piece...must have gotten his degree from some Cracker-Jack box. An incredible amount of stupidity and naive nature, and then trying to use the same gimmick on the rest of us.

Now you know why this crew never saw the fall of the Soviet Union coming or the attack on 9/11.

Did Asha Rangappa get fired or did she quit the FBI. Was she working as a cleaning lady? She now works at Yale. Is that the school where Billie Boggs used to lecture. She was the homeless woman who used to defecate on the sidewalk outside restaurants.

Did Asha Rangappa get fired or did she quit the FBI. Was she working as a cleaning lady? She now works at Yale. Is that the school where Billie Boggs used to lecture. She was the homeless woman who used to defecate on the sidewalk outside restaurants.

Yeah, what kind of lame BS excuse is that?

They went too far.

Nail their asses to the wall.

Counterintelligence agent. That’s a good one. That’s why they’ve been working with Trump for the past year, to clear his name. These fbi personnel are going to need some protection as well. A good, secure concrete building. With bars. For twenty years or so. Just till things quiet down.

Yes, this article is garbage, but those who depend on MSM will see it as very reasonable. I know, because I have had to endure this very argument. And when there is so much evidence, you can hardly get started, when the eyes glaze over and the stone wall goes up.

The story without as much spin:

My guess something similar occurred with the Don Jr. meeting.

And the NYT is insinuating that Trump brought this on himself by ‘asking the Russians for the deleted emails’ which was just another joke that the media didn’t (refused to) get. And they mess with the timeline in an attempt to make this point.

The Title 1 warrant was issued on Carter Page so they could bug anyone he was in contact with. If that ploy gave them an inch, then they took a mile and ran full signals collection on Trump and campaign. Carter Page already had a history with the FBI so I say he's definitely a REAL plant.

The clowns are desperate to forestall the realization that the FBI tricked the FISA court into issuing a sureveillance warrant on their UC who they had purposely planted within range of their real target, Trump. That's as dirty as it gets.

This level of offense needs to be addressed with stout hemp rope.

I think you have got something there. It explains why they are so desperate to keep their source a secret and are feeding everybody Stefan Halper to throw everyone off the scent.

Comeystain went to newly elected president Trump to tell him about a supposed pee-pee tape, not to blackmail him. < /yeahright > 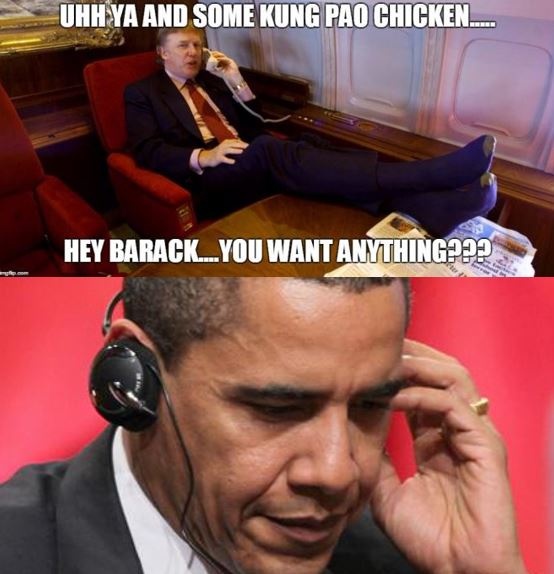 A mobster used to do this in the 1960s when JFK was f&ing his girl. The FIB would end the taping when the subject was raised.

It’s clear why freaking Valerie Jarrett moved into Obama’s D.C. Diggs after the election...they were waiting for this, good or bad, to all come out.

As an aside: before the NYT’s pulled their comment section on this story last evening even their own commentators were starting to “get it”. Talk about shell-shocked, those smug idiots were flabbergasted.