An opinionated tabloid cover can be effective, but only if the point made is so obvious that an entire audience can see and relate to it. It also helps if it is humorous and has a witty headline. What it's not is garbage that looks as though it comes straight from fake news, or compares apples to oranges in the name of promoting the propaganda of some unhappy terrorist group.

1. Taylor Allen Force, 29 years old, was stabbed to death on March 8th 2016 amid a Palestinian terror rampage. Taylor and his group were walking down the seaside promenade in Jaffa when a terrorist began stabbing anyone within reach. Besides Taylor, the terrorist also stabbed 11 others. The Palestinian terrorist, Bashar Massalha, 22 year-old, was shot dead by police after a chase. 2. Richard Leikin, 76 years old, was shot in the head and stabbed in the chest in the attack in the neighborhood of Armon Hanatziv in Jerusalem on October 13th 2015 and died two weeks later from his severe injuries. One of the terrorists, Baha Alyan was shot dead by police. The other one, Bilal Abu Ghanem, from Jabel Mukaber, (neighborhood in East Jerusalem) was sentenced to three consecutive life sentences and an additional 60 years in prison. 3. Ezra Schwartz, an 18-year-old from Sharon, Massachusetts, was on a gap year in an Israeli yeshiva. He was one of three victims killed in a terrorist attack at the Gush Etzion junction in the West Bank on November 19th 2015. The terrorist, Muhammad Haruv from a village near Hebron was sentenced to four life prison terms. 4. Gilad Shaer, 16 years old, was one of the three teenagers who were kidnapped by Palestinian terrorists from the bus stop near Alon Shvut in Gush Etzion. The kidnappers, Marwan Qawasmeh and Amar Abu Aysha were killed on September 23rd 2014 in a military operation in Hebron. 5. Haya Zissel-Brown, A three-month-old baby, was killed and seven other people were wounded when a Palestinian drove his car into a light rail train station near Ammunition Hill in Jerusalem on October 22nd 2014. The terrorist, Abdel Rahman Al-Shaludi, a Palestinian resident of the East Jerusalem neighborhood of Silwan, was shot by police and died from his wounds at the hospital. 6. Christine Logan, 45 years old, was on a hike in the Beit Shemesh area, southwest of Jerusalem, on December 18th 2010, when two terrorists, Kifah Ghanimat and Ibrahim Ghanimat, residents of the Hebron area, stabbed her and another woman. Kifah Ghanimat, the leader of a Palestinian terror cell of four members, was sentenced to two life sentences and 60 years in prison and Ibrahim Ghanimat received a life sentence and 16 additional years in prison. 7. Daniel Waltz, 16 years old, was severely injured on April 17th 2006 when a Palestinian suicide bomber, Sami Abdel Hafiz Antar from Nablus, approached a crowded restaurant near the old Central Bus Station in Tel Aviv. Daniel, who was visiting Israel with his parents, died at Ichilov hospital in Tel Aviv, almost a month after the attack. 8. Shmuel Taubenfeld, three months, of New Square, New York, and his mother, Goldie Taubenfeld, 43, were two of 23 persons murdered by a suicide bomber, Raad Misk, on a No. 2 Egged bus in the capital's Shmuel Hanavi neighborhood on August 19th 2003. 9. Steve Averbach, 44, died on June 3, 2010, succumbing to injuries suffered in the May 18th 2003 suicide bus bombing in Jerusalem. 10. Marla Bennett, 24, of California (USA); 11. Benjamin Blutstein, 25, of Pennsylvania (USA); 12. Janis Ruth Coulter, 36, of New York (USA); 13. Dina Carter, 37, of Jerusalem (USA); 14. David Gritz, 24, of Massachusetts (USA-France); Were all killed at The Hebrew University Massacre on 31 July 2002 in a cafeteria at the Mount Scopus campus of the Hebrew University of Jerusalem. 9 people were killed in the attack, including 5 American students. The terrorists who carried out the massacre were Wisam Al-Abbasi, sentenced to 26 life sentences and another 40 years, Muhammad Ouda, who laid the bomb and who was sentenced to 9 life sentences and another 40 years and Alaa Al-Din Al-Abbasi, who was sentenced to 60 years in prison. 15. Shoshana Yehudit (Judy) Greenbaum, 31, (5 months pregnant), from New Jersey, was killed at the Sbarro restaurant suicide bombing in downtown Jerusalem on August 9th 2001, in which 15 civilians were killed, including 7 children. Izz al-Din Shuheil al-Masri carried out the suicide bombing. Abdallah Barghouti, who constructed the explosives and who was involved in a string of other attacks in which 66 civilians were killed, was sentenced to 67 life sentences. Ahlam Tamimi, who drove the suicide bomber to his target was sentenced to 16 life sentences but was released as part of a prisoner exchange (Gilad Shalit prisoner exchange). Currently she hosts a television show about Palestinians in Israeli prisons. Mohammad Daghlas was sentenced to 15 life sentences but was released as part of a prisoner exchange (Gilad Shalit prisoner exchange)

The daily news is a low-IQ rag, written with words under 3 syllables, for fools and idiots who can barely read.

New York, Los Angeles. San Francisco, Chicago, etc., etc., etc. ALL big cities are so completely controlled by the Left and they think they can dictate to the rest of us what will be. Remember when Obama said people should be moving back to the cities? That we should have a rail system so people could go to other cities? (Just like Europe). That was 8 years of trying to remake America, in the vision of the Dem controlled cities. Trump is trying to give America back to it’s citizens. Enough of the failed policies of the Dems!

The NYD cover is grossly antisemitic and therefor perfectly in keeping with leftist groupthink.

Amazingly stupid for a mass market newspaper in a city with more Jews than any other outside of Israel. Those who aren’t Jews have friends who are Jews. The self-hating Jews read the Times, so they are out of the picture. Ivanka looks great, as usual, and the visual of a pleasant lovely woman overshadows the stupid headline anyway.

The Hamas mob chanted, "Allahu Akbar" and the genocidal racist threat of, "Khaybar Khaybar, ya yahud," a reference to the primal Islamic massacre of the Jews. While IDF soldiers held back the invaders, the jets of the IAF targeted the snake's head striking Hamas compounds and outposts. By 5.30 PM, the Hamas organizers changed course and began urging the thugs away from further fence attacks. Hamas had offered $100 to every rioter. During previous violent assaults back in April, the Muslim Brotherhood terrorist group had been offering $200 to anyone shot by Israelis, $500 for severe injuries and $3,000 to the dead. $100 a day may not seem like a lot, but the Israeli teen soldiers they're trying to kill, earn $13 a day. [Thousands of Gaza Hamas Thugs Attack Israel for $100 a Day | Frontnpagemagazine | May 15, 2018 | Daniel Greenfield | Posted on 05/15/2018 4:32:24 AM PDT by SJackson]

I would never bring up the fact that this smacks of Anti-Semitism or at the very least, Anti-Judaism. 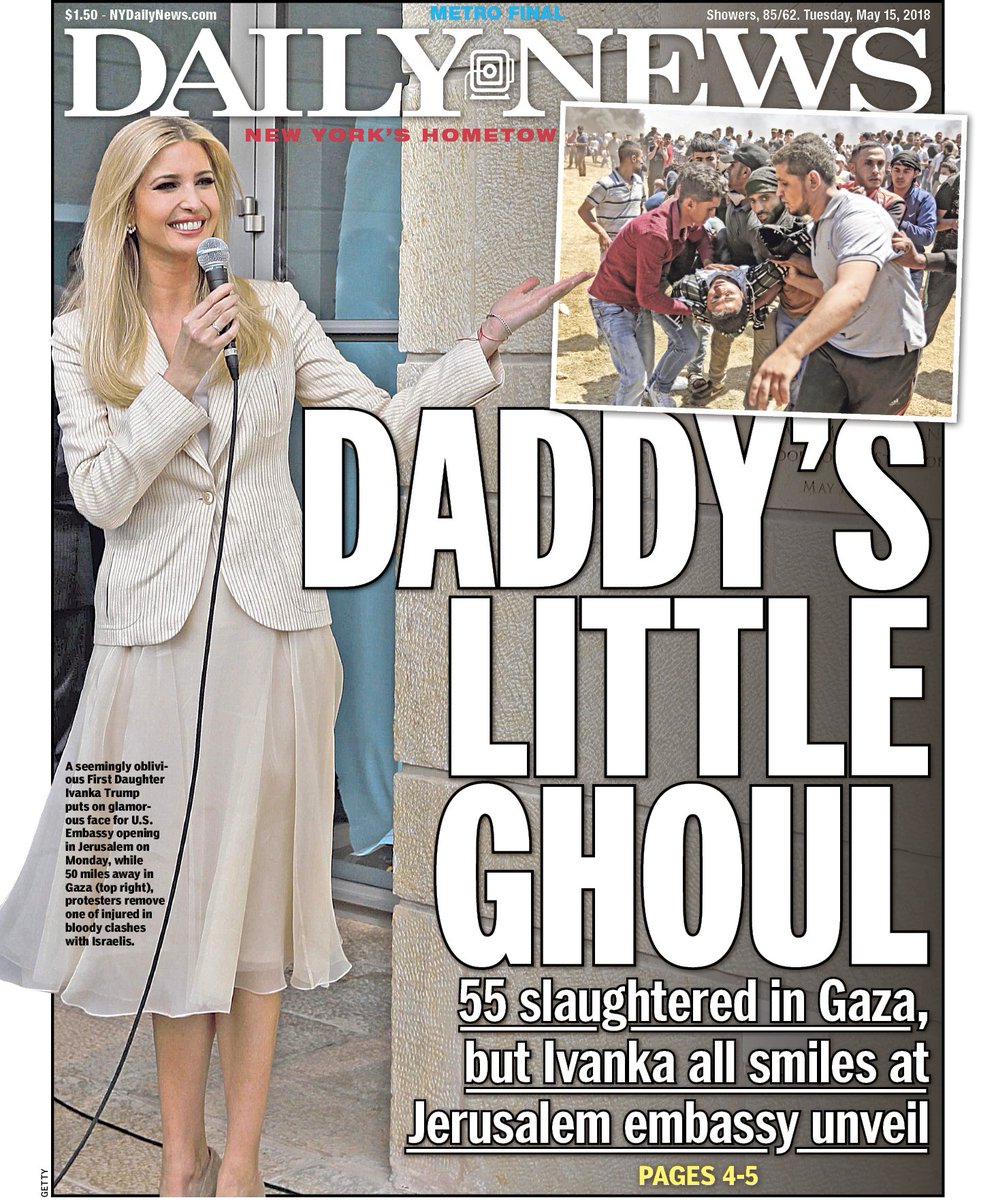 I wonder if any of these attacks are moving Ivanka to the Right?

Where is the FRAUD Mort Zuckerman to condemn this? This is beyond decency.

The editor in chief of the Daily News is a Jew

As is most of the editorial board

If Obama had done this they’d love it

Left wing “Jews” have no problem defaming Israel or Jews to pursue their own power and leftist goals. The British-colaborating Labour Junta in Israel in 1948 manufactured the Deir Yassin Massacre to undermine Revisionist Zionists, and it has been used to attack Israel ever since.

Oh, those poor, innocent “Palestinians” just minding their own business when the Israelis decided to mow them down for no apparent reason.

And how does that explain the similar attacks by the "elite" rags, like the San Francisco Comical, the New York Crimes and the Washington Compost (and its 57 minion newspapers around the country)?

I had never heard of it

Disgusting! Everyone should cancel their subscriptions!

But NYC will decide all of the electoral college votes for the whole state of NY, sad to say. And the high population count of NYC boosts the number of representatives they have in the US Congress. I won't even go into what I think of their rididulous mayor and governor.