Here's how much ground ISIS has lost since Trump took over
Washington Examiner ^ | Dec 23, 2017 | Jamie McIntyre

The defeat of the Islamic State in Iraq and Syria rapidly accelerated during President Trump’s first year in office, beginning with the fall of East Mosul on Jan. 25, and continuing with a cascading series of defeats for the brutal terrorist group over the next 11 months.

The campaign liberated twice as many people and twice as much territory as in the previous 28 months under President Barack Obama, according to Defense Department figures.

On Jan. 20 — the day Trump was inaugurated — an estimated 35,000 ISIS fighters held approximately 17,500 square miles of territory in both Iraq and Syria.

As of Dec. 21, the U.S. military estimates the remaining 1,000 or so fighters occupy roughly 1,900 squares miles of mostly barren desert primarily in Syria, where few people live, and where they will be forced to surrender or die.

Between September 2014 when the counter-ISIS campaign began, and January 2017, U.S.-backed forces in Iraq and Syria liberated 13,200 square miles of territory and 2.4 million people from Islamic State rule.

In the 11 months since Trump took office, an additional 26,800 square miles have been reclaimed and 5.3 million people have been liberated. The tipping point in the more than three-year war was the defeat of ISIS in its self-proclaimed capital in the northern Iraqi city of Mosul, which followed eight months of what the top U.S. commander called “the most significant urban combat to take place since World War II.”

When the western part of the city fell in June, thousands of civilians had died, but Iraqi forces prevailed and the will of ISIS had been broken.

“It just snowballed, and it turned into where we are right now, with a full liberation of Iraq, and in Syria, continuing to chase down ISIS elements, the remnants of ISIS elements, in Syria,” said Col. Ryan Dillon, the chief U.S. spokesman for the U.S. led coalition, known as Operation Inherent Resolve.

The liberation of Mosul was followed quickly with victories in Tal Afar, Hawija, and Al Qaim in Iraq in late summer and fall, and then a crushing blow as the Islamic State’s other capital, Raqqa, fell to U.S.-backed Syrian fighters.

It’s not unusual for the most dramatic battlefield gains to come at the end of a conflict when the enemy has been routed, and cities fall like dominos.

And while the destruction of the ISIS caliphate was a validation of the Obama strategy of working “by, with, and through” partner forces, U.S. commanders gave Trump and Defense Secretary Jim Mattis credit for ending what was largely perceived as micromanagement and overly restrictive rules of engagement under Obama.

“Commanders now don't, aren't constantly calling back to higher headquarters asking for permission,” he said. “They're free to act.”

“These delegations of tactical authorities from the president has really made a difference on the ground,” McGurk said in August, “I've seen that with my own eyes.”

Critics of the shifted strategy point out that looser rules of engagement bring higher levels of civilian casualties.

The analysis released by U.S. Central Command concluded that of 56,976 separate engagements between August 2014 and October 2017, the percent of strikes that resulted in a credible report of civilian casualties was 0.35 percent.

Press investigations and outside groups put the tally of civilian casualties much higher, and say the casualty rate has drastically increased since Trump changed the rules. A New York Times investigation has shown the air war has been less precise under Trump. An investigation by the Associated Press said the nine-month battle for Mosul claimed 9,000 to 11,000 innocent civilians, and said the coalition, Iraqi forces and ISIS all share in the blame.

Yet military officials take great pains to point out how accurate their targeting systems are, and say ISIS is responsible for the bulk of civilian deaths.

“I say this with full conviction: The responsibility for civilian casualties in Iraq and Syria lies with ISIS, who have brought misery and death to this region,” Townsend said.

As the year closes out, ISIS has lost 98 percent of the territory it once held across Iraq and Syria, more than 40,000 square miles. “And they have not regained a single meter of those territories,” said Dillon, the chief military spokesman in Iraq.

But don't expect a "Mission Accomplished" banner like the one that infamously served as President George W. Bush's backdrop on the aircraft carrier Abraham Lincoln after the Iraq invasion in 2003. The Pentagon is well aware that the diminished number of ISIS fighters in the Middle East is still a threat, and can still use online propaganda tools to inspire lone-wolf attacks in the U.S., Europe and elsewhere.

"So right now, clearly ISIS is getting broken," Mattis told reporters on Dec. 15. "I think there's still problems, the fight is not over with them, don't believe it when somebody says that ISIS is completely down. We're continuing to fight them, they're on the run, they can't hold against our alliance at all."

The last map was too big. This one is too small. Maybe the next one will be just right.

3 posted on 12/22/2017 11:13:45 PM PST by FreeperCell
[ Post Reply | Private Reply | To 2 | View Replies]
To: Telepathic Intruder
I can help with posting the map. No need to resize using Tinypic, etc. Just post straight from the article and use the width modifier to set the width. Like this: 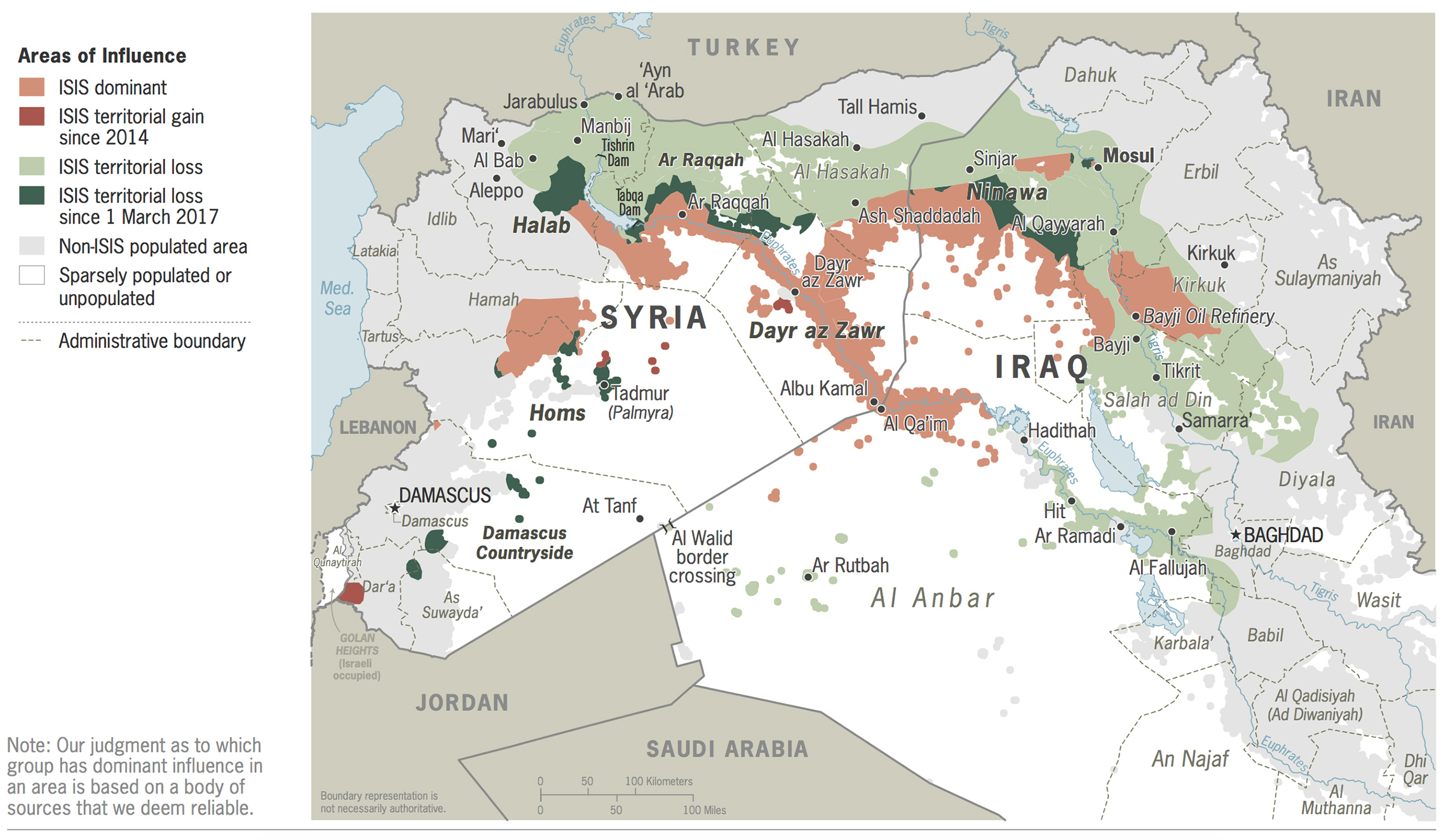 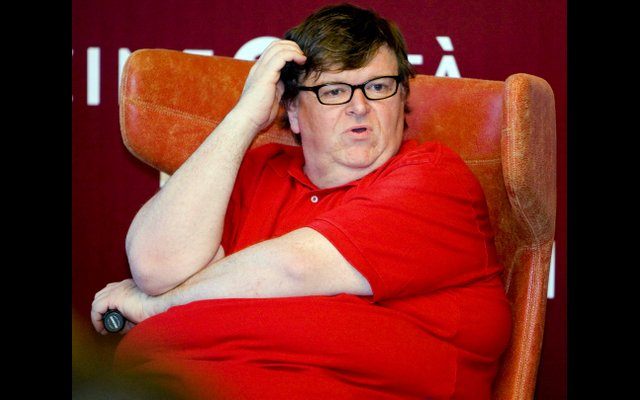 This is how they make Michael Moore look so lean.

Thank you for your resizing efforts. Much appreciated by those on iPads.

News that has gone ignored by the Fake News establishment.

A smashing success and job well done by our CIC, General Mattis and our beloved troops.

Amazing what happens when you get a real CIC willing to unshackle our fighting forces.

It should have been done years ago, but the President and his commanders played the hand they were dealt.

9 posted on 12/23/2017 12:39:16 AM PST by jazminerose (Adorable Deplorable)
[ Post Reply | Private Reply | To 1 | View Replies]
To: jazminerose
When the entire Ayrab world took on Israel and got an ass whoopin' in a week, I figured out that the rags could fight about as well as Richard Simmons in a slap fight.

They are vaginas and are taking up space on the planet Earth that could be put to better use.

Trump is doing a great job, but the game-changer was when Russia entered on the side of Assad. SDF (Kurds and other religious minorities including Christians) was down to just a few dozen acres left in one border town.

Wow, imagine if ianother power like Russia had helped kill ISIS and even tried to cooperate with us ... instead of letting us do all the heavy lifting

They’re down to remote stretches of desert SE of Ash Shaddadah, S of Dayr Az Zawr, and some camps they’ve won from Al Qaesa NW of Tadmur and that red spot in Dara.

ISIS areas of influence as of May 2017. (Map courtesy of the Global Coalition Against Daesh) The map is out of date. Raqqah and the surrounding province are liberated, as is Der Ez Zor and the western shore of the Euphrates. Homs Province is liberated. The whole of Nineveh is liberated.

Why report on the eradication of Isis when we can focus on more important issues, like Rose McGowan's opinion of sexual harassment in Hollywood?