A three-judge court panel ruled Wednesday that a World War I memorial in the shape of a cross in Bladensburg, Maryland, is unconstitutional, a decision that a legal scholar says could imperil other similar memorials.

In a 2-1 decision, the U.S. Court of Appeals for the 4th Circuit said the 40-foot cross erected 92 years ago violates the First Amendment’s Establishment Clause.

“The monument here has the primary effect of endorsing religion and excessively entangles the government in religion,” Judge Stephanie Thacker wrote for the majority. “The Latin cross is the core symbol of Christianity. And here, it is 40 feet tall; prominently displayed in the center of one of the busiest intersections in Prince George’s County, Maryland; and maintained with thousands of dollars in government funds.”

The Bladensburg World War I Veterans Memorial is dedicated to 49 servicemen who perished in WWI. The cross is owned and maintained by the Maryland-National Capital Park and Planning Commission, which acquired it from the American Legion in 1961 due to development around the cross.

In 2014, the American Humanist Association filed a lawsuit asking for the cross to be demolished or altered, such as by removing its arms “to form a non-religious slab or obelisk.” 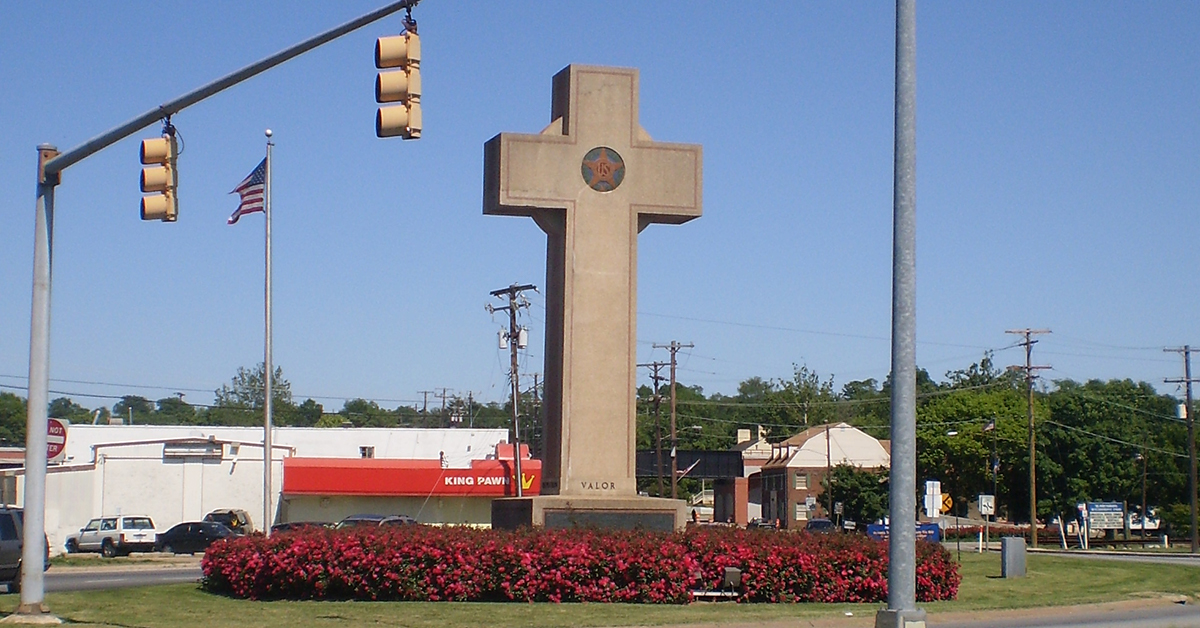 I drive past this cross every morning on the way to work. It is in no way religious...it is simply a patriotic display.

I wonder when the "American Humanist Association" is going to sue to have all crosses removed from the headstones at Arlington.

I am more offended by the ugly pawnshop in the background.

Let the judge tear it down.

Time to start ignoring these frigging tyrants. The memorial does not endorse or promote religion.

Good Grief! Get A life You Liberals!

Humanists being a-holes sounds like to me.
Not to mention two stupid judges.

Does the Federal Government not maintain the Crosses and Star of David Headstones at Arlington?

Time to yank those puppies out of there I guess.

“the American Humanist Association filed a lawsuit asking for the cross to be demolished or altered, such as by removing its arms “to form a non-religious slab or obelisk.”

these aholes need to get their asses kicked

It sounds like The American Legion should take it back. Or, maybe a church w/ deep pockets.

How many divisions does the US Court of Appeals for the 4th district have?

I am sick and tired of all this “anti-American” BS going around...

It seems the only way to stop it outside of outright war is by our votes...

They will get them kicked permanently, when they meet their Creator! He will not do it but their lord, satan and his minions will, for eternity.

“the American Humanist Association filed a lawsuit asking for the cross to be demolished or altered, such as by removing its arms “to form a non-religious slab or obelisk.”

Yes, because its so threatening to their sensibilities.

Stick a muzzie moon star up and see how long it takes some liberal judge orders it down. 92 years?

Even if it did promote religion. Who cares??

Charlottesville was only the beginning.

I guess a lot of legal fees have flowed under the bridge since then.

If the town gives or sells the land to a private owner, the monument will probably be able to remain.