The leftist extremists are the true "threat," not the "marginal bozos" of universally condemned hate groups, and "idiot Republicans" are getting sucked into the "ludicrous and ridiculous... charade... to destroy the presidency of Donald Trump," best-selling author David Horowitz told Newsmax TV.

"If there's a serious fascist movement in America, it's the left," Horowitz told guest host Jonathan Gilliam on Thursday's "The Schnitt Show." "They're the ones who go around to cities picking fights, violence — they want to shut up other people. Even these alt-right clowns were not about shutting up the opposition and suppressing it.

"One fascism in America, it's coming from the left – with the support of the Democratic Party I should say. That's the reality."

Horowitz, who himself was once liberal/progressive before rejecting that path for conservatism in the 1970s, said the narrative of President Trump as supportive of neo-Nazis is "fiction... cooked up by the left to attack Trump."

"Donald Trump is, unlike our previous president Obama, is very pro-Israel, and he's the first American president that has Jewish family for crying out tears," Horowitz exasperatingly told Gilliam. "This is so ludicrous and ridiculous — and that's what conservatives and Republicans should be saying.

"This is a charade but its one purpose is — from the time he was elected — the Democrats were going to out to destroy the presidency of Donald Trump, to undermine, to sabotage it, and that hurts all Americans." 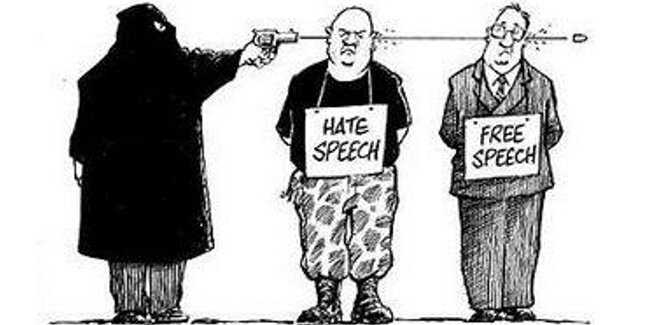 Horowitz, once a Red Diaper Baby, was ‘in the belly of the beast’ and knows exactly who and what the Left and demoncrats are.

Horowitz is probably one of the few democrats I’ve ever liked. Don’t agree with everything fuzzy has to say, but he truly reasons through a subject....not spouting nonsense due to feeeelings or emooootions.

Agreed Fully agree with u

25 posted on 08/19/2017 6:52:53 PM PDT by faithhopecharity ("Politicans are not born, they're excreted." -- Marcus Tillius Cicero)
[ Post Reply | Private Reply | To 9 | View Replies]
To: ForYourChildren
"idiot Republicans" are getting sucked into the "ludicrous and ridiculous... charade... to destroy the presidency of Donald Trump,"

That about sums up the political history of GOPee.

And, I just want to emphasize, these dolts are correctly the target of our Alinskian ridicule. They are simply disgraceful, Linda, McLame, Full of Sass, oh and Turtle.

Romney, McCain, McConnell rushed to microphones this past week to show their ass-hole-ed-ness.

Yes; Horowitz is wonderful. I put a lot of stock in what people like him and Tammy Bruce say and think. They’ve come over to the right side after being strong activists for the left for a long time. They understand what’s going on because they’ve lived it.

I don't think "fallen for it" is the correct expression. These Republicans deliberately align themselves with the anti-Trump forces. Like Dems, they just want to hold onto power, and they don't like the fact that Trump is trying to cut back on Washington DC's power. It is a fight for the Nation - and the majority of the Republican overlords in Congress are aligned with the forces that want increase the Fed's control of our lives.

Eric: David Horowitz was not just a liberal/progressive, he was a hardcore Red Diaper Baby and says so in his books.

He was the heart, if not the brains of “Ramparts” magazine, many of the California university protests, and if memory serves me correctly, the Marxist/communist dominated National Conference for New Politics, among other communist united front conferences/groups.

Fortunately he and colleague Peter Collier intellectually woke up to who they were in with and defected to sanity and conservatism.

Among his books worth reading are “Destructive Generation” and “The Shadow Party” as well as his website “www.Frontpagemagazine.com” and “www.DiscoverTheNetwork.org”.

Dave has done a yeoman’s work over many decades to expose the real nature and threat of the “Left” - not progressives, no socialists, not anti-fascists - the names they like to fool the media with, but hardcore enemies of America, communists/Marxists/terrorists.

It’s why almost everybody hates congress.

Jerseys has to do with football, I guess. That is a game about yardage.

I think that the anti-trump in the republican party comes from republicans that are caught up in the pay to play scandle that hillery is involved in or are individuals that hillery has blackmail material on.

I don’t believe I realized that our President Trump is the first one to have Jewish family members. After this sickening week with all the know players piling on President Trump with the lie of nazism, this is the moment I actually feel a sense of peace, there is no way imho that our Lord will fail this man and his family.

We need a list of these Establishment RINOs, especially those up for reelection in 2018. They need to be defeated and replaced with those who “promise” to help President Trump pass his agenda.

We’re idiots for continuing to re-elect them.