All three networks on Tuesday worried about Donald Trump’s “lack of curiosity” in the wake of a “startling” new climate change report. After discussing a draft report leaked to the New York Times, Good Morning America’s George Stephanopoulos sneered, “No word yet on whether they will suppress, dismiss, or endorse the report.”

On CBS This Morning, Major Garrett offered a lecture: “The lack of comment from officials here and from those at some of the relevant federal agencies about this report's startling conclusions suggest not just skepticism but, at least initially, a lack of curiosity.”

Speaking of curiosity, CBS This Morning could use some more of it. Last week, when the Dow skyrocketed past 22,000, the show skipped the story.

Over on NBC’s Today, Matt Lauer peppered Nikki Haley about the global warming report, demanding, “Given the fact we just pulled out of the Paris Climate Accord, will the administration embrace the results of this study?”

After failing to get the answer he sought, Lauer tried again: “Will we embrace the results of this report from 13 federal agencies?”

[Today’s biased segment on CBS was brought to you by Toyota, Blue Diamond nuts and Discover. ]

A transcript of the CBS segment is below:

MARGARET BRENNAN: The Trump administration is studying a draft report on climate change that was leaked to the New York Times. The research by 13 federal agencies says it's possible to attribute some extreme weather to climate change. They say average U.S. temperatures have risen rapidly since 1980 and are now the warmest in 1,700 years. Major Garrett is near the Trump National Golf Club in Bedminster, New Jersey. Major, good morning.

MAJOR GARRETT: Good morning. President Trump's skepticism about the link between global warming and greenhouse gas emissions is well known. Now, this report awaits White House release. And the lack of comment from officials here and from those at some of the relevant federal agencies about this report’s startling conclusions suggest not just skepticism but, at least initially, a lack of curiosity.

DONALD TRUMP: Obama's talking about all of this with the global warming and a lot of it's a hoax.

GARRETT: Mr. Trump has a history of challenging the science behind climate change including once suggesting, quote, “The concept of global warming was created by and for the Chinese.” But a draft report from 13 federal agencies asserts the impact of climate change is being felt right now, creating higher temperatures and even causing some extreme weather events.

SCOTT PRUITT: I don't believe that climate change is a hoax.

GARRETT: Scott Pruitt, Administrator of the Environmental Protection Agency was forced to admit he doesn't believe climate change is made up. But since being confirmed by the Senate, Pruitt has questioned human involvement.

SCOTT PRUITT: I think measuring with precision human activity on the climate is something very challenging to do. There is tremendous disagreement about the degree of impact.

DONALD TRUMP: I was elected to represent the citizens of Pittsburgh, not Paris.

GARRETT: In June, President Trump pulled out of the Paris climate accord, a global agreement aimed at reducing greenhouse gas emissions. The President said the decision was to protect American jobs and he promised to protect the environment.

Trump is too smart and TOO KNOWLEDGEABLE to be taken in by these phony studies. Boo hoo ... cry your hearts out, “nets”.

One if the many reasons that journalists are only journalists is that math was Greek to them.

As it also appears to be with a good many climate “scientists”.

I will stick with one of N reasons to disbelieve their offal (where N is very large): name some predictions that have been proved true.

There are plenty of physics/math based reasons also.

Along with a multitude of emails amongst that crowd admitting alteration of data.

In summary: Science of any kind is not in their talent drawer.

There’s billions to be made in man made climate change. There’s ample proof that the data has been altered or massaged to prove it exists.
In fact, when the “global warming” scam began to fail, it suddenly became “climate change” to justify continued government research money payments from the government as long as the results showed rising temperatures usually through data manipulation. Liberalism and the Democrat party are built on lies and deception, and the resulting money and power to be gained from them.

FAKE report on a FAKE subject.. who gives a rats ass.

8 Aug: Daily Caller: Michael Bastasch: NYT Caught Switching Out Documents To Fix Botched Climate Change Article
The New York Times has quietly updated its Tuesday front page article on a “sweeping” global warming report some scientists fear “would be suppressed” by the Trump administration.
However, The NYT published a “third order draft” of the NCA that’s been available online since January. The National Oceanic and Atmospheric Administration published the draft online in March...
http://dailycaller.com/2017/08/08/nyt-caught-switching-out-documents-to-fix-botched-climate-change-article/

how’s this from Mr. Ethics?

9 Aug: Reuters: Al Gore says ‘ethical reasons’ could end Trump presidency early
BERLIN (Reuters) - Former U.S. Vice President Al Gore suggested on Tuesday that the presidency of Donald Trump could end prematurely for “ethical reasons,” drawing laughter from a packed movie theater at the European premiere of his latest film on climate change.
“We’re only six months into the experiment with Trump. Some experiments are ended early for ethical reasons,” Gore said, acknowledging the “provocative” nature of his comment....

“We have a global agreement and the American people are part of this agreement in spite of Donald Trump,” he told hundreds of moviegoers at Berlin’s Zoo Palast cinema after a showing of his new film, “An Inconvenient Sequel: Truth to Power.”
“We can win this ... All we need is the political will,” he said, adding his hope that the United States would “soon once again” have a leader who was committed to halting global warming...
http://www.reuters.com/article/us-usa-trump-gore-idUSKBN1AO2MD?il=0

Where is the MSM curiosity about the Comey antics, the biased Trump investigation, the unmasking of Americans, the Clinton/Loretta Lynch meeting, Benghazi, Debbie Wasserman Schultz, Mark Rich, the uranium deal, Hillary emails, pay for play, and numerous other Democrat scandals?

One problem with the stupid is that they have no awareness of their sad condition.

Why would anyone be curious about nonsense?

No, it’s Trump’s lack of gullibility.

I’ve never seen a president endure so many lectures from so many people who know squat. It’s so condescending it’s sickening. Really drives home the fact that out “betters” think we’re idiots.

We should have more faith in our experts. Remember how the Club of Rome predicted that we would run out of oil by 1992. The world has never been the same.

Nothing to be curious about. More fake science. Same old same old. 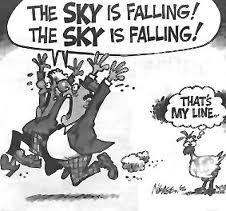 Ignoring #FakeScience is a laudable trait!

The sky is falling every summer.