The yearbook advisor at a central New Jersey high school had been suspended after the President Trump logo on students’ clothing vanished from their final photo.

Grant Berardo, 17, says that he was shocked to find his “Trump: Make America Great Again” shirt had lost its political message in Wall High School’s “Behind the Scenes” book for 2016-2017.

Wall Township School Superintendent Cheryl Dyer said that the district is investigating why that image, and Trump’s name on another student’s sweater vest, were wiped out.

Dyer’s office confirmed ... that an unidentified teacher was suspended pending an investigation.

Mrs. Susan Parsons is listed as the yearbook adviser on Wall High’s website.

Why do I have a feeling she was "with her"?

Censorship for thee, but not for me.

But if this kid wore a che gueverra shirt or a fag flag, he would’ve been made class valedictorian, Gov. Christie would invite him to the State Capital and the UN Gen Assy would make him an Honorary Human Rights Ambassador.

It amazes me that this teacher, Kathy Griffin, etc. all think that Trump is such an aberration, that it is ‘ok’ to do these things. They have no concept that somebody would actually disagree with them. Who do they think voted for Trump...Martians?

Yet I am sure if he wore a Hillary or Obama shirt, then it would not be censored.

From what I’ve read, the kid’s father is a CEO and is threatening to sue the school district unless they reprint all the yearbooks with the censored content put back in place.

The mayor of Jackson, WY should take note of the teacher’s outcome...

Now how in the world is suspending a teacher over summer break in anyway going to change her behavior? Might as well put her on secret probation while they are at it.

The school should not only suspend her but should also make her pay the cost of reprinting the yearbooks with the original photos and and quotes intact as well as the costs of reissuing the yearbooks.

The photo of the basketball team was, in fact, a photo of five ‘Butterfinger’ candy bars...

The thing is, he is our President. Used to be that the President was honored with pictures in every school. How sad that school personnel are so against our country. 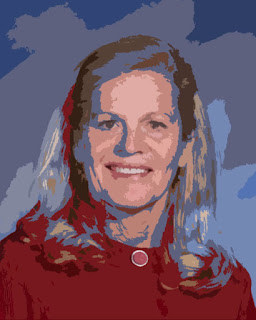 " Interesting is how Mrs. Parsons Technology Page has a photo of Susan Parsons that strangely resembles the Obama "Hope" poster designed by artist Shepard Fairey."

Suspension during the summer, while not obvious to the students, can still affect her paycheck.