Complete Headline: Chelsea Clinton receives award for volunteering with her family's foundation after insisting she's not running for public office Chelsea Clinton urged the importance of fighting hunger as she was honored at a New York charity gala on Tuesday night.

Does a day go by anymore when Chelsea Clinton is not in the news? I don’t think so. Clearly she and her supporters are working at increasing her public profile for a future political run.

I liked it better when they just gave it to each other in bathroom stalls instead. That or Peter Dinklage’s gooch.

Oh gee, how nice, Chelsa Clinton gets a “participation” award. I am already tired of hearing how great the phony is, she is a clone of her mother and belongs in jail with all of them. If anyone had the time to do some digging they will find she is sucking from the Clinton Foundation just like her parents. they are all crooked bastards needing serious JAIL TIME.

Leaked Swiss bank files show the Clinton Foundation was funded by a Canadian mining magnate who created uranium and gold mines around the world -- devastating Indigenous Peoples and their lands -- leaving behind a trail of death of mining resisters from Guatemala and Mexico to Africa and Asia.

While bilking the world’s energy resources, Canadian mining magnate Frank Giustra posed as a philanthropist. Giustra cut deals for uranium mining in Kazakhstan on tour with Bill Clinton. Giustra then donated $31 million of uranium mining dollars to the Clinton Foundation. This is just one example of the millions flowing to the Clinton Foundation from the mining magnate as they posed as philanthropists.

Carlos Slim Helú, the Mexican businessman and one of the richest persons in the world (bought the NY Times), joined with Giustra and Clinton. They posed as philanthropists fighting world hunger while bilking the world’s energy resources.

Posing as philanthropists, Clinton flew to Africa to "fund raise for the poor" with convicted sex offender Jeffrey Epstein, now the center of a global probe into pedophiles and child sex abuse.

Now mining magnate Giustra is advising Endeavour Mining on new gold mining in Africa. According to the Guardian newspaper on Tuesday:

Leaked files from HSBC’s Swiss banking division reveal the identities of seven donors to the Bill, Hillary and Chelsea Clinton Foundation with accounts in Geneva.

They include Frank Giustra, a Canadian mining magnate and one of the foundation’s biggest financial backers, and Richard Caring, the British retail magnate who, the bank’s internal records show, used his tax-free Geneva account to transfer $1 m into the New York-based foundation.

Another Clinton foundation donor who had a HSBC account in the tax haven is Jeffrey Epstein, the hedge fund manager and convicted sex offender who once flew the former president on his private jet for charity events in Africa. The identities of Clinton supporters who banked with HSBC in Geneva are contained in internal bank data leaked by a HSBC computer expert turned whistleblower, Hervé Falciani.

Giustra's bio shows he is an early architect of many resource companies, including Wheaton River Minerals (now known as the $33B Goldcorp, which spun out the $12B Silver Wheaton), Petro Rubiales (now the $7B Pacific Rubiales), and Urasia Energy, Geo.ca reports.

News reports reveal Goldcorp and its subsidiaries are responsible for the assassinations and disappearances of Indigenous Peoples around the world. One woman in Guatemala describes her husband, a mining resister, who was burned alive, while protesting the Marlin mine owned by Goldcorp in Guatemala. “They took him and poured gasoline all over him. Then they struck a match and lit him.” “They asked him, “Why are you against the mining?” They were wearing hoods. They asked him, “Why are you against the company?” That’s why we knew they were members of the company," David Hill reports in the Guardian.

BIO Giustra He founded Clinton-Giustra Sustainable Growth Initiative in June 2007. Mr. Giustra serves as a Trustee of International Crisis Group (The) and, Streetohome Foundation. He is the President and a Director of the Radcliffe Foundation and a Trustee of the William J. Clinton Foundation. He and former US President launched the Clinton Giustra Enterprise Partnership, alleviating poverty in the developing world through education, training and supply chain distribution. -- Bloomberg Business

When did getting paid equal volunteering?

She got an award for watching her underlings pack 25,000 pounds of grapefruit. Alrighty then.

I hope she runs for office as soon as possible

So we can all HUMILIATE ANOTHER CLINTON!

I hope that graphic gets tweeted/retweeted a million times, with this #FakeNews article.

This gal needs to slink away, into the dustbin of sad history.

Wow, she sure is aging quickly!

In a perfect and just world all Clintons would be made to live in Haiti,Syria or Libya and lose all of their wealth. BILLIONS disappeared on HRC’s watch. That in itself should have put her in prison along with her loser of a daughter. This POS Chelsea is being groomed within the Clinton Crime Syndicate and her sycophant a**kissers make me sick. I HATE these people! This country can’t take much more of the FU from elites and anti-American scum like the POS Clintons. 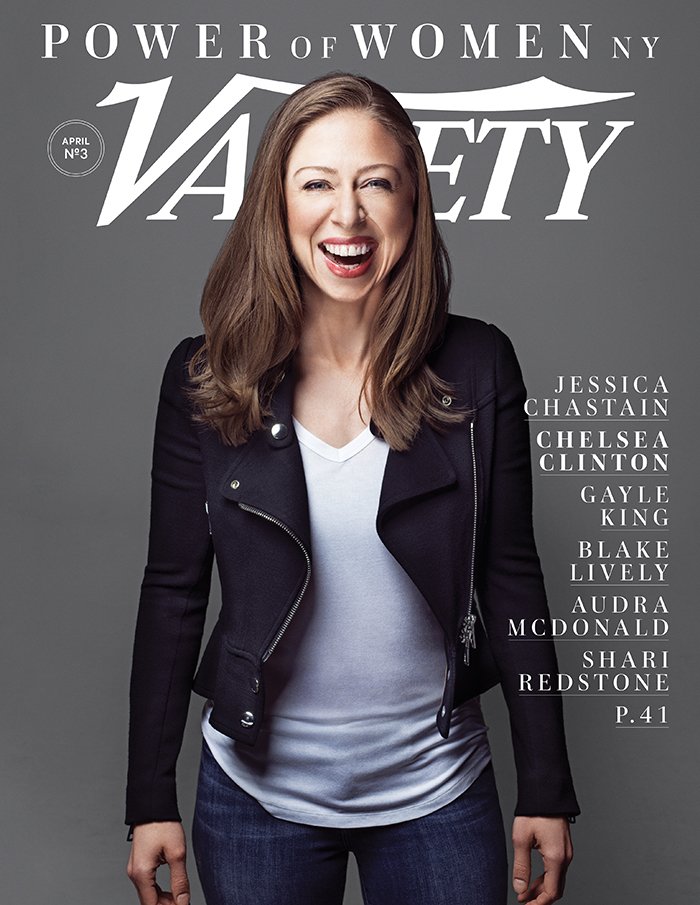 Another ‘Caroline Kennedy’ type sibling in the making?

This year’s model of a participation award?